Why do people buy elephant ivory?

China made history by banning elephant ivory sales in 2017; now WWF is working to stop the demand

As soon as I push open the shop door and step inside, the busy sounds of Hong Kong—the pelting of the midyear monsoon rains, the cacophony of bumper-to-bumper traffic, and the rapid-fire chatter of Cantonese on the street—begin to fall away. There’s now a sense of calm and order. Neat rows of display cases and glass cabinets, pushed against the walls or placed in the middle of the room, gleam silently under the shop’s fluorescent lights.

Within each case lie hundreds of items. At a sweeping glance, they all look similar—off-white with yellow or brown hues, smooth and creamy in texture, like solidified milk. But a closer look reveals otherwise. There are chopsticks and chess sets, necklaces and name seals. There are statues of the Three Wise Monkeys and the Goddess of Mercy. There are intricate carvings depicting scenes from Chinese myth and folklore—bearded men bearing scrolls, suited warriors riding antlered deer, dragons and phoenixes flying through rolling clouds.

The array of objects on offer is staggering, but so is what they’re made from: the tusks of elephants—ivory.

“The loss or endangerment of any species has an undeniable ripple effect. Stopping the illegal ivory trade and ending the demand for elephant ivory products will take smart, interconnected efforts across the planet. But it is possible, and we are so pleased to support a mission that promises such hope and widespread impact.”

Only about 415,000 African elephants remain in the wild today, and every year poachers kill at least 20,000. The illegal ivory trade has links to organized crime syndicates that threaten local communities and promote corruption. And while the ivory for sale in shops such as this one, just off Des Voeux Road in central Hong Kong, may be legally sourced from existing government-controlled stockpiles, most of the new ivory for sale in the world is not.

Selling elephant ivory is banned in a number of countries, including the United States. And a ban is coming to Hong Kong. A 2015 report by WWF revealed that legal trade could be used as a front for laundering illegal ivory sourced from freshly poached elephants. Following vigorous public campaigns, in January 2018 Hong Kong’s lawmakers voted to ban the trade, phasing it out by 2021. But in Japan and other parts of Asia, it’s still legal.

Mainland China is the notable exception. The country, whose citizens generate most of the global demand for elephant ivory, outlawed the practice, with a ban on the sale of ivory taking effect on December 31, 2017. Conservationists celebrated the move as a milestone for curbing the illegal trade.

But despite the ban, Chinese demand persists. In the elephant ivory markets that remain open (either legally or due to lack of enforcement) in Asia—notably in Laos, Myanmar, Thailand, and Vietnam—over 90% of the customers are estimated to hail from China. These ivory seekers can no longer legally purchase the goods they desire in their home country, but supplies are readily available just across national borders. And even though it is illegal to do so without a permit, carrying small amounts of ivory back home to China isn’t perceived as a risk.

Making the Chinese ban a real turning point in the elephant poaching crisis means closing the remaining markets in Asia and stamping out consumer demand, says Cheryl Lo, wildlife crime manager for WWF-Hong Kong. So as WWF continues to work with other governments in the region to ban ivory sales, they are also focusing intently on the root of the problem: demand.

In a bid to successfully reduce elephant ivory demand, WWF is taking a new approach to ivory consumers. Past efforts have focused on raising awareness of the problem, urging people and companies not to buy or sell elephant ivory, and making people aware of the Chinese ban. WWF now wants to go deeper: to get inside the heads of consumers to figure out what drives their desire to buy ivory.

“The approach is refreshing because the key challenge is that we often don’t understand consumers and why they purchase ivory or other illegal wildlife trade products,” says Naomi Doak, head of conservation programs at The Royal Foundation, which leads United For Wildlife, a collaboration of seven nonprofits—including WWF—that aims to end illegal wildlife trade. “We have to address demand if we are ever going to truly tackle the poaching of elephants for ivory.”

In 2016, WWF teamed up with a psychosocial researcher to produce a guide to understanding and undermining the cultural and social roots of consumer desire for ivory. In 2017, WWF partnered with wildlife trade monitoring network TRAFFIC and consumer research firm GlobeScan to study the ivory consumption patterns of more than 2,000 people across 15 Chinese cities.

“It’s a very new space, this demand reduction work based on consumer analysis and research,” says Jan Vertefeuille, who is leading the initiative for WWF-US. WWF is wading into social marketing and behavioral change research, employing tactics usually used by large marketing companies. The model has been adopted successfully by the public health sector to tackle issues like reducing smoking, but it has only recently been applied to illegal wildlife consumption. The team has even commissioned the first “social listening” analysis about elephant ivory done for WWF, from a Chinese firm that tracks trends and buzz across public social media platforms.

Among the consumer findings that are helping shape WWF’s outreach: The people most opposed to buying elephant ivory were often men between the ages of 51 and 60, with lower-than-average incomes, living in large cities such as Beijing and Shanghai. In contrast, diehard buyers—those who had previously purchased ivory and who were likely to continue doing so despite the ban—were more likely to be females with medium-to-high incomes who lived in smaller Chinese cities.

The study showed that elephant ivory attracts these women for a number of reasons: It is rare and beautiful, it carries cultural significance, it makes a good gift. There were other drivers as well. “Ivory is a status symbol,” says Lo, referring to the product that people sometimes call “white gold.” It’s a luxury product that people use to flaunt their wealth, she explains.

This is played out in Hong Kong’s shops, where more than 300 traders hold licenses allowing them to sell ivory goods legally. All Hong Kong stores visited during the study were located on or close to busy shopping streets. Some were set up like expensive jewelry shops with ivory items carefully displayed, while others were run like sundry shops with goods crammed onto shelves. But all the shops had one thing in common: steep prices.

It’s because of this that China’s rising middle class began to look to elephant ivory as a good place to park their money a decade or so ago, says Vertefeuille. “Ivory never goes bad, right? So it’s something you can invest in long term, something that can be seen as a smart way to spend your money, and something you can show off too,” she explains. “It’s a collector’s mentality, like high-end art.” 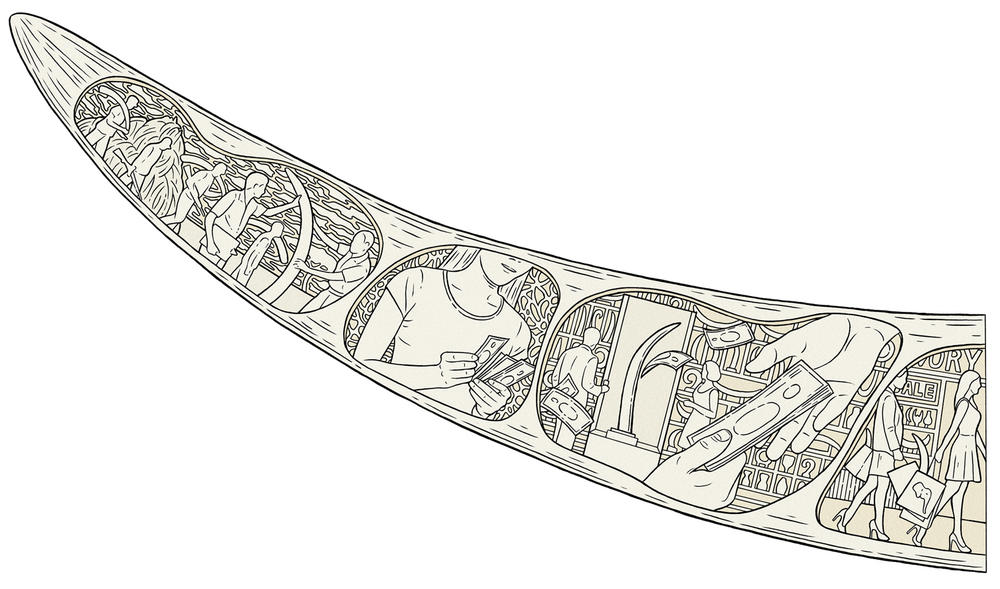 People also have been known to use ivory to bribe government officials, because it is rarer than money or gold. Some seek out elephant ivory products for spiritual reasons, believing a bangle or pendant can protect its wearer from harm or bad luck. “Elephants are the biggest mammals on Earth, and some people think, ‘If I wear ivory, the biggest animals will protect me,’” says Xu Ling, head of WWF-China’s wildlife trade program.

With the study clarifying what motivates people to buy elephant ivory, WWF can craft messages to reach them in an effective manner. “For millennials and female buyers, for example, emphasizing the ‘elephant welfare’ aspect seems to hit home,” says Caroline Prince, a WWF wildlife conservation program officer who worked on the study.

Megan Hill, an environment protection specialist with the US Agency for International Development, calls WWF’s research groundbreaking. “NGOs don’t often put in the time, money, and resources toward consumer research and marketing; but if you think about the marketing budgets of big consumer companies, they spend millions on it,” she says. “If we want to change people’s consumption habits, we have to do the same thing.”

IS ANY IVORY OK?

The term “ivory” can be used to refer to the tusks and teeth of a number of species, from elephants to warthogs, hippos, and whales. Each species has specific legal guidelines governing the sale of their ivory. Walrus ivory, for example, may be sold in Alaska, but cannot be imported from abroad. Alaska Natives are permitted to honor the traditional and sustainable practice of hunting walrus for ivory, food, and other cultural purposes.

A key demographic on which WWF is focusing its demand reduction efforts is Chinese international travelers, especially those going to Southeast Asia.

“Our research found that the most likely purchasers of ivory are outbound travelers, millennials, and people from interior Layer 3 cities—the American equivalent of the Midwest,” says Prince. “The top destinations of these travelers overlap with places with large ivory markets, such as Hong Kong, Thailand, and Vietnam.”

“Ideally, we want to reach out to people before they leave on their travels,” notes Vertefeuille. To do so, WWF is working with Chinese customs officials, the World Travel & Tourism Council, and popular online travel agencies such as Ctrip and Qyer to raise awareness and discourage overseas buying of illegal wildlife products, including elephant ivory. WWF also conducts workshops to educate tour guides on responsible tourism and is launching a campaign to reach travelers during China’s October Golden Week, when as many as 6 million people venture overseas.

With a focus on Chinese travelers to Thailand, where elephant ivory is still openly for sale, the campaign will work with popular travel and fashion influencers, such as web celebrities, who will help share the message that ivory is no longer fashionable or a good holiday souvenir.

Noting that millennials—a group that prefers to receive its messages digitally—make up a large proportion of elephant ivory consumers, WWF is working to clamp down on the online presence of illegal ivory advertising and sales, and to educate users on the elephant poaching crisis. WWF’s partners in the effort include social media channels; e-commerce giants Alibaba, Baidu, and Tencent; TRAFFIC and the International Fund for Animal Welfare, as part of the Wildlife Trafficking Online.

“We’re taking a mixed-intervention approach to tackling the issue,” says Vertefeuille. “One message may not affect someone, but if they hear multiple different reasons to give up ivory, maybe the third message will resonate. So cumulatively, they work.”

Promisingly, Xu Ling of WWF-China says that in addition to the closing of the country’s legal ivory market, the illegal ivory trade also appears to be shrinking since the ban took effect. “We’ve been doing constant market monitoring, and we’ve noticed that the volume and prices of ivory products have decreased,” she says.

At the end of the day, Xu Ling thinks we’re on the cusp of change, and that, one day, elephant ivory shops like those off Des Voeux Road in Hong Kong will cease to exist. It’s a scenario that holds important implications beyond saving Africa’s elephants.

“If the ivory trade ban can result in elephant conservation, it will be a good model for other species such as tigers and pangolins,” Xu Ling says. “We can then repeat this success for other endangered wildlife.”