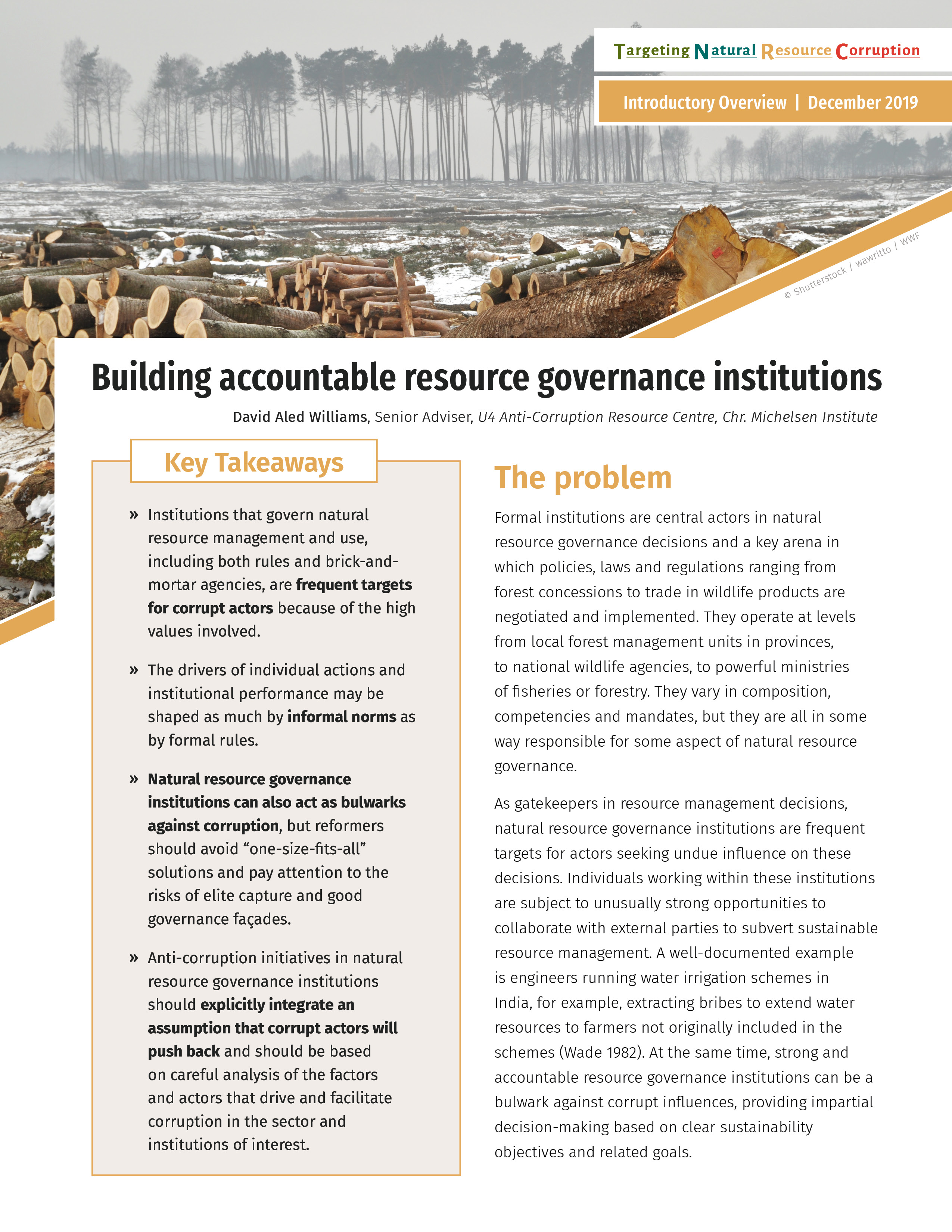 Formal institutions are central actors in natural resource governance decisions and a key arena in which policies, laws and regulations ranging from forest concessions to trade in wildlife products are negotiated and implemented. They operate at levels from local forest management units in provinces, to national wildlife agencies, to powerful ministries of fisheries or forestry. They vary in composition, competencies and mandates, but they are all in some way responsible for some aspect of natural resource governance.

As gatekeepers in resource management decisions, natural resource governance institutions are frequent targets for actors seeking undue influence on these decisions. Individuals working within these institutions are subject to unusually strong opportunities to collaborate with external parties to subvert sustainable resource management. A well-documented example is engineers running water irrigation schemes in India, for example, extracting bribes to extend water resources to farmers not originally included in the schemes (Wade 1982). At the same time, strong and accountable resource governance institutions can be a bulwark against corrupt influences, providing impartial decision-making based on clear sustainability objectives and related goals.

However, the success of anti-corruption or integrity efforts is largely dependent on how appropriate they are to the specific context (Williams and Le Billon 2017). Therefore, getting to know individual resource governance institutions – how they work, the personalities involved, the pressures they are under, where their revenues come from – is a critical first step towards minimizing corrupt influences and unlocking their anti-corruption potential.

Corruption in its various guises - including nepotism, bribery, collusion, kickbacks, patronage and rent-seeking - is widely viewed as a threat to the goals that formal institutions are established to achieve. Anti-corruption or integrity initiatives focus on strengthening formal institutions to make them more resistant to corrupt behaviors and influence so that they are better able to achieve their goals. These efforts tend to assume that the leadership of an institution is invested in the institution’s formal goals and that leaders will act against corruption in order to protect those goals (Marquette and Pfeiffer 2018). While this may be the case in many instances, experience also demonstrates that the functions of formal institutions can be disabled through corrupt actors, including leaders, and corrupt actions. We refer to such situations as elite capture.

“One-size-fits-all” solutions for making natural resource governance institutions more accountable are likely to fail because the functioning of every institution is conditioned by contextual factors. Reforms will face significantly different challenges depending on whether the institution is found in a broadly democratic system in a peaceful society or in authoritarian or conflict-affected governance settings, for example. Furthermore, in either setting, the basic incentives driving behaviors within formal institutions may be governed more by informal norms than by formal rules (Jackson and Kobis 2018). Those seeking to promote integrity and anti-corruption reforms should be particularly aware of the potential for gaps between formal policies or declarations of intent and institutions’ actual practices and performance. In some cases, institutions may erect “good governance façades” primarily to placate external actors rather than to enable substantive reforms (Moene and Søreide 2015).

In practice, different types of corruption affect the goals of natural resource governance institutions in a number of ways. Typical examples include:

Worsening these impacts is the fact that revenues from natural resources also can provide politicians and officials with the means to control opposition or otherwise discourage democratic institutions and processes that are crucial for countering corruption. This is particularly the case in situations where democracy and civic space are absent at the time of resource discovery (Williams and Le Billon 2017). For example, an econometric study covering 124 countries over the period 1980-2004 found that the presence of natural resources (including oil, minerals and forests) increased corruption in countries with the least strong democratic institutions (Bhattacharyya 2010).

To challenge such behaviors and avert worst-case outcomes, a number of approaches are possible:

Broadening the range of stakeholders scrutinizing resource-use information
A common approach is to make publicly available natural resource use data that was previously controlled by a particular gatekeeper institution. The aim of this type of effort is to allow a broader range of actors – including civil society, development partners, and the private sector – to scrutinize the data and to flag abuses, including those that may involve the natural resource governance institution itself. Recent examples include the Fisheries Transparency Initiative (FiTI), Indonesia’s One Map Policy and the extension of the Extractive Industries Transparency Initiative (EITI) to the timber sector in Myanmar.

Procedural reforms
Within institutions, anti-corruption efforts might focus on procedural reforms to strengthen financial management and monitoring, streamline procedures for granting licenses and concessions to reduce opportunities for bribery or extortion, and/or improve hiring and staff accountability practices, among others. These can be important steps to reduce abuses, but such efforts should explicitly consider that corrupt actors will attempt to push back against particular reforms or enforcement actions.

Analysis of the drivers and incentives behind corruption
Analyzing the drivers and incentives behind corruption in a particular sector or institution is crucial for designing responses that are effective and won’t cause further harm. For example, reporting mechanisms to allow informants to blow the whistle on environmental crimes and bypass compromised formal management authorities must assure that information is safeguarded and the rights of informants and the accused are protected. If the actors involved and their driving incentives are not clearly understood, however, a mechanism like this might cause more harm than good.