A Ban on Commercial Elephant Ivory Trade in China: A Feasibility Study Briefing

WWF and TRAFFIC believe that an elephant ivory trade ban in China is feasible and could be effective in contributing to a reduction in current threats to African elephants. Such an ambitious and achievable act could garner positive exposure for China's responsible action on a critical wildlife conservation issue and become a positive influence on other countries' efforts to tackle the illicit elephant ivory trade. 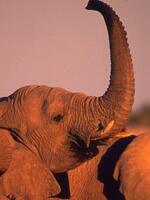