Driven to Waste: The Global Impact of Food Loss and Waste on Farms

The report focuses on food losses on farms, around and during harvests and slaughter as well as after. This is the first quantification of total on-farm food loss since 2011. When combined with updated data on loss in supply chains and waste at retail and consumption, we have a clearer picture of the scale of food loss and waste from farm to fork demonstrating how important it is to halve food loss and waste through the whole supply chain, not just in retail and consumption. 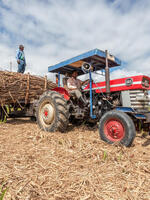