The Living Planet Report documents the state of the planet—including biodiversity, ecosystems, and demand for natural resources—and what it means for humans and wildlife. Published by WWF every two years, the report brings together a variety of research to provide a comprehensive view of the health of the Earth.

The report also tracks the state of global biodiversity by measuring the population abundance of thousands of vertebrate species around the world. The latest index shows an overall decline of 60% in population sizes between 1970 and 2014. Species population declines are especially pronounced in the tropics, with South and Central America suffering the most dramatic decline, an 89% loss compared to 1970. Freshwater species numbers have also declined dramatically, with the Freshwater Index showing an 83% decline since 1970. But measuring biodiversity—all the varieties of life that can be found on Earth and their relationships to each other—is complex, so this report also explores three other indicators measuring changes in species distribution, extinction risk and changes in community composition. All these paint the same picture—showing severe declines or changes. 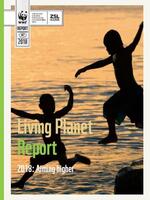