A soul-sucking ‘dementor’ wasp, a bat with long fangs, a stealthy wolf snake, a color-changing thorny frog, and the world’s second longest insect are among the 139 new species discovered by scientists in the Greater Mekong region in 2014, according to a new report released by WWF.

Ninety plants, 23 reptiles, 16 amphibians, nine fish, and one mammal are detailed in the report Magical Mekong—and many of them are already at risk. They include a feathered coral whose nearest relatives live in Africa, four moths named after Thai princesses, a color-changing thorny frog and two orchids discovered already being traded. This brings the total number of new species discovered in the Greater Mekong—a region that includes Cambodia, Laos, Myanmar, Thailand and Vietnam—to 2,216 between 1997 and 2014. That’s an average of three new species discovered a week. 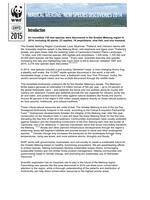