Wild Mekong: New species in 2010 from the forests, wetlands and waters of the Greater Mekong, Asia’s land of rivers

A new monkey, a self-cloning skink, five carnivorous plants, and a unique leaf warbler are among the 208 species newly described by science in the Greater Mekong region during 2010. The region is an integral part of one of the top five most threatened biodiversity hotspots in the world. 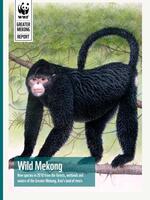