A healthy environment as a human right in Coastal East Africa 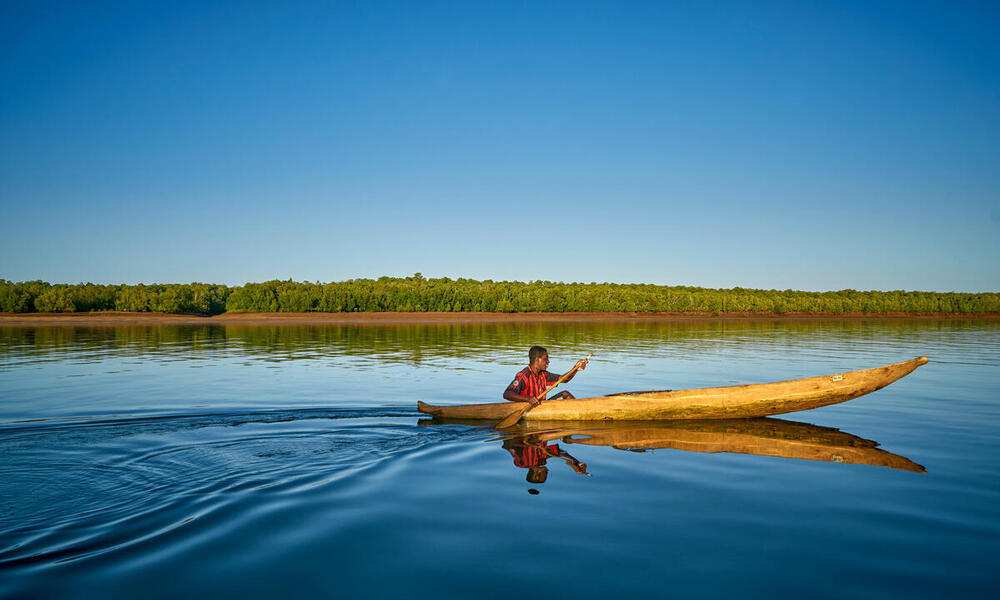 In October 2021, the United Nations Human Rights Council recognized that having a clean, healthy, and sustainable environment is a human right. So what does this mean in practice - especially in places where economies, food security, and cultural identiy are interwoven with the ecoystems they depend on?

For the 12.3 million people employed in African fisheries and aquaculture—and whose work feeds millions more—it means they have greater standing to demand economic, social, and environmental policies that uphold their rights.

Coastal rights continue to be challenged by competing uses and increasing users. Similar to a “land grab”, wide-scale “ocean grabbing” is growing, as previously public or community-held ocean spaces and resources are reallocated, enclosed, and privatized. On the African coast, distant water fleets are already overfishing African waters—hurting small-scale fishers and exploiting the limited domestic or regional capacity to monitor the activities of these trawlers and enforce the law. Other industrial projects such as port development and oil and gas infrastructure have led to the displacement of fishing communities.

If policymakers commit to the right to a healthy environment as a policy goal, they would prioritize protection and restoration of the coastal ecosystems that underpin economic development and food security for these communities. Fulfillment of that one right could kick-off a beneficial cycle of prosperity, resilience, and opportunity. But it won’t happen by accident; targeted policies and investments are needed to ensure rights are secured and resilient economic development goes hand-in-hand with coastal protection.

Across the coastal east Africa region, governance frameworks vary from one country to the next, but common to every country is the recognition of a co-management approach to deliver rights of small-scale fishers. As the name suggests, it involves sharing the responsibility and authority between governments and communities.

While co-management has been customary of many coastal communities for thousands of years and a living example of participatory democracy, policies are only now being adopted nationally. In Madagascar for example, the fisheries department adopted regulations in 2017 that empowers communities to manage coastal resources. Compared to a top-down approach, co-management relies on transparency and trust, merging science and traditional knowledge. This can be a challenge to achieve, but it rewards the additional effort with benefits for both people and nature.

WWF is proud to have supported coastal communities in securing their rights to resources and improving their management of those resources. Communities in Tanzania, Kenya, Madagascar and Mozambique temporarily closed fisheries of octopus, a fast growing species. After the pause, which allowed the octopus to mature and reproduce, the communities saw massive increases in their catch and revenue during reef openings. This year, a fishery in Tanzania was able to sell its harvest for a 100-fold profit on previous years. “This is my first time ever to get a lot of money from fishing activities since I started fishing in 2019,” said one fisher.

In addition to sustainable fishing, a co-management approach can be applied to other economic activities like aquaculture and seaweed farming, as well as conservation and blue-carbon capture projects like protecting coral reefs, mangroves and seagrass. Coupled with microfinance tools, financial literacy and access to finance, such projects can help reduce communities’ dependency on dwindling inshore fisheries.

But there’s no one-size-fits-all solution. Networks of coastal community-led organizations, nonprofits and governments need to come together to implement transformative approaches that will deliver large-scale, rights-based outcomes for both Africa’s people and the coastal ecosystems that support them.

The threat of ocean grabbing is real and imminent. It carries the risk of greater inequity, unfairness and exploitation of resources hidden under the guise of development. That threat must be met with a non-negotiable commitment to human rights -- including the newly enshrined right to a clean, healthy and sustainable environment.

WWF aims to help make that case until this right is a reality.