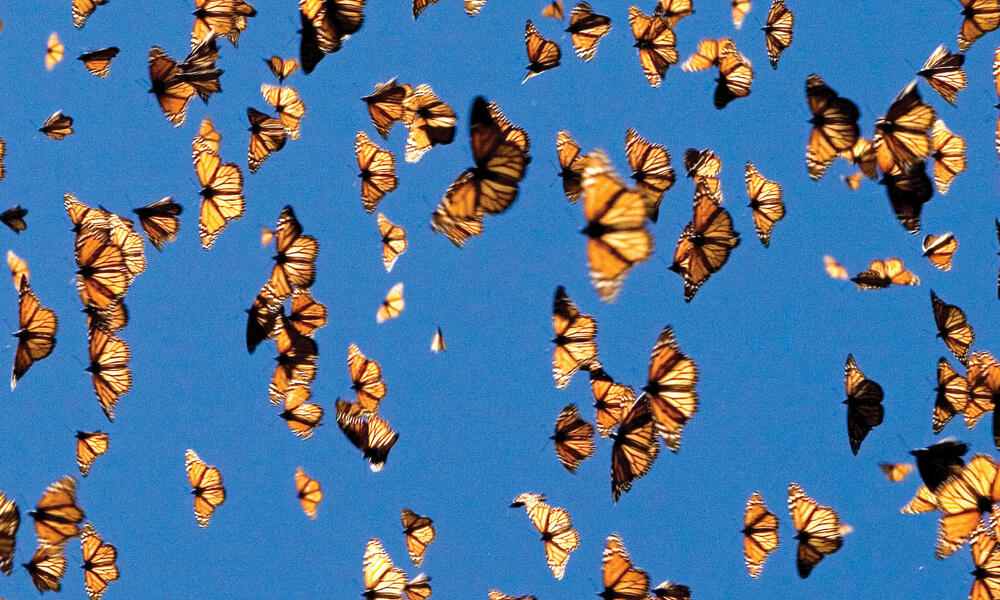 The presence of monarch butterflies in Mexico’s forests this past winter was 35% greater than the previous year, according to the most recent survey led by WWF Mexico. This increase marks a sign of recovery—albeit a fragile one—and gives some reason for hope against a backdrop of several decades of decline for the iconic species.

According to the survey, Forest Area Occupied by the Colonies of Monarch Butterflies in Mexico During the 2021-2022 Overwintering Season, the species’ presence in and around Mexico’s famed Monarch Butterfly Biosphere Reserve grew from 5.19 acres in December 2020 to 7.02 acres in December 2021. Because it is impossible to count each butterfly, the survey measures the area of forest the monarchs occupy each winter in the hibernation colonies, inside and outside the Reserve, providing an indicator of their population status.

"The increase in monarch butterflies is good news and indicates that we should continue working to maintain and reinforce conservation measures by Mexico, the United States, and Canada," said Jorge Rickards, general manager of WWF-Mexico. "Monarchs are important pollinators, and their migratory journey helps promote greater diversity of flowering plants, which benefits other species in natural ecosystems and contributes to the production of food for human consumption."

While the eastern population of the monarch butterfly has fluctuated from year to year, its steady decline is worrisome. In the winter of 1995-96, overwintering monarchs covered nearly 45 acres of forest in Mexico. Since then, scientists have documented a general downward trend.

The main causes of this decline include:

To protect the monarch butterfly overwintering grounds in Mexico’s Monarch Butterfly Biosphere Reserve, WWF works with the Mexican government, local communities, and other partners to promote scientific monitoring, sustainable forest management, education on the monarch butterfly migration, sustainable tourism, and establish alternative income-generating ventures. Among those projects are family-managed mushroom production modules, and the community-based tree nurseries that help restore the forest in the reserve and create new sources of income for the local communities that live in the region

Since 2003, WWF-Mexico has led the monarch butterfly surveys in coordination with local communities and the collaboration of the National Commission of Protected Natural Areas of Mexico, the Mexican Autonomous National University, and the WWF Alliance-Telmex Telcel Foundation.