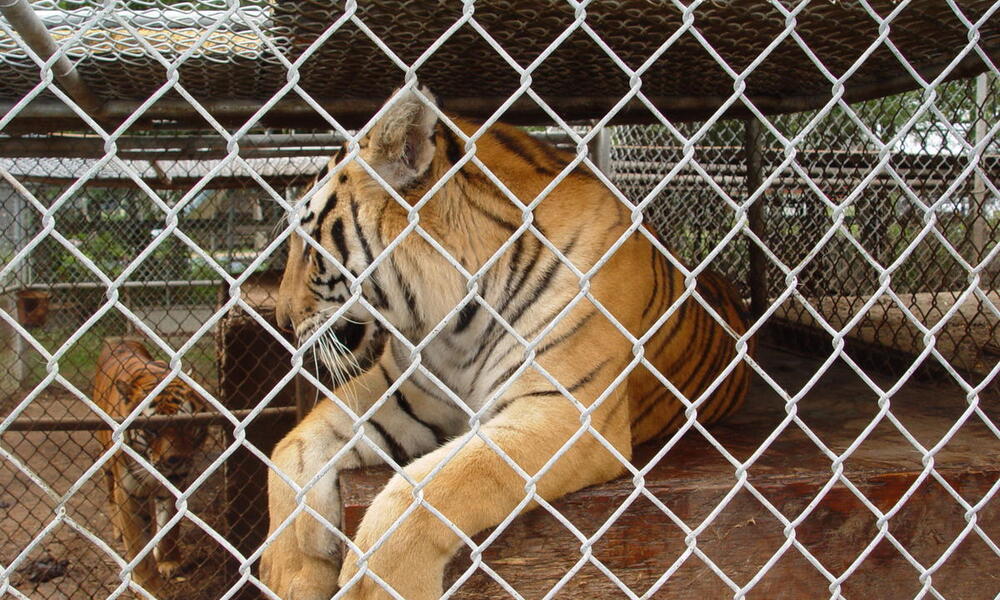 With around 5,000 captive tigers in the US, we must ensure laws are in place to prevent these animals from ending up in the illegal trade in tiger parts and products that remains a primary threat to wild tigers.

WWF considers the illegal trade of tigers to be the greatest immediate threat to the conservation and survival of this animal. With fewer than 4,000 tigers in the wild, demand for tigers and their parts is pushing these animals closer to extinction. While wild tigers are found in just 13 Asian countries, the illegal wildlife trade of parts and products from captive tigers comes from all corners of the globe.

New findings show that weak legislation and regulations on captive tiger facilities across the European Union and the United Kingdom are helping to fuel this illegal trade. Despite protection of tigers under the Convention on International Trade in Endangered Species of Wild Fauna and Flora (CITES), the EU and UK continue to trade in live captive bred tigers and tiger products with countries where tiger farms are known to feed the illegal tiger trade, such as China, Thailand, and Viet Nam.

There were a total of 111 direct exports of tigers from the EU between 2013 and 2017, 103 of which were live tigers, and a total of 165 EU tiger re-exports, 84 of which were live tigers. The data is part of a new joint report by WWF and TRAFFIC that investigates the domestic legislation, policies, and related enforcement regarding the keeping, breeding, and disposal of tigers and their parts in the EU.

The report, Falling through the system: The role of the European Union captive tiger population in the trade of tigers, found weak regulations, compliance checks, and no comprehensive system for monitoring captive tigers across the EU and UK. Inspections of facilities are infrequent, and the procedures to dispose of tigers after they die are weakly legislated without comprehensive government oversight. In many countries, private individuals and/or circuses can still keep tigers. Loopholes exist and must be addressed at the national and EU-level to ensure tigers and their parts do not enter the illegal wildlife trade.

A tiger crisis closer to home

There are at minimum 850 tigers across the EU and the UK, according to animal welfare organization Four Paws. However, the US captive tiger population is somewhere around 5,000. A staggering sum that outnumbers tigers in the wild. These US numbers are largely attributed to privately owned facilities like roadside attractions or tigers being kept as pets. Only a small percentage are maintained in zoos accredited by the Association of Zoos & Aquariums (AZA) or other facilities where welfare and conservation are prioritized. The US—like the EU and UK—currently has a patchwork of laws in place to regulate the ownership and trade of tigers.

The US lacks a central accountable agency to identify tigers held by private owners and cannot say where they all are, when they are sold or traded, or what happens to their parts when they die. Inconsistent regulation and prevalent loopholes plague the handling of tigers in the US and could easily allow them to slip into the illegal global wildlife trade.

With the current regulation of tigers in the US, it is incredibly difficult to track and monitor these animals. In order to rectify the current inadequate legislation, WWF supports passage of the Big Cat Public Safety Act (BCPSA) to require federal permits for all tigers in the US.

A call for action

Today, the US has the chance to be a leader in global tiger conservation. To do so, we must manage these conservation threats in our own backyard if we are to be successful when calling on other governments to follow suit. US leadership demonstrating tight controls on captive tigers can set a strong standard that cracks down on the illegal tiger trade. Otherwise, captive tigers will continue to feed the illegal tiger trade and threaten wild tiger conservation. Once passed, the BCPSA would help the world take one step closer to securing a future for wild tigers.