Sleek gray bodies glide through the water, hunting down small silvery fish. They zip down the river, following their prey, until they hear an unusual pinging sound that makes them stop just before swimming directly into an open fishing net.

River dolphins in the Mahakam river have been at risk for many years in large part from getting accidentally caught in fishing nets. This is called bycatch. Over the last 25 years, two-thirds of river dolphins deaths in the Mahakam river were due to entanglements; only 80 dolphins are left in the surviving population. This is a common story in other major rivers as well, such as the Indus, Ganges, Irrawaddy, and Mekong.

In an effort to protect these animals from potentially fatal entanglements, and to benefit local fishers, an innovative project in Indonesia shows that attaching electronic devices, or “pingers”, that emit sounds to fishing nets help deter river dolphins from swimming too close to the nets. 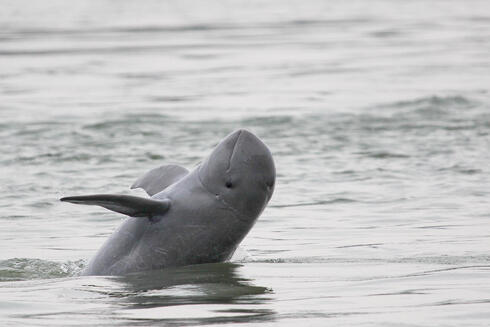 During the six-month study monitoring the effectiveness of these pingers, there was a 100% reduction in dolphin by-catch, saving the lives of dolphins and avoiding costly damage to fishers’ nets. Additionally, when pingers were deployed, dolphins remained about 10 feet away from the nets and thus away from the fish that would be caught by them, which resulted in increased average daily catch for fishers by over 40% (an additional 350 - 500 lbs of fish).

This is a major win for river dolphins and for freshwater ecosystems, and has the potential to be scaled in other rivers around the world. Dolphins are a critically important keystone species, meaning that a healthy population of river dolphins indicates a healthy and functioning river ecosystem at large. As predators, dolphins help maintain fish populations in the river. When we see dolphin populations thriving, we know that fish populations are doing well, too. Additionally, they can give us insight on the health and quality of the river; for example, the development of a hydropower dam changes the normal water flow and depth of a river, which can interrupt fish and dolphin migration patterns and change a stretch of river to be uninhabitable for them. By protecting dolphins with innovative tools such as the pingers, we are helping to maintain balance within their ecosystem.

Today the river dolphins in Mahakam can swim more freely thanks to the pingers, but there are still other threats facing dolphins that put them at risk for extinction. In order to support our rivers, it is critical that we address all major threats to river dolphins – unsustainable fisheries, hydropower and infrastructure, and pollution.

Learn more about river dolphins and what you can do to help.