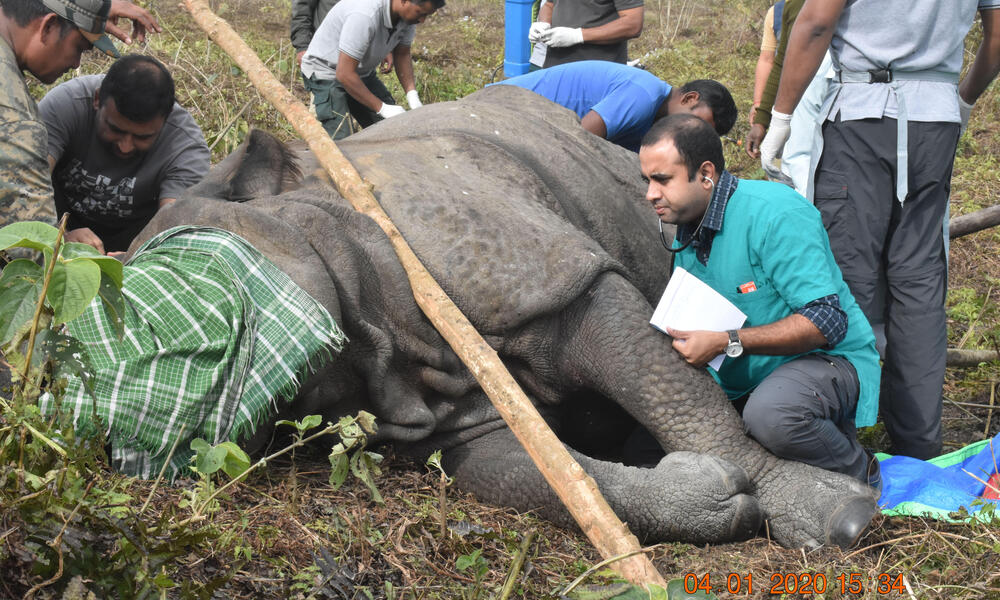 Floods resulting from monsoon rains are an annual occurrence in Assam, India, impacting millions of people and animals. This year, the flood affected 3.4 million people, and thousands of wild animals. Dr. Parikshit Kakati, WWF India’s wildlife veterinary specialist, played a key role during the flood as part of a team that rescued and treated injured wild animals.

I attended the College of Veterinary Science, Assam Agricultural University in 2006, followed by graduate school in 2013. I was curious about different disease-causing pathogens and parasites, so I chose to specialize in Veterinary Parasitology and conducted my research on blood parasites in bovines. From 2014 to 2017, I was involved in a project funded by the Department of Biotechnology, Ministry of Science and Technology, Government of India as a Senior Research Fellow, screening the entire northeast India for different livestock and wildlife diseases.

How long have you been working with WWF, and what is your role?
I was pursuing my Ph.D. in Veterinary Parasitology when the position of Senior Program Officer-Veterinary at WWF-India was offered to me. I didn’t give it a second thought and jumped at the offer, joining the organization in 2017 and becoming part of the Brahmaputra Landscape team at WWF-India. My primary role includes assisting in rhino translocation, direct veterinary intervention for disease investigation and treatment and prevention of disease transmission from domestic livestock to the rhino population.

We also carry out annual pre-monsoon livestock vaccinations in villages surrounding protected areas in collaboration with the Forest Department, Veterinary Department and other conservation organisations. We have helped vaccinate around 15,000 animals against bacterial diseases like haemorrhagic septicaemia, black quarter, and viral infections like foot and mouth disease. To prevent the transmission of such infectious diseases to wild animals, a combined vaccine that covers all the three diseases provides protection to the livestock for about a year.

You have been working relentlessly during the floods in the vet camp. Please tell us about it.
Every year, due to the annual flood in the northern portion of Kaziranga National Park and Biswanath Wildlife Division, located north of the Brahmaputra River, numerous wildlife species like barking deer, hog deer, swamp deer, hog badgers, porcupines, different species of reptiles, civets, and birds are impacted by the rising water level. In some cases, stranded wild animals need to be rescued from the villages as they often try to move from the national park and to higher ground for safety, which often takes them to nearby villages.

Rescues are usually done by the staff of Biswanath Wildlife Division and Sonitpur East Division. However, this year WWF initiated and assisted with the first flood rescue camp on the northern side of the Brahmaputra River. Other conservation NGOs like Wildlife Trust India, Assam Wildlife Rescue and Rehabilitation Organization and others, as well as local volunteers and veterinarians from the State Animal Husbandry Department and the Assam government, worked tirelessly around the clock treating rescued wildlife. Depending on the severity of the case, we worked to release the animals back to the wild once we were assured that the individual is healthy enough to take care of itself.

WWF-India also works with local communities during the flood season by organizing interactive wildlife rescue workshops. We provide villagers with information on when it is safe to perform animal rescues, how to care for displaced animals, and who to contact when they find wildlife in distress. Additionally, villagers received information on snake bites, dog bites, and why communities should not release their pet dogs during floods. Dog bite cases involving deer and feral or pet dogs increase during flood season and often result in wildlife casualties so we want to bring attention to this issue. These programs help build community connections with and empathy towards wild animals in distress and, therefore, help prevent crimes like poaching and hunting. 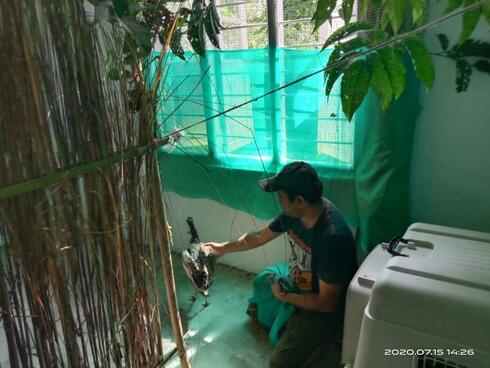 How many animals were rescued, treated, and released this year?

There were two wildlife rescue and treatment camps in this part of the park this year and veterinarians and local volunteers worked around the clock to rescue and rehabilitate displaced animals. Approximately 35 animals were treated, including hog deer, and a variety of birds and snakes. Twenty-seven animals have already been released back to the wild, while five, unfortunately, succumbed to their injuries.

A highlight for me this year was the opportunity to treat a very rare avian species called the Bengal florican. Less than 1,000 of these birds remain in the wild and they are critically endangered. When all of the florican ranging-areas in the park flooded, this bird was at risk of not making it to safer or higher ground in time. The bird was brought to our vet camp and I cared for this magnificent species for three days before he was set free. It was the first time that this species was rescued in this part of the park and the staff did a great job of immediately finding and bringing the bird under our care. Every single adult florican male is important for this species and we hope that he will continue to propagate his genes for future generations.

What are some of the challenges that you face?
In protected areas, running wildlife rescue and treatment camps during floods areas is especially challenging. The availability of rescue vehicles and staff during emergencies are just some of the major challenges. There is neither a fixed time for animal rescue operations nor a set time to eat and rest. It’s easy to lose track of the day but the exhaustion is forgotten when you see the rescued animals recover and return to the wild.

What keeps you motivated during these difficult times?
Rehabilitation of rescued animals motivates me. Each species has different treatment requirements and challenges and, therefore, each rescue is a new learning experience and an opportunity to try new treatments. Seeing my efforts bear fruit and the animals finally released back to the wild is the ultimate satisfaction for me.