The Marianas Trench is the deepest trench in the world, at 11,034 meters (36,201 feet) deep. If placed in the trench, Mount Everest’s peak would still come up 2,000 meters short of reaching the ocean’s surface. Though the Marianas Trench was established as a Marine National Monument, plastic pollution has managed to find its way to the bottom of the trench, where explorers have found it littering the ocean floor.

As part of an expedition to the Marianas Trench in 2014, a team of scientists discovered a new species. Located about 6,900 meters below the ocean surface, one particular new specimen of crustacean was alarmingly already polluted with plastic before it was even known to science. As a result, the scientists dubbed the new species Eurythenes plasticus.

With support from WWF in analyzing the newly discovered deep-sea amphipod specimens, scientists found a 0.65mm large microfiber, 80% similar to PET (Polyethylene terephthalate) in one of the individuals. PET is a substance found in a variety of commonly used household items, such as water bottles and workout clothes.

More than 270 species of wildlife have been adversely affected by plastic pollution. About 90% of seabirds are estimated to have plastic in their stomach, and more than 100,000 marine mammals are killed by plastic debris each year. While plastic contamination in animals is not a new occurrence, unfortunately, the presence of plastic pollutants in a newly discovered species, in an area of our planet that we have yet to fully explore, makes this news particularly unsettling. 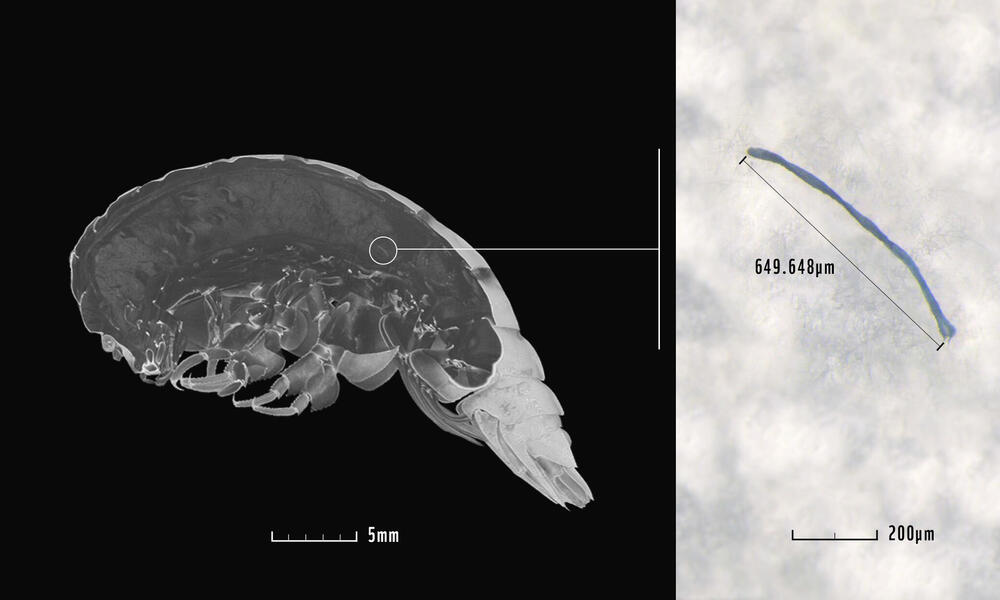 Because the scientists who discovered this new species are concerned with the global plastics crisis and the state of marine ecosystems, in an effort to raise awareness and push for action, they decided that it was fitting to name this newly found creature after the very substance that contaminates it and gives it one of its distinct traits: plastic. Because of this decision, plastics have now officially entered the taxonomic record as a new species.

Dr. Alan Jamieson, head of the research mission, said: “We decided on the name Eurythenes plasticus as we wanted to highlight the fact that we need to take immediate action to stop the deluge of plastic waste into our oceans.”

Because only one specimen was found to contain the plastic contaminant, there is still hope that ending the marine plastic pollution crisis now will keep other individuals of E. plasticus plastics-free; a reminder of plastic pollution in name, only. This is a global problem that requires global solutions. WWF is calling for an international, legally binding treaty to end marine plastic pollution. We are asking supporters to sign our global petition to ask governments of the world to support such a treaty that puts an end to this issue in advance of the 5th UN Environmental Assembly (UNEA) in February 2021, where leaders will be able to adopt a negotiation mandate so that the treaty would be ready to be signed at UNEA-6.

95% of the oceans still remain unexplored. Every day new marine species are discovered. And every minute of every day, at least one truckload of plastic waste is dumped into our oceans - equivalent to 1,440 truckloads each day. Just two days ago, we celebrated World Wildlife Day under the banner of “sustaining all life on Earth”. It is imperative that we continue to fight for sustaining and protecting all life in our oceans and on land from the emergency threat of plastic pollution, so that Eurythenes plasticus be the only “plastic” species in the taxonomic record and the last and only discovery of its kind.