Russell E. Train and the origins of global environmental cooperation 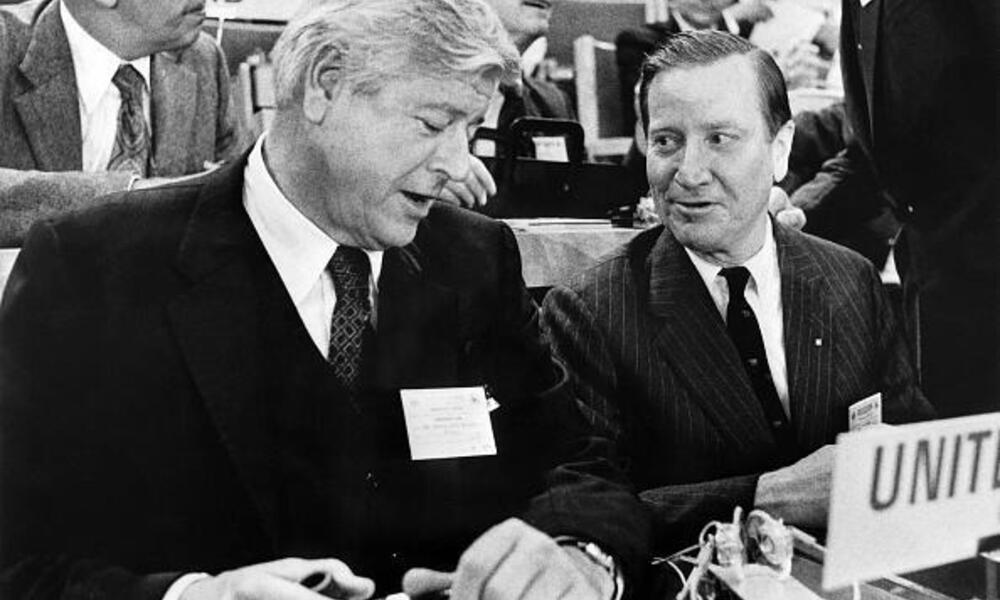 Above: US chairman of the Council on Environmental Quality Russell E. Train (right) and United States Secretary of the Interior Rogers Morton (left) attend the United Nations Conference on the Environment, on June 9, 1972, in Stockholm.

It’s hard to imagine now in 2022, as the news brings weekly—if not daily—updates on global efforts to combat the climate crisis, save endangered species, and rid our air and seas of pollution, that countries might not prioritize environmental protection in international forums and at least try to work together on behalf of the natural world. But in 1972 those ideas were novel.

Individual countries had of course established some stand-alone conservation priorities. But there was no United Nations Environment Programme. No annual conference of parties built around a global climate agreement. And environmental protection was only sporadically prioritized in bilateral meetings between national leaders.

Conservationist Russell E. Train helped change all that. Train was a founding director of WWF-US in 1961 and later served as its president and chairman from 1978 to 1990. As far back as 1965 he, along with others, helped establish the idea for a World Heritage Trust during a White House conference on international cooperation. In 1967, speaking at an International Congress on Nature and Man in Amsterdam, Train described the idea this way:

“I believe it is to be particularly appropriate at this Congress on ‘Nature and Man’ to urge the launching of an international cooperative effort that brings together in a unified program a common concern for both man’s natural heritage and his cultural heritage. In so doing, we will be recognizing that our civilization, past and present, is inextricably linked to our physical environment.”

That notion of merging cultural and natural heritage concerns was among Train’s signature contributions to the environmental movement.

Elsewhere, similar events were conspiring to produce a perfect storm of environmental advancement. In 1968 Sweden’s ambassador to the United Nations, Sverker Åstrom, proposed the idea of a first-ever UN conference focused on the environment. The UN General Assembly approved the proposal and set a place and time: Stockholm, Sweden in June 1972.

By 1972, Train was in a position to turn his World Heritage vision into a reality. In 1970, President Richard Nixon had appointed him as the first chairman of the White House Council on Environmental Quality. And in 1971, in an annual environmental report to Congress, Nixon (with Train’s urging) endorsed the idea of a World Heritage Trust and directed his secretary of the interior and secretary of state to work with the council to develop a plan and present it on the international stage.

As head of the US delegation to what was by then called the United Nations Conference on the Environment, Train carried with him to Stockholm in 1972 a mandate to advance not only the World Heritage concept, but a series of environmental initiatives. According to President Nixon, his objectives for the conference included establishing a new UN unit to “provide continued leadership and coordination of environmental action,” forming a UN fund for the environment, and taking steps to protect whales from commercial hunting, among other items.

Working with colleagues in the US delegation and allies from around the world, Train helped deliver on each of those priorities. The UN Environment Programme was established. A voluntary UN Environment Fund was set up, with a target of raising $100 million. A moratorium on commercial whaling was agreed to. A proposal to regulate ocean dumping was endorsed. And Train’s passion project, the World Heritage Trust, was created. Train introduced the World Heritage proposal himself during remarks delivered at the conference. It was ultimately adopted by the conference. That November, the United Nations Educational, Scientific and Cultural Organization’s general conference adopted the convention and took ownership over its implementation.

The Stockholm conference marked the first global forum focused solely on the environment. It created institutions that have carried forward countless environmental initiatives over the last 50 years. And it was one of several achievements in the early 1970s that helped push environmentalism into the cultural mainstream. In short, it contributed to a global movement that put the protection of our natural world on a policy footing alongside discussions of international trade and security. It’s a movement that continues to evolve to this day to account for new threats and new perspectives – including, critically, greater representation for local communities and Indigenous peoples in conservation planning and decision-making.

In 2002, at an event celebrating the 30th Anniversary of the World Heritage Convention, Train reflected:

As we approach the 50th anniversary of both the convention and the Stockholm conference which produced it, we might take Train’s words to heart. Ours is a world defined by concern for the environment, but also by deep division on seemingly every issue, big and small. The legacy of the World Heritage Convention is that it celebrates the wonders wrought by nature and by human hands. That “common heritage” should serve as a bond too strong for any disagreement to sever, but it's up to us to make it so.