The end of the road for Pebble Mine

How an Alaska Native community in Bristol Bay protected its land, salmon fishery, and culture from a ruinous mining project 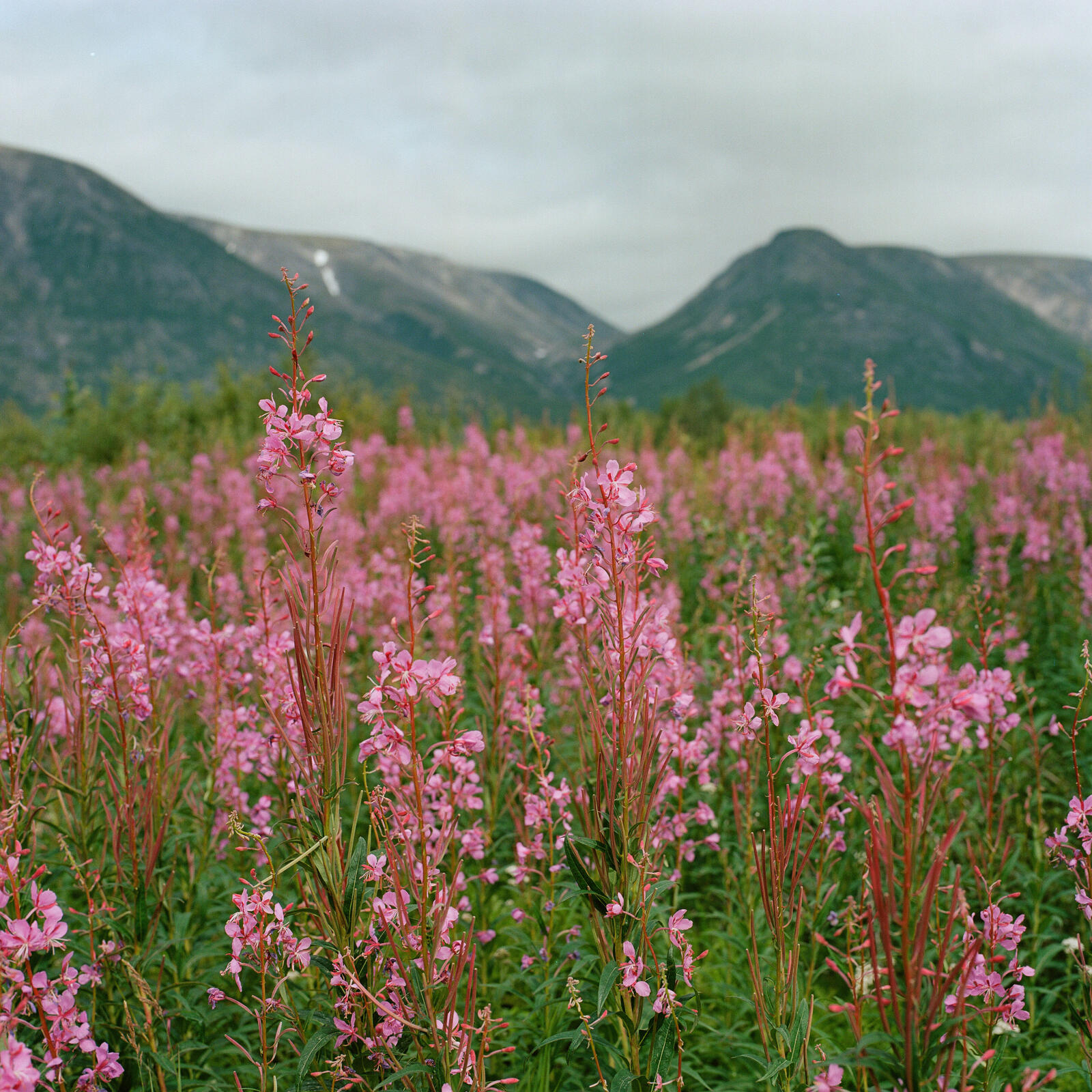 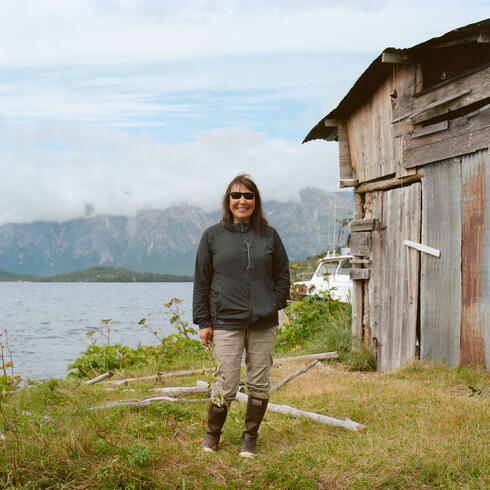 Sarah Thiele stands in a black jacket, smiling, on the sun-soaked hillside where her home overlooks Lake Iliamna in Pedro Bay, Alaska. Fireweed blankets the land around her, tabulating the waning days of late summer with its spires of magenta buds that unfold incrementally from bottom to top. Her three grown daughters—a politico, a writer, and a commercial fisher, all home for the week—banter back and forth as they finish splitting birchwood for their smokehouse on the water’s edge.

Just beyond them, a school of salmon jockeys beneath the surface of the lake, awaiting some unknown moment to muscle up a nearby creek to spawn.

Thiele’s land—her family’s land and her community’s—is pristine. It’s pristine in the peaks of snow-capped mountains, in the narrow waterfalls, in the water so clear that one only needs to peer off the end of a dock to see fish swimming beneath the surface.

And Alaska Natives like Thiele, with support from WWF and other organizations, are trying to keep it that way.

This unspoiled landscape—and the entire Bristol Bay watershed, including the world’s largest wild sockeye salmon run—has for more than a decade contended with the looming threat of Pebble Mine, a proposed copper-gold-molybdenum mining project located in the headwaters of the Kvichak and Nushagak Rivers, two of the eight major rivers that feed Bristol Bay. Developers of the mine have exploited nearly every legal, governmental, and public relations avenue to keep the project alive. Their proposal suffered legal defeat only to crop up again like a prolific invasive plant at the whim of a friendly presidential administration.

But now a historical decision by Native landowners, in conjunction with a landmark proposal by the US Environmental Protection Agency, could finally rip Pebble Mine up from the roots and stop the project for good.

“It's what we want,” Thiele says of the remote, rugged region of southwest Alaska. “It's how we want our lands. When I was a kid, it was just about the same, so for my kids to experience that, and now my grandkids are experiencing that—we just love it like this. We don't want development.” 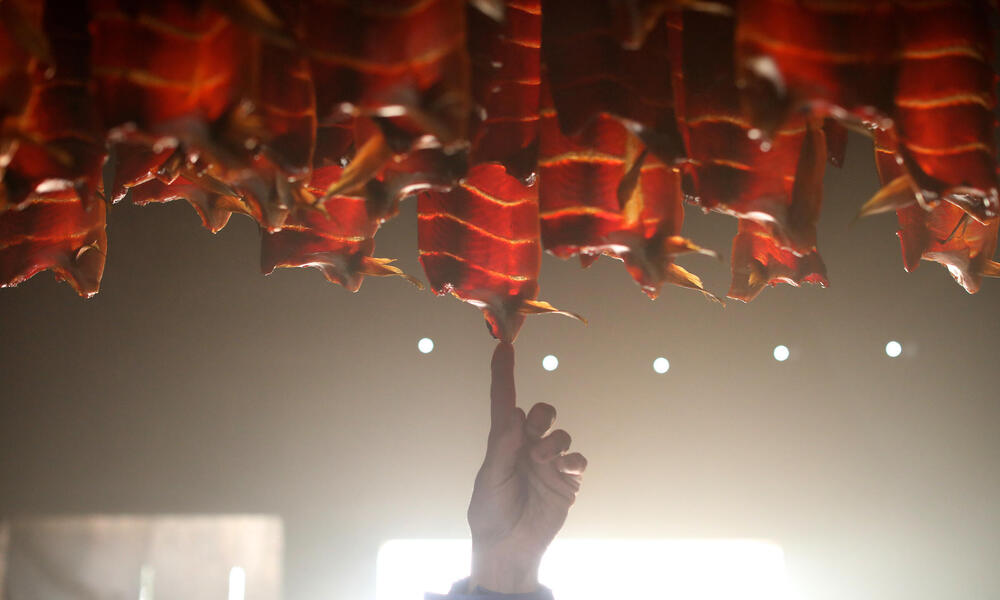 All rivers lead to the sea 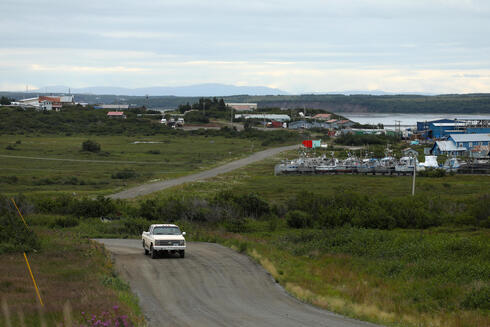 More than 100 miles southwest of Pedro Bay in the small community of Naknek, fishers fill the Red Dog Inn, a local establishment featuring a painting of the namesake red canine holding an overflowing beer stein. Inside, the vibe is jovial. A woman leans over the weathered bar to clang a bell, signaling that a patron has purchased a round of drinks for the crowd. The band, packed tightly in a corner, plays at full volume, yet still competes with spirited chatter and laughter.

The celebratory atmosphere marks the culmination of the Bristol Bay commercial fishing season. And what a season: the sockeye salmon run numbered upward of 70 million and the harvest tallied more than 50 million—both measures shattering records.

The fishery underpins the economy in Bristol Bay, valued at over $2 billion and employing more than 15,000 people. 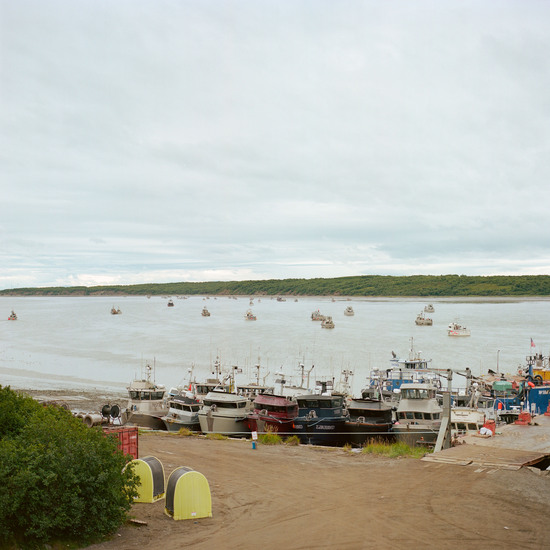 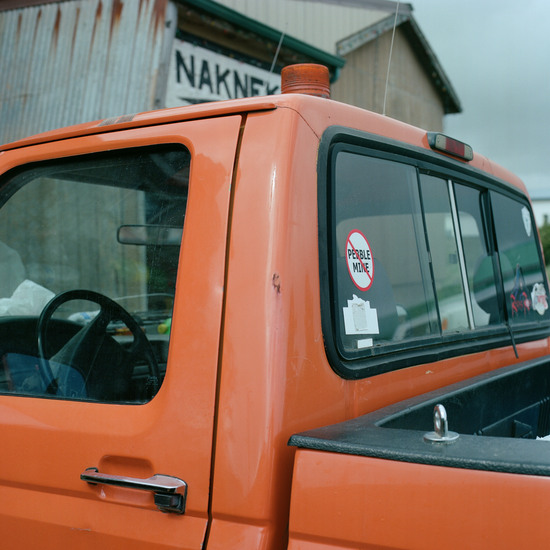 The sockeye salmon season itself is brief—only about a month long—but workers clock 16-hour shifts to take advantage of the window in June and July. During this time, harvesters net fish from 32-foot aluminum boats while tenders shuttle the catch to the shore where the salmon is processed immediately in boxy buildings with corrugated roofs weathered by the salt air. A good—or in this year’s case, great—run means that fishers can earn enough money for the whole year in just a handful of weeks.

The immediate and long-term value of the fishery is in no way lost on those in the community. Numerous parked cars, road signs, and bulletin boards display a sticker with a red circle around and a line through the words “Pebble Mine.” Though the proposed mining site is far upstream, the ramifications of the extraction of materials would almost certainly decimate the salmon run. Any mine waste released into the surface or groundwater would endanger wildlife.

“This is one of the last places on Earth that's undeveloped and has a renewable resource,” says Reuben Hastings, who serves as a fishing guide at a local lodge and began commercial fishing in middle school. “It's like a giant food truck that comes every year, and all you’ve got to do is take care of it. Why would you even do anything detrimental that might harm something like that?” 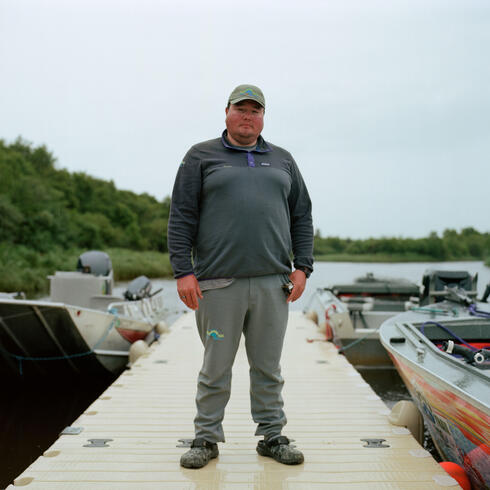 Earlier this year, the EPA cited its authority under the 1973 Clean Water Act to propose to ban the disposal of mining waste in the Bristol Bay watershed. More than 23,000 WWF supporters signed on to encourage the protection of the rivers, streams, and wetlands that support the salmon fishery and a subsistence-based way of life that has sustained Alaska Native communities for generations. A finalized proposal is expected by the end of the year.

A likely end to the mine, though, does not mean the end of WWF’s work in the region. Native communities in the watershed—many of which practice subsistence living—are preeminent stewards of the land with unmatched knowledge for conserving the area and wildlife. WWF aims to work alongside them to build long-term sustainable economies, including exploring new opportunities around salmon, increasing affordable housing, and encouraging young people to stay in the area.

“If we're going to work to remove the areas of the mining district, there has to be an alternative,” said Steve MacLean, managing director of WWF’s US Arctic Program, and an Alaska Native himself. “The best thing that we can do is work with those communities to find what that alternative is.”

And while the EPA’s proposal imperils Pebble Mine, the Native community of Pedro Bay made an equally impactful decision to stop the project, borne of thousands of years of culture tied inextricably to the land.

Beverly Cloud is leaning forward against the kitchen counter of her Pedro Bay home, talking about how she spent summers in the village with her grandmother, learning how to put up fish. That fish—a single piece a day, the size of one’s palm—saved her grandmother from starvation at one point. Beverly Cloud’s light brown hair glances off her shoulders with every gesture. A resealable bag full of fireweed blossoms rests by her elbows. Now she brings her own children to this place that nourished those before her, teaching them what she knows.

“We come down here every summer and we catch our fish and Chrissy's doing it now on her own,” she says, looking over to her daughter, Chrisdene Cloud, who sits in the adjoining living room, nodding her dark pixie haircut with a tender and specific deference. “She can run that smokehouse all on her own. That's just a tradition. Like, I came over here and my grandma taught me those things. It's just like a tradition.” 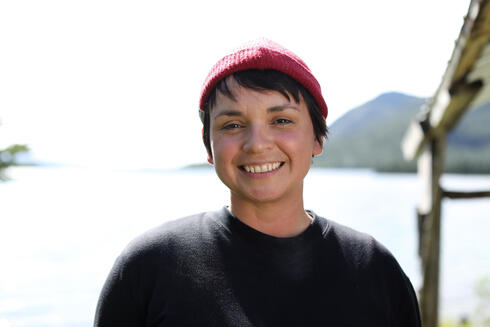 Chrisdene Cloud honors the practical and cultural importance of carrying on that tradition—and appreciates its weight. For her, it’s a way to not only learn subsistence living but to also pay homage to the people she and her family still remember and love. It is the most fulfilling thing she’s done in her life.

“My life's purpose, really, I think, is to be out here and to learn this and to save it for future generations so that this knowledge doesn't die,” Chrisdene Cloud says. “Because it will if people don't continue doing it and it's so important to our Alaska Native way of life.”

Recently, Beverly Cloud and her small community made an extraordinary contribution to the protection of that way of life, not just in Pedro Bay, but throughout the entire Bristol Bay watershed.

Like her neighbor Thiele, Beverly Cloud sits on the board of directors for the Pedro Bay Corporation, which comprises more than 200 shareholders of Aleut, Yupik, and Athabascan descent and ensures the financial independence of Alaska Natives by securing their corporation’s profitability long-term.

The corporation owns and manages more than 92,000 acres of land positioned between the Pebble Mine deposit and the deepwater port where Pebble Limited Partnership would need to ship ore to processors and load supplies on trucks to carry to the mine. Mine developers proposed a transportation road that would hug Lake Iliamna through Pedro Bay village before moving inland across salmon streams and largely untouched land. 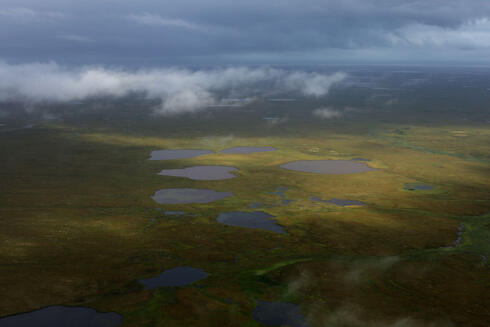 Shareholders and board members would need to vote: should they allow this road and quite literally pave the way for Pebble Mine, or should they protect their land, their livelihood, their culture?

As a board member, Beverly Cloud seriously considered the mining proposal. The village is remote and some who don’t live there full-time couldn’t afford to travel out there anymore. And working with the mine could bring money to the corporation and its shareholders. But when it came time to vote, a visual sprang to Cloud’s mind: the view from her office.

“I'd look out and look at this pristine landscape,” she says. “I’d literally look over there at the spot where they were going to put that road and imagine an industrial road. I said to myself, ‘no.’ I just couldn't do that. I couldn't live with myself if for some reason that were to happen.”

In 2021, more than 90% of Pedro Bay Corporation’s 197 shareholders voted to protect their land—and consequently their heritage and culture—by allowing the environmental nonprofit The Conservation Fund to purchase development rights on more than 44,000 acres of land as conservation easements for $18.3 million. An additional $500,000 will go toward the nonprofit Pedro Bay Benefits Corporation for shareholder education and cultural benefits, along with scientific research. The easements will restrict the development of the land and prohibit any right-of-way agreements with the mine in perpetuity. Though well on their way to raising the necessary funds, The Conservation Fund and partner organizations still need to secure the remaining $5 million by the end of 2022. 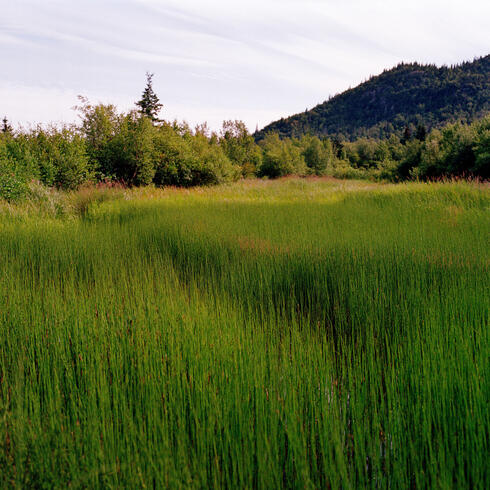 “It's a real estate transaction, basically, where the land ownership stays with the Pedro Bay Native Corporation, but there are no longer the development possibilities for it,” WWF’s MacLean says. “It is preserving the area and conserving it in a natural state.”

And it’s not simply the protection of ancestral lands; it’s safeguarding Native foods, Native culture, and Native stories. Coming to Pedro Bay year after year taps into the deeper truth of the place.

“For me, it's given me so much joy and connection to my culture, and more so than anything I've ever done,” Chrisdene Cloud says. “And just learning from my mom and knowing that she learned it from her grandmother and from other elders in our village, like Auntie Mary, and Hazel, and Uncle Walter, and all these people that we still remember and love. I don't know, it's really important.”

Chrisdene Cloud looks toward the kitchen. “Don't you think, Mom?”

Back at Thiele’s home, the three daughters remove their work gloves under a bright sun that will refuse to set later that evening. Two of them climb into kayaks and slip off into the choppy waters of Lake Iliamna.

Thiele—who also sits on the Pedro Bay Corporation board and voted against the road—watches them fight the wind as they paddle. This is their home for this week. And forever.

“I'm just glad my kids want to come back and learn how to cut fish and learn the process of it all,” Thiele says. “I'm hopeful that way. I am hopeful that I don't think the village will die because the young people love it. I have hope there.”

About the photographer: Brian Adams is an Inupiaq photographer based in Anchorage, Alaska, specializing in environmental portraiture. He is a co-founder of Indigenous Photograph.