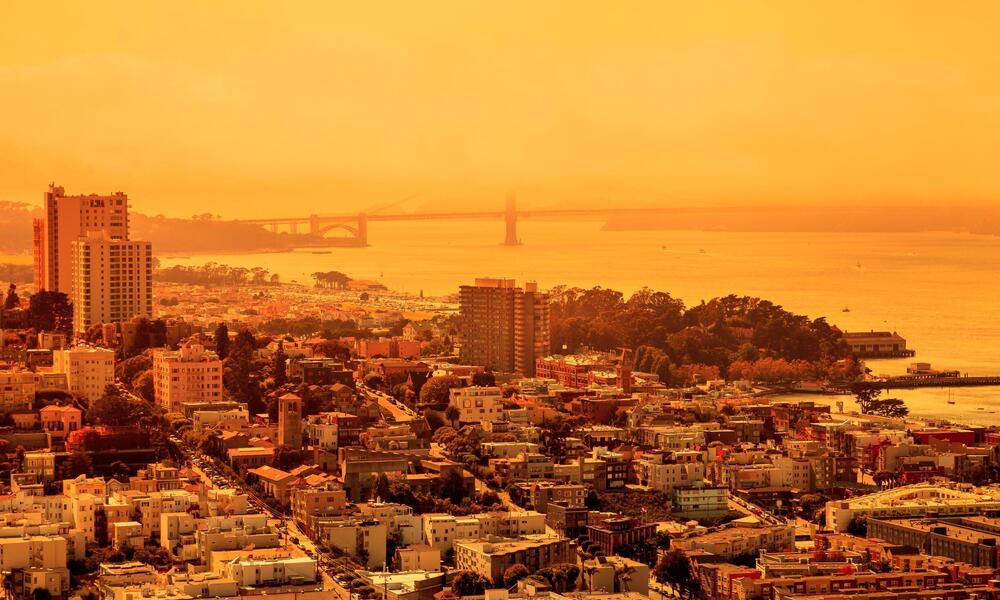 Raging flames. Air choked with smoke. Daytime sky dimmed to a deep red glow. Apocalyptic scenes have multiplied in recent weeks, as fires claim lives and incinerate communities across the West Coast. The flames are fueled by a confluence of interwoven drivers, including decades of fire management practices focused on fire suppression paired with the worsening climate crisis.

The impacts of this year’s fires multiplied at a massive scale, burning over 4.5 million acres across California, Oregon, and Washington to date.[1] That area is larger than the entire state of Connecticut.

Wildfires are a natural part of the American West, but between the climate crisis, land management since the conquest of Indigenous peoples, and a myriad of other issues, much of that landscape has changed. This year’s fires are fueled by a devastating combination of multiple extremes — extreme heat, drought, lightning, and wind — that together ignite larger and more intense flames.

The climate crisis plays a significant role in strengthening fires by warming temperatures, accelerating snowmelt, and intensifying record-breaking drought. These factors have driven the fire season to start earlier and end later, wreaking destructive impacts that are unparalleled in modern history. Climate change is rapidly worsening. Without transformative climate action, the role of the climate crisis in fueling fires will grow far worse.

A tower of smoke rising from an Azusa, California wildfire during hundred-degree heat.

Firefighters fight the Bobcat Fire in the hills above Los Angeles.

"Fire risk is caused by a number of cascading factors, including generations of land-use governance and development designed for a stable climate as well as fire management focused on suppression and control, combined with hotter and drier conditions produced by the changing climate. The drivers are deeply interconnected, and we need a similarly interconnected response to manage risk and protect people and nature in the future,” said Anita van Breda, senior director of environment and disaster management at WWF-US. “As depressing as these scenes are, they do not have to be the new normal. Our leaders need to act.”

The deep connection between nature and human health has never been more evident than it is today. Air quality in Portland, Seattle, and Los Angeles currently ranks among the worst in the world.[2] The wildfire smoke has traveled 4,970 miles to reach even Northern Europe.[3]

The good news is that there are concrete actions you and your government can take to have a meaningful impact on managing future fire risk. Transitioning to a 100% clean energy economy will significantly decrease the carbon emissions that drive climate change. You can call on Congress to do exactly that. Finally, it is of the utmost importance for our local, state, and federal officials to update land use, natural resource, and disaster management practices.

To protect the health of our communities and the environment we depend upon, we must reform fire risk management while boldly addressing and adapting to climate change. Without action that matches the scale of the crisis, fires will grow ever more devastating.