Whales and the plastics problem 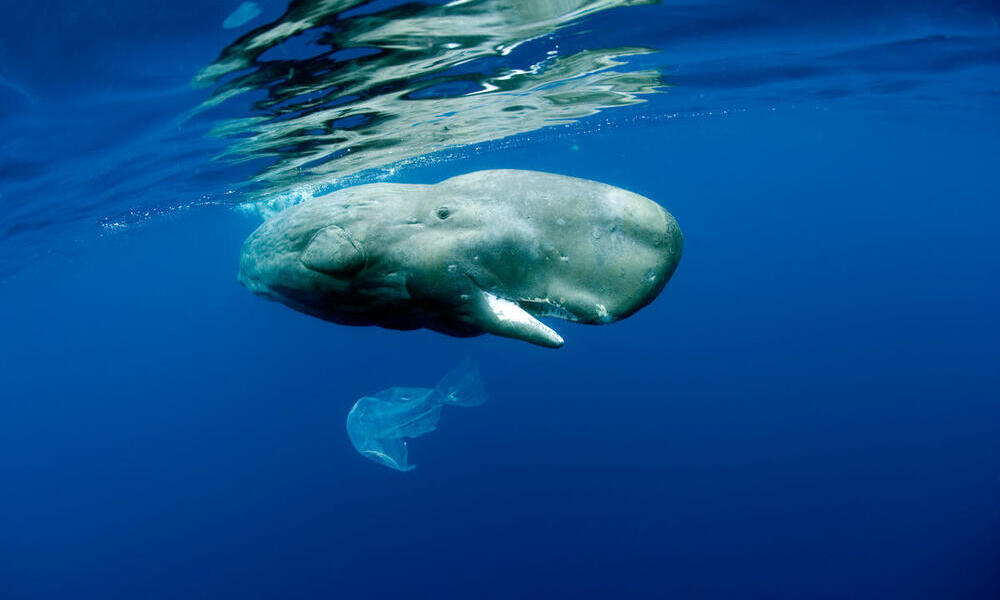 Today is a day to celebrate whales, one of the planet’s most iconic species. Protecting whales is crucial to protecting healthy oceans for all of us. They fertilize marine ecosystems and even help us fight the climate crisis—on average, a whale throughout its lifetime captures the same amount of carbon as 1,000 trees.

Whale health is linked to and is a critical indicator of ocean health. They even help drive a tourism industry of whale-watching worth more than $2 billion globally. Yet even these ocean giants are being impacted by the “deadliest predator in the sea”: plastic pollution.

Plastic waste pollutes every corner of the ocean, threatens marine wildlife, and even ends up in the seafood we eat. From our local beaches to remote tropical islands and polar regions, plastic is choking our oceans and killing wildlife. It is the most visible example of human impact on our seas. Currently, more than 11 million metric tons of plastic are flowing into the ocean each year. By 2050, there could be more plastic in the sea by weight than fish.

Put an end to plastic pollution

Help whales and other marine animals by asking government leaders to stop plastics from leaking into our oceans.

Globally, more than 240 wildlife species, including whales, are known to have ingested plastic, which can result in internal injuries and death. A recent study of marine life found that flexible plastic like plastic bags and packaging is responsible for the largest proportion of deaths from debris, primarily due to gastric obstructions. Whales are not the only species to be harmed by plastic debris. Dolphins, sea turtles, seabirds, and fish around the globe cannot escape it either, according to the study’s review of hundreds of scientific articles.

For many years, I have researched sperm whales, and admit they are my absolute favorite animals. Often referred to as the “elephants of the sea”, sperm whales, like their terrestrial counterparts, live in highly social and complex matriarchal societies. They feed on squid, spending 70% of their lives foraging in deep waters. Plastic debris is hitting this species particularly hard. One stranded whale had ingested 135 items—the highest number recorded for this species. These were predominantly plastic bags, which can look like squid to a whale. Whales and dolphins that die from debris have been observed swimming with difficulty in the days leading up to their deaths, which may increase their risk of being struck by ships or boats. For this reason, researchers think that death resulting from plastic may be more common than is currently being reported.

One of the most damaging types of marine plastic pollution is abandoned, lost, or discarded fishing gear—commonly called “ghost gear.” About 10% of the world’s ocean plastic pollution is made up of plastic-based fishing nets and rope. Every year, 300,000 whales, dolphins, and porpoises get accidentally entangled in nets and lines and die a slow and painful death through suffocation, starvation, or exhaustion.

Plastics can take hundreds or thousands of years to decompose and wreak havoc on the environment in the meantime. Ghost gear can continue to catch any marine species in its path for years, potentially decimating important food resources as well as endangered species, such as whales, dolphins, seabirds, and turtles. Marine plastic pollution damages vital ocean habitats and poses dangers to navigation and livelihoods.

Even microplastics—tiny plastic particles less than 5 mm in size and the most abundant debris floating in the marine environment—have been found in whales and their prey. But their impacts are very different. This micro-pollution can break down from sunlight and other environmental factors into its invisible toxic chemical compounds. These compounds pose a risk to marine ecosystems and biodiversity, working their way up the marine food web over years and across generations of species (called biomagnification and bioaccumulation), and can disrupt the development and reproductive health of marine animals.

Plastic pollution is a global problem that requires a global solution

Global plastic pollution has been created in one generation and, through coordinated global effort, we are working to solve it in one generation. The challenge can be tackled in a couple of ways:

For me, whales are inspirational ocean icons. The good news is that more than 750,000 people have signed WWF’s petition to fight plastic pollution and it’s a great start. Support for a UN treaty is rapidly growing; an increasing number of countries have expressed their support for it and 50 companies have endorsed a call for a new treaty to be negotiated. This coordinated global response is urgent to help governments and businesses level the playing field and drive change in a way we can tackle this in one generation.

To save whales, we need to keep our oceans healthy. To save whales for future generations, we need to prevent plastic such as plastic bags, plastic packaging, plastic sheets, fishing rope, nets, tackle, and balloons from entering the ocean and move away from being a plastic-based society.