Where do rhinos live? And eight other rhino facts

“Rhinos are facing challenges across their range, but seeing the success of greater one-horned rhino recovery in Asia is a good motivator that reminds us of the importance of this conservation work. I will always work hard to conserve these wonderful pachyderms.”

Rhinos are one of the oldest groups of mammals that once roamed throughout Asia and Africa. With a population of around half a million at the beginning of the 20th century, there are now only an estimated 27,000 left in the wild. Despite the conservation challenges that rhinos continue to face, initiatives to recover their populations have started to pay off, with three of the five remaining rhino species’ populations growing. WWF will continue to work with governments, communities, and partners to recover and grow rhino populations and to end the illegal trade of rhino horn that’s threatening this key flagship species.

WWF works to save rhinos across Asia and Africa by building capacity and supporting the development and execution of strategic conservation actions designed to give these iconic creatures a chance in the face of multiple challenges.

Where do rhinos live?

There are five species of rhino found in the world—two in Africa, and three in Asia.

What species of rhinos live in Asia?

There are three species of Asian rhinos—the greater one-horned rhino found in India and Nepal; the Sumatran rhino found on the islands of Sumatra and Borneo; and the Javan rhino that is only found in one protected area on the island of Java, Indonesia.

What are their population statuses?

The greater one-horned rhino is listed as Vulnerable by the International Union for Conservation of Nature (IUCN), with around 3,700 individuals left in the wild. There were only around 200 individuals at the beginning of the 20th century, but strict protection and management actions from Indian and Nepalese wildlife authorities and partners have brought the species back from the brink of extinction. Javan, Sumatran, and black rhinos are Critically Endangered—there are only around 74 Javan rhinos, less than 80 Sumatran rhinos, and around 5,500 black rhinos remaining in the wild. According to the IUCN, white rhinos are Near Threatened, with approximately 18,000 individuals.

“We live in challenging times for the survival of many species, and for the future of our own. However, the future for Africa’s rhinos is filled with hope, as a result of the tremendous work by many dedicated people in the field, and the commitment of local communities and governments to make sure that black and white rhinos continue to survive in the wild, as well as the ecosystems on which they depend. For that, I am extremely grateful.”

What are the differences in appearance among the rhino species?

Black rhinos are the smaller of the two African rhino species. Both black and white rhinos have two horns, and while there are a number of visual characteristics that differentiate them, the easiest way is by looking at the shape of the mouth. As grazers, white rhinos have a square upper lip, while black rhinos, who are browsers, have a hooked upper lip.

What are the biggest threats to rhinos?

Habitat loss and degradation and poaching are the main threats facing Asian and African rhinos. Despite a ban on international trade in rhino horn since 1977, illegal demand in Asia remains high and fuels poaching in both continents. The Sumatran rhino faces an additional threat: isolation. This species—of which less than 80 survive in about a dozen non-viable subpopulations in Indonesia—are simply too scattered to find mates to breed.

Why are rhinos so important to the environment?

Rhinos are ecosystem engineers in the places where they live. For instance, grassland habitats with access to water are important for greater one-horned rhinos, and they help maintain the health of these grasslands and the waterholes in which they wallow, which enables optimal conditions for other small herbivores that share the space with them. Rhinos also disperse the seeds of plants and fruit they’ve eaten through their dung. 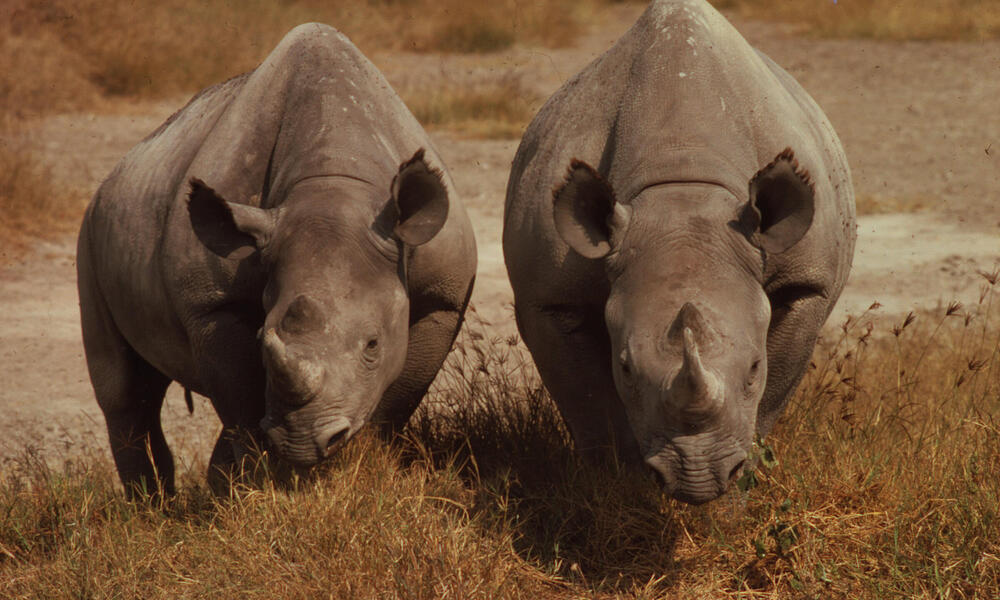 What are rhino horns used for?

Rhino horn is often ground up and used in traditional Asian medicines and is thought to treat a range of ailments from fevers to cancer. Its use as a status symbol to display success and wealth is also increasingly common. Unfortunately, the illegal trade of rhino horn throughout Asia, principally in China and Viet Nam, continues to persist and threaten wild rhinos despite the international ban on the trade of their horn.

Can rhino horns grow back?

Rhino horn is made of keratin, the same substance as human hair and fingernails. Rhinos are born without horns, but within just a couple of months, a tiny stub appears—and their horns continue to grow for the rest of their lives.

What is WWF doing to help rhinos?

There are three key things that can be done to conserve rhinos: protect the individuals, protect their habitat, and establish new populations through translocation to areas that historically held rhinos. WWF supports these conservation actions on the ground. Specifically, through community-based conservation approaches, we are building support for rhino conservation in local communities and supporting local people in their desire to become even stronger custodians of these magnificent animals.

WWF also supports habitat management efforts to ensure ecosystem health for rhinos and works with governments and other partners to expand rhino range.