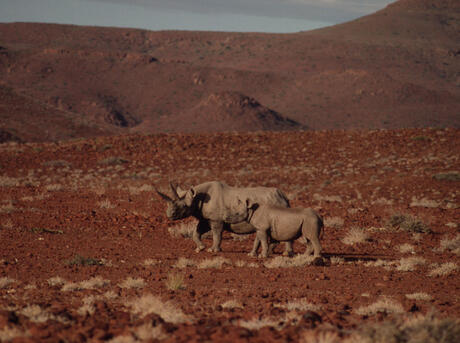 Learn more about the five different species of rhino.

Rhinos once roamed many places throughout Europe, Asia, and Africa and were known to early Europeans who depicted them in cave paintings. At the beginning of the 20th century, 500,000 rhinos roamed Africa and Asia. By 1970, rhino numbers dropped to 70,000, and today, around 27,000 rhinos remain in the wild. Very few rhinos survive outside national parks and reserves due to persistent poaching and habitat loss over many decades. Three species of rhino—black, Javan, and Sumatran—are critically endangered. Today, a small population of Javan rhinos is found in only one national park on the northern tip of the Indonesian island of Java. A mainland subspecies of the Javan rhino was declared extinct in Vietnam in 2011. Successful conservation efforts have led to an increase in the number of greater one-horned (or Indian) rhinos, from around 200 at the turn of the 20th century to around 3,700 today. The greater one-horned rhino is one of Asia’s biggest success stories, with their status improving from endangered to vulnerable following significant population increases. However, the species still remains under threat from poaching for its horn and from habitat loss and degradation.

In Africa, southern white rhinos, once thought to be extinct, now thrive in protected sanctuaries and are classified as near threatened. But the western black rhino and northern white rhinos have recently become extinct in the wild. The only two remaining northern white rhino are kept under 24-hour guard in Ol Pejeta Conservancy in Kenya. Black rhinos have doubled in number over the past two decades from their low point of fewer than 2,500 individuals, but total numbers are still a fraction of the estimated 100,000 that existed in the early part of the 20th century. 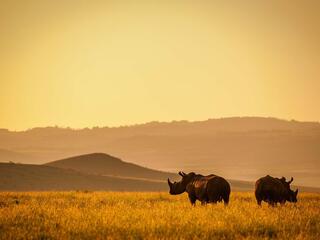 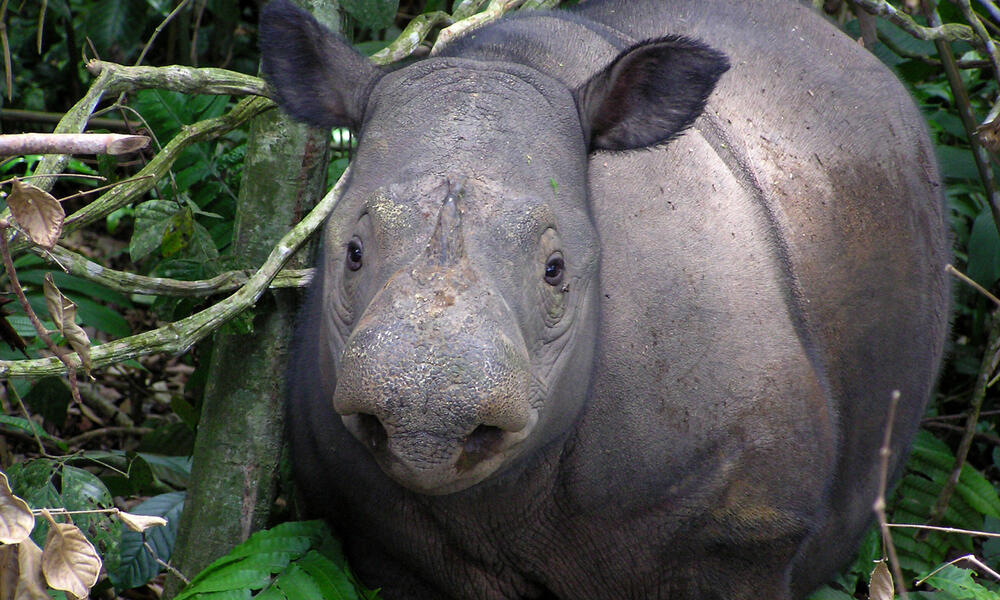 As economic development, changes in grassland composition, logging, and agriculture degrade and destroy wildlife habitats, rhino populations are declining. Those remaining rhinos live in fragmented, isolated areas and are prone to inbreeding, as healthy genetic mixing is more difficult among smaller groups. Also, having a large population confined to one protected area can lead to the allele effect where breeding is depressed due to lack of resources and disease can spread rapidly through these highly-concentrated populations.

The increase in human populations also puts more pressure on rhino habitats as well, shrinking the living space for rhinos and increasing the likelihood of contact with humans—often with fatal results.

Poaching, driven by consumer demand for rhino horn primarily in Asia, poses the biggest threat to rhinos. Most of these horns find their way into the illegal market in Vietnam, where law enforcement is weak and criminal networks grind up the horns to sell for use in traditional medicines or sell them whole as a high-value gift item. China is an important consumer market as well, where rhino horn enters art and antique markets and is sometimes acquired as an investment purchase.

As the growing middle class in both China and Vietnam become more affluent and can afford the high cost of rhino horn, they are driving up the demand on the international black market. Rhino poaching levels hit record highs in 2015, with poachers slaughtering at least 1,300 rhinos in Africa. Six hundred and ninety one rhinos were poached in South Africa in 2017. That number slightly decreased in 2018 with 508 rhinos poached.

Although international trade in rhino horn has been banned under the Convention on International Trade in Endangered Species of Fauna and Flora (CITES)—a global agreement between governments to follow rules to monitor, regulate, or ban international trade in species under threat—since 1977, demand has remained high and continues to fuel rhino poaching in both Africa and Asia. Criminal syndicates link rhino horn source countries like South Africa with a series of transit points and smuggling channels to get the product to its final destination in Asia. The main markets are now in countries like Vietnam and China where rhino horn has become a party drug, a health supplement, and a hangover cure. In Vietnam, there is also a newly emerged belief that rhino horn cures cancer.

WWF plays a vital role in the fight to protect rhinos. With nearly 60 years of experience, we know that successful rhino conservation requires a comprehensive approach that brings together the world’s leading experts to develop global strategies to save and recover these species.

WWF secures and protects rhino populations and establishes new populations through translocations—the process of moving rhinos from parks with significant populations to others that historically held rhinos but currently do not. We help with community-based conservation approaches for people living in and around important rhino habitats.

We work to curb poaching by implementing innovative technology and building the capacity of government and community rangers on the ground. We also tackle illegal trade of—and demand for—rhino horn through advocacy and strengthening of local and international law enforcement to bring trafficking perpetrators to justice.

WWF collaborates closely with government agencies in the US and globally as well as other international and local non-governmental organization partners to broaden support for rhino conservation.

WWF has a long history of supporting rhino translocations with the aim to establish new populations within their former range and move animals from risk areas to safe havens. In South Africa, WWF, in partnership with Ezemvelo KZN Wildlife and Eastern Cape Parks and Tourismand partners started the Black Rhino Ranger Expansion Project (BBREP) in 2003. Since its start, the project has helped successfully establish 12 new black rhino populations in safer, more spacious locations within their former range and relocated a total of 201 critically endangered black rhinos. During translocations, some rhinos are airlifted by helicopter. They are first sedated and then carefully airlifted to awaiting vehicles which take them to their new locations. Translocations reduce pressure on existing wildlife reserves and provide new territory within their former range where rhinos have a greater opportunity to increase in number. Creating more dispersed and better protected populations also helps keep rhinos safe from poachers.

In Asia, a number of successful translocations have been conducted in both India and Nepal, where the translocation process is slightly different from Africa. In Asia, candidates for translocation are tracked in their grassland habitat with the help of park and research staff and their captive elephant teams. Once sedated, they are then loaded into trucks, provided an antidote, and driven to their new home territories.

We focus on the conservation of four of the five rhino species, working to contribute to their population recovery and growth by achieving an annual growth rate of at least 5% for key populations:

WWF is working with government agencies and partners in these countries to support law enforcement agencies, build support for rhinos in surrounding communities, develop and build on innovative tech solutions, and equip and train rangers to stop poachers. We also support translocation efforts to establish new black rhino populations in these countries to ensure the species is healthy and growing.

Javan rhino
Only 67 Javan rhinos are currently estimated to remain in the world, making this critically endangered rhino species one of the most threatened large mammal species on Earth. They’re confined to one park on the extreme southwestern tip of the Indonesian island of Java—Ujung Kulon National Park. WWF is supporting Rhino Protection Units in Ujung Kulon National Park, Java, to safeguard the last remaining population of Javan rhinos from poaching and habitat loss. WWF is working to remove the invasive arenga palm tree, which has squeezed out the rhino’s native food plants in 6,178 acres of former habitat within the park. Extraction of the palm within the park will be followed by active restoration of natural vegetation and food plants for rhinos. WWF also conducts research, including camera trap monitoring, which continues to reveal critical information about behavioral patterns, distribution, movement, population size, sex ratio, and genetic diversity.

Sumatran rhino
The Sumatran rhino is the most threatened of all rhino species, with fewer than 80 surviving in fragmented sub-populations across Indonesia on the islands of Sumatra and Borneo. While there are fewer Javan rhino individuals, the remaining Javan rhino all live in one site and are a healthy breeding population. The Sumatran rhino, on the other hand, all live in very small and highly fragmented populations on the islands of Sumatra and Kalimantan in Indonesia. These remaining animals are isolated in fragmented pockets of forests that prevent them breeding. The smallest rhinos on Earth, Sumatran rhinos remain in small and isolated areas, limiting reproduction in the wild. As a result, these populations have been on the decline.

In support of the government of Indonesia’s efforts, WWF, Global Wildlife Conservation, International Rhino Foundation, International Union for Conservation of Nature, and the National Geographic Society have joined together with Indonesian partners on-the-ground to launch a Sumatran Rhino Rescue effort. Beginning in 2018, this alliance of organizations aims to relocate the widely dispersed rhino populations from the wild to managed breeding facilities designed specifically for their care. In addition to securing the remaining rhino population, the effort will develop the infrastructure to care for the rhinos and grow their numbers with the long-term objective of releasing these animals back into the wild.

Greater one-horned rhino
The recovery of the greater one-horned rhino is among the greatest conservation success stories in Asia. Today, this rhino population stands at around 3,700 individuals, a significant increase from around 200 remaining at the turn of the 20th century. Strict protection and management action from Indian and Nepalese authorities and their partners are responsible for bringing the species back from the brink. However, the species’ remarkable recovery is constrained by a lack of adequate habitat and the ongoing threat of poaching for their horns. Currently, 85% of all greater one-horned rhinos are concentrated in just two locations in India and Nepal.

To ensure continued recovery of the greater one-horned rhino, WWF is supporting the establishment of new populations by translocating rhinos to protected areas with suitable habitat within the species’ historic range. Translocating rhinos from the two main populations will allow both groups to expand into new territories and will also decrease densities in crowded parks, leading to increased breeding rates. We are setting up systematic monitoring programs to measure the health and status of resident and newly translocated rhinos, as well as supporting effective protection measures.