Where the meadowlark sings

Grassland birds are spectacular in their beauty and their behavior. The meadowlark’s song is as much a part of the grasslands as the plants themselves, and there’s nothing more thrilling than to look out across a prairie and see a short-eared owl gliding silently, wingtips brushing grasstops, as it searches for its prey. The grasslands where these birds live are often referred to as “flyover country,” but it only takes a few moments in these precious ecosystems to realize just how alive they are with birds, insects, and mammals.

Unfortunately, grassland birds also have the tragic distinction of being North America’s fastest-declining group of birds. Populations of four species in particular—the chestnut-collared longspur, lark bunting, thick-billed longspur, and Sprague’s pipit—have declined by as much as 80% since the 1960s. One of the leading drivers of their decline is the loss of the native grasslands that they depend on. Healthy, untilled grasslands provide these birds, and many other species, with the nesting habitat and the food that they need to provide for their young and refuel before migrating south for the winter. 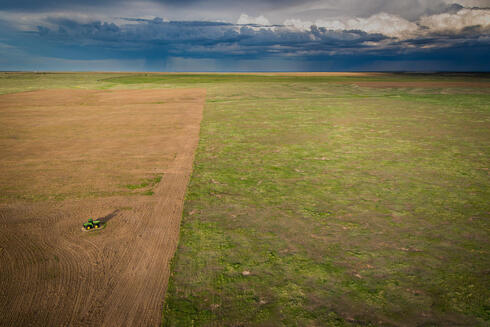 WWF’s 2021 Plowprint Report has revealed that for the second year in a row, North American grasslands have been plowed up at an increasing rate. In 2019 alone (the year analyzed by the 2021 report) 2.6 million acres of grasslands were destroyed across the US and Canadian portions of the Great Plains. This is an area larger than Yellowstone National Park. Within the Northern Great Plains (NGP), the most intact subset of the Great Plains, 660,000 acres were plowed within the same year.

Because birds eat insects and seeds, their abundance reflects the ecological health of their habitat. The more sensitive species of grassland birds require native grasslands at large scales to maintain healthy populations. Individual species also require grassland vegetation of different heights, which are mostly managed by the activities of grazing animals such as pronghorn, elk, and cattle. Over 75% of the land in the Northern Great Plains region is privately owned, and cattle ranching is the primary livelihood in areas where grasslands are intact. WWF’s Sustainable Ranching Initiative is working with the ranching community and Native nations to help conserve grasslands at a large scale.

Grassland conservation policy is also something that is urgently needed. If enacted, the North American Grasslands Conservation Act (NAGCA), which has been modeled after the popular and effective North American Wetlands Conservation Act, would kickstart the voluntary protection and restoration of grasslands. If passed, a NAGCA bill could prevent additional conversion of native grasslands by creating a flexible, voluntary, and innovative program for landowners. Participants could see improved grassland and rangeland health and management, increased biodiversity and habitat for grassland birds, pollinators, and other wildlife, and greater levels of carbon sequestration to name just a few of the benefits.

To survive, Grassland birds will need the support of NGOs like WWF, private landowner participation, programs on Native lands, and pro-grassland policies that provide a haven for them to feed and find shelter. So, the next time you’re flying from coast to coast and look down upon the grasslands from your airplane window, don’t just think about the sea of vegetation. Instead consider the thousands of species that are found within, like songbirds, that need our support. With it, perhaps the meadowlark will always have a song to sing and a place to sing it.