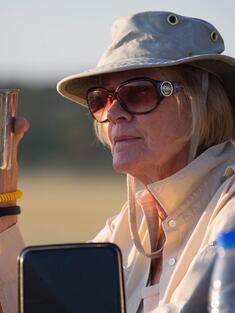 PAMELA ANNE ISDELL was born in Scotland and was educated in Zambia from the age of eight. In the 26 years she lived in Africa, she developed a passionate commitment to habitat preservation and species survival, and an abiding connection to its people. She has also lived in South Africa, Australia, the Philippines, and Germany, and traveled extensively (126 countries) with her husband Neville as part of supporting his career. But she has always returned to southern Africa for annual safaris, becoming more and more involved in issues surrounding habitat sustainability. As a trustee of the Isdell Family Foundation, and in her work with her husband, Neville, who is former chairman and CEO of The Coca-Cola Company and former chairman of WWF-US, she has helped support a broad portfolio of nonprofit organizations, especially The Nature Conservancy (TNC) and Peace Parks South Africa, and is an ambassador for and patron of the African penguin. An avid birder, Isdell has been appointed to the BirdLife International Advisory Group and has become an honorary patron of BirdLife South Africa. As a resident of Georgia since 1989, her interest has developed into a deep involvement in The Nature Conservancy. She has served as both a board and executive committee member of the Georgia chapter of TNC, for which she cochaired a successful $25 million capital campaign in 2012, and was on the advisory board for their latest campaign, Nature Unites Us, successfully completed in July 2020. She is also a m ember of TNC’s Africa Council and the committee for their Africa capital campaign. In addition, in 2018 she successfully completed, as cochair with her daughter Cara, a $20 million capital campaign launched by Fernbank Museum of Natural History to preserve the largest old-growth forest in a major metropolitan area in the US, Atlanta’s Fernbank Forest. She has just become patron of the Animal Welfare Society in Cape Town.