The Faroe Islands see little daylight during the winter; on the solstice, the sun peeks over the horizon for around five hours. During these dark months, beneath the surface of the ocean, a sunken forest prepares to burst into life. Supported by buoys, ropes of seaweed seedlings absorb the North Atlantic’s nutrients and wait for the spring.

When spring arrives, photosynthesis begins. Light is transformed into biomass, and suddenly the seaweed is everywhere. Huge sheets of it snake up the ropes that dangle down through the uppermost 30 feet of the ocean—just below the waves that roll across the surface.

This is a farm, but not as you know it. Banish your images of wheat and tractors; on this farm, the seaweed is the crop, and the ocean is field and furrow rolled into one. The first harvest is usually ready by late April, at which point the seaweed is sliced off the lines, collected in boxes, and brought to shore.

The company that owns the farm is called Ocean Rainforest. Its director, Olavur Gregersen, believes that seaweed farming is the future. “Some 10 years ago, a young man came to me with an idea about how the Faroe Islands could mitigate climate change by growing a forest in the ocean,” he says. “That was basically how it started.” 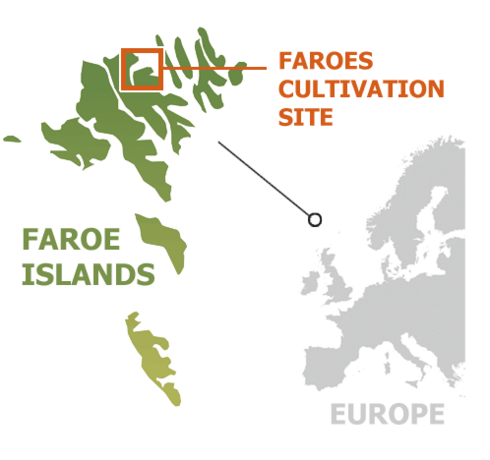 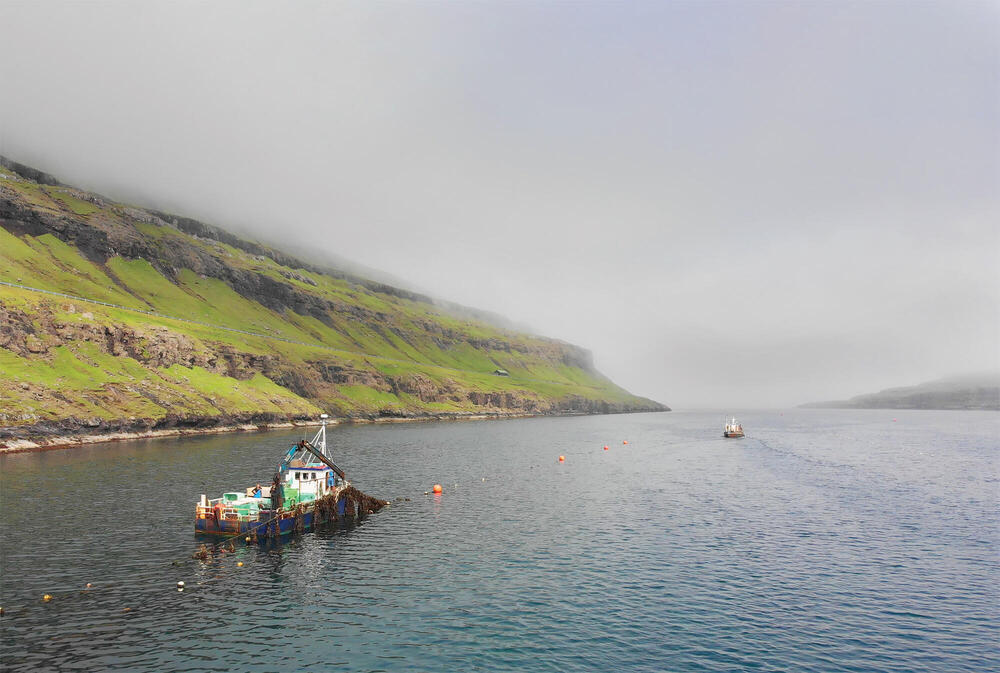 While The Faroe Islands have no native forests, this ocean farm is a good proxy for the ecosystem services that trees provide. Columns of seaweed absorb carbon dioxide. And as they grow, the huge organisms not only help tackle climate change but also create a pop-up habitat for marine species—just as trees absorb CO2 and provide shelter for wildlife on land.

When seaweed is left unharvested, some of the carbon it absorbs is eventually sequestered at the bottom of the ocean, where it can remain for centuries. But the point of seaweed farming is to harvest the crop. When this occurs, up to half of the seaweed produced will still wind up on the seabed as a result of the farming process, while the rest will be transformed into other products, including feed for livestock. Working with farmers to integrate seaweed into the diets of their animals could also lead to big environmental gains. 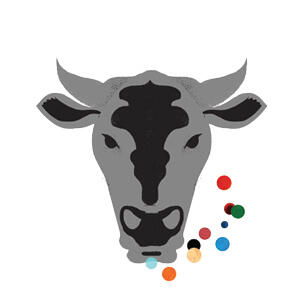 For example, swapping some soybeans for seaweed would mean that the planet’s supply of poultry, pork, dairy, and beef would require less arable land for feed crops. This could reduce deforestation and degradation in sensitive ecosystems such as the Amazon and the Cerrado, and decrease the need for resources like pesticides, water, and fertilizer. Scientists have also suggested that adding seaweed to the diets of cattle could significantly reduce methane emissions without diminishing milk production.

Paul Dobbins is listing all these benefits with earnest enthusiasm from his office in New England. He is WWF’s lead specialist on seaweed and shellfish, but before that he spent a decade working on a commercial kelp farm. This means he’s personally familiar not only with the public perception that his favorite crop is little more than a slimy beach weed—but also with the plant’s real-world virtues.

“I’m a convert,” he admits with a chuckle. “But I actually come to it as a cutthroat capitalist.”

Like Gregersen, Dobbins is especially excited about seaweed’s ability to capture or “take up” carbon. Yet despite its potential, seaweed farming is still a long way from making even a dent in mitigating the world’s greenhouse gas emissions. Humans have been harvesting seaweed for thousands of years, and seaweed cultivation currently takes place in around 50 countries. But to make any meaningful impact, the industry must scale up in a big way. This means expanding beyond the calm waters of shorelines and bays—where all but three of today’s farms are found—and into the exposed open ocean.

And that’s exactly what WWF wants to achieve. With the support of the Jeremy and Hannelore Grantham Environmental Trust, WWF-US is investing around $884,000 in Ocean Rainforest to help the company test seaweed rigs in offshore, high-energy environments, expanding production and taking the industry to the next level. By investing in this small Faroese company, WWF is hoping to catalyze a shift in how humanity thinks about ocean farming.

The money is known as an impact investment: Its aim is “not only to realize a profit but also to generate a measurable social or environmental impact,” explains Nik Sekhran, WWF’s chief conservation officer.

Spending almost a million dollars on a proof-of-concept seaweed farm may seem like a risky strategy. And it is risky—that’s the point.

With huge technical challenges and no roadmaps, open-ocean seaweed farming doesn’t make much sense in your average investment portfolio—at least not yet. But for an investor looking to make a difference, it’s an attractive opportunity.

The maxim that high risks lead to high rewards remains true; in this case, the reward could be a game-changing tool for tackling climate change. Analysis by WWF, based on figures from the World Bank, suggests that farming just 6.51% of the world’s exclusive economic zones (within 200 nautical miles of shore) would utilize all the carbon that is added to the oceans each year to begin to reverse ocean acidification.

The Grantham Trust is no stranger to risky, mission-driven bets. “Mitigating climate change requires accelerating innovation,” says investment strategist Jeremy Grantham, who founded one of the world’s first index funds in the 1970s. But impact investing is a new strategy for WWF—one that aims to flip how the organization approaches the problem altogether. It’s not conservation as usual. 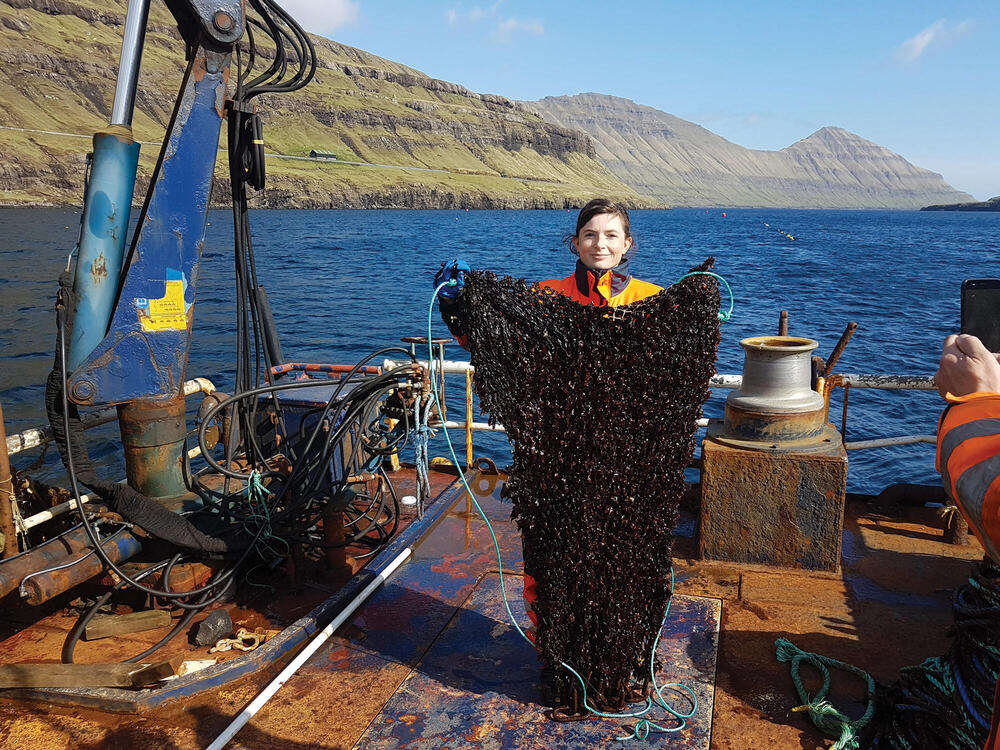 Urd Grandorf Bak, a macroalgal cultivation expert with Ocean Rainforest, holds a net from an experiment in growing dulse, a nutrient-rich red macroalgae that can be used in cooking.

“Impact Investing is a theory of change that focuses on ideas that are often small and early stage, and on taking a risk that a few of them can overcome all the roadblocks and become large and transformational—which is when we see real conservation impact,” says Raj Kundra, WWF’s vice president of international finance. “If successful, this investment has the potential to influence the way thousands of farmers around the world think about cultivating seaweed, and the potential to create a new food substitute that would have far more impact further down the line.”

There will be challenges. Unsurprisingly, the open ocean is a difficult place to operate a commercial farm; boats and equipment must be able to withstand the stormiest seas. That’s why WWF is helping Ocean Rainforest put its expertise and technology to the test.

“This farm is in one of the highest-energy zones in the world, with the exception of the Southern Ocean,” says Dobbins. “If this rig can survive winters in the Faroes, it will survive almost anywhere.”

Dobbins says this is real-world experimentation: “As an organization, we have to be able to embrace uncertainty. That’s what WWF does so well—puts together the science and the partnerships to allow us to take these big swings that might really have the possibility of changing the world for the better.”

Meanwhile, in the Faroe Islands the days are getting longer; for a couple of months each year, the sun barely sinks below the horizon. Olavur Gregersen and his team plan to make the most of the light. From the end of April until mid-July, they’ll harvest seaweed every day—then gear up for the second harvest from late September through the end of the year. (“It is not always sunny and blue sky,” he remarks wryly; the islands are blessed with rain for approximately 279 days per year.)

But there are rewards for the cold days spent at sea. From the vantage point of his boat, Gregersen can observe the sea creatures that are drawn to his sunken farm. Around the ropes is a fiesta of activity: Fish feast on other species that inhabit the seaweed, and seabirds feast on the fish. In a world where farming is too often connected to the loss of biodiversity, this is a cause for celebration.

As Ocean Rainforest expands, Gregersen and his team will be documenting the impact of their work on the ecosystem. But already, “we can see, just by observation, that we have an influence,” he says. “We are giving something to it, rather than taking something away.”

Open-ocean seaweed farming could help move the needle on climate change. But farmers face a significant funding gap between “friends and family” investments and what’s needed to take the industry to scale. Here’s what could help.

Seaweed can be used in a variety of products, including livestock feed, food, and biodegradable packaging. Upping demand for seaweed would pull in new suppliers and increase the attractiveness of funding early-stage companies and existing farms looking to expand.

It’s difficult for investors to fund companies that lack performance data. Proof-of-concept farms can take technology and processes from untried and unproven to known and investable.

Seaweed companies need both regulatory and social permission, or social license, to operate in the commons of the open oceans. Certainty about what’s allowed and acceptable—knowing whether a farm can operate or expand—improves access to capital and encourages growth.