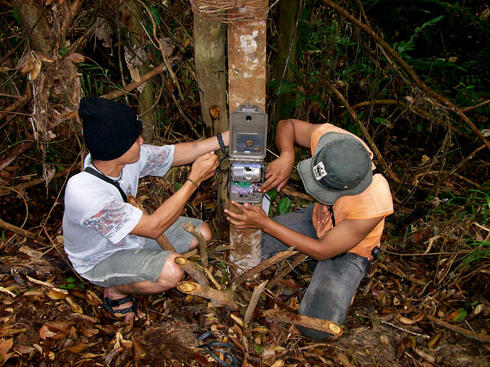 Although infrared sensors allow camera traps to take pictures on their own, WWF scientists and field staff can claim full credit for the amazing images you see here. These teams do extensive research -- gathering information through community questionnaires and by conducting surveys of animal tracks -- in order to determine the best area to place their cameras. Then they must trek to remote locations to obtain the film and ensure that the camera traps are functioning properly. It is also important to remember that these pictures, while amazing in their own right, are actually scientific data that scientists will use to obtain critical information about wildlife and their habitats. Meet some of our dedicated conservationists and find out more about their work and what makes them tick.

Sunarto is a wildlife biologist and the new 'tiger man' in the Tesso Nilo Landscape, on the Indonesian island of Sumatra. Born on Java, Sunarto has spent most of his life away from home, studying at universities in Jakarta, Indonesia and in Norwich, UK, and conducting research in Bukit Barisan Selatan and Kerinci Seblat National Parks.

Currently, Sunarto is working with the WWF species program -- which is supporting his PhD research in Fisheries and Wildlife Science from Virginia Tech -- focusing on tiger ecology and distribution in the Sumatran province of Riau. Sunarto and his team are using camera traps to estimate the population of tigers and study their range and movement in order to help them survive. Sunarto is passionate about his research and believes strongly in its value to conservation.

"I cannot imagine getting as much information and knowledge about the wildlife in the region without the aid of the camera traps," he says. "As the saying goes, 'A picture says a thousand words.' It is much easier and faster to convince people the importance of an area or a species when you show them these pictures."

His project's specific research objectives include establishing tiger presence/absence maps; identifying core breeding areas for tigers; pinpointing hotspots for tiger-human conflict and developing or refining strategies to mitigate it in the Riau province; establishing density estimates of tigers and prey in different habitat types; and establishing a monitoring system for tigers and prey.

One of the biggest practical challenges of the tiger study is covering a large area (almost 12,000 square miles) with limited access and difficult terrain in a limited time. Sunarto and the Tiger Team typically go into the field for about ten days, using four-wheel-drive vehicles and trail motorbikes to reach villages and accessible target areas; in some cases they must use boats. Once in the target areas, the team moves about on foot, following existing human or game trails or creating their own. Often, they encounter people involved in illegal activities who are suspicious and not pleased with their presence.

He thinks that his work will help people in Riau live in a harmony with the wildlife, including tigers.

"I would like to see that the wildlife have enough room to survive and recover, while the people have enough and sustainable resources to live," he says. Within a shorter, time period, he thinks it is more realistic to expect that a few more conservation areas critical for the wildlife corridors are protected by government.