Snow leopards have evolved to live in some of the harshest conditions on Earth. They scale the great, steep slopes of mountains in Central Asia with ease, blending into the landscape. But these majestic and elusive cats face many threats including habitat loss and degradation from climate change and human encroachment, retaliatory killings resulting from human-wildlife conflict, reduced prey, and poaching.

Here’s a look at what you should know about the species:

1. Where do snow leopards live?

Snow leopards live across a vast area in northern and central Asia's high mountains, including the Himalayan region. In the Himalayas, snow leopards live in high alpine areas, mostly above the tree line and up to 18,000 feet in elevation. They are found in 12 countries—including China, Bhutan, Nepal, India, Pakistan, Russia, and Mongolia.

Snow leopards have thick grey and yellow-tinged fur, with solid spots on their head, neck and lower limbs and rosettes over the rest of the body. Rosettes are large rings enclosing smaller spots. WWF relies on spot patterns to identify individual snow leopards when conducting camera trap research. Snow leopards also have very long, thick tails that they use for balancing on rocks and wrapping around their bodies for protection from the cold. Their short forelimbs and long hind limbs make them very agile, and they can jump as much as 50 feet in length. They also have large, furry paws that act as both snowshoes and padding on sharp rocks. 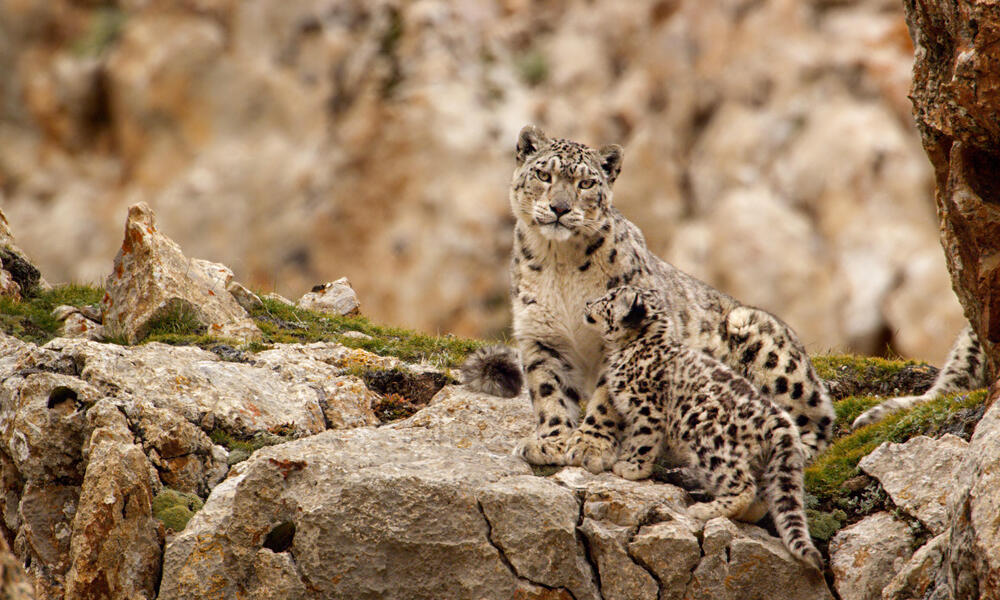 3. Why are snow leopards called “ghost of the mountains?"

Snow leopards are known as the “ghost of the mountains” because of their elusive nature. In addition to being very shy, the coloring of their coats make them difficult to see against the snowy, rocky environment they live in. Snow leopards are solitary creatures—since it is so rare to see two snow leopards together, there actually is no term for a group of snow leopards.

4. How many snow leopards are left in the wild?

There are an estimated 4,080-6,590 snow leopards in the wild, but it is difficult for scientists to know for sure. They are listed as 'Vulnerable' by the International Union for Conservation of Nature (IUCN). 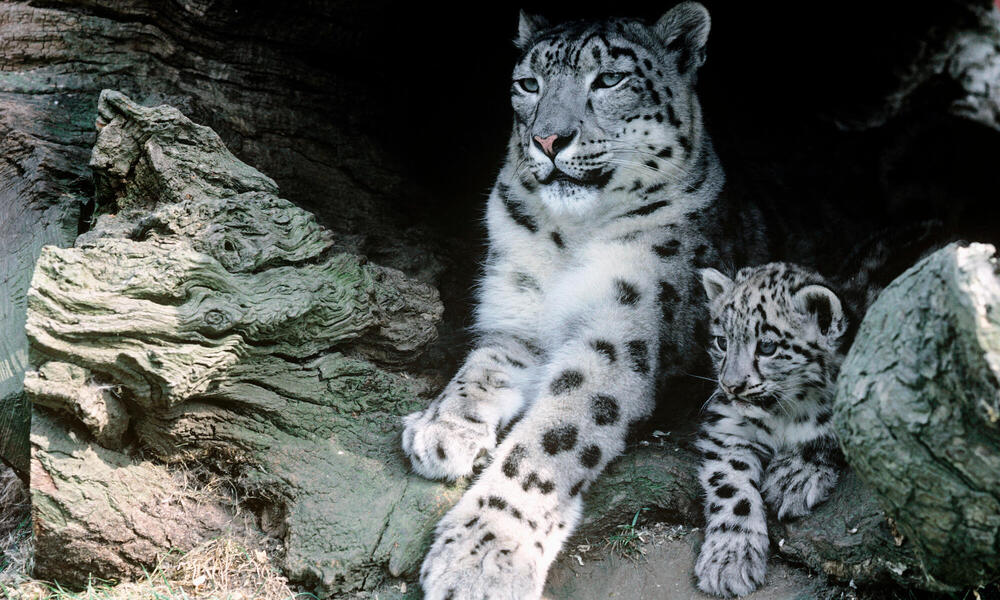 5. How big are snow leopard litters?

Snow leopards have litters of one to five cubs, but litters are most commonly two to three. The cubs are blind at birth, but already have thick coats. Their eyes open about seven days after they are born, and they are dependent on their mother for at least the next year.

Unlike other large cats, snow leopards cannot roar. They can mew, growl, yowl and prusten. Prusten, also referred to as chuffing, is a non-threatening vocalization made by blowing through their nose while their mouth is closed. 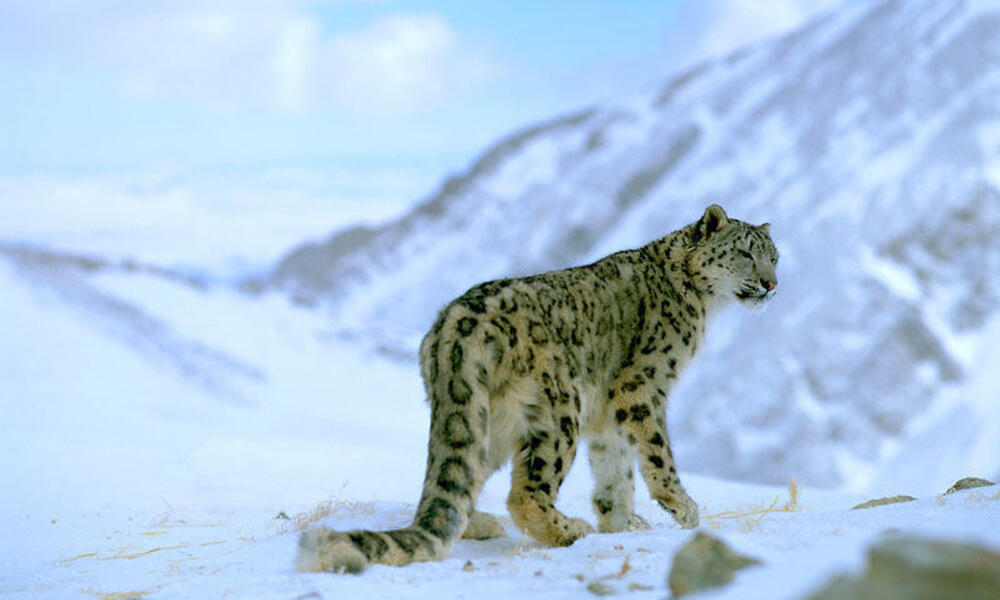 7. What do snow leopards eat?

Snow leopards are capable of killing prey up to three times their own weight. They eat blue sheep, Argali wild sheep, ibex, marmots, pikas, deer and other small mammals. The animals which snow leopards typically hunt—such as the Argali sheep—are also hunted by local communities. As their natural prey becomes harder to find, snow leopards are often forced to kill livestock for survival, in many cases leading to retaliatory killings of snow leopards by local farmers or herders.

8. What are the biggest threats to snow leopards? 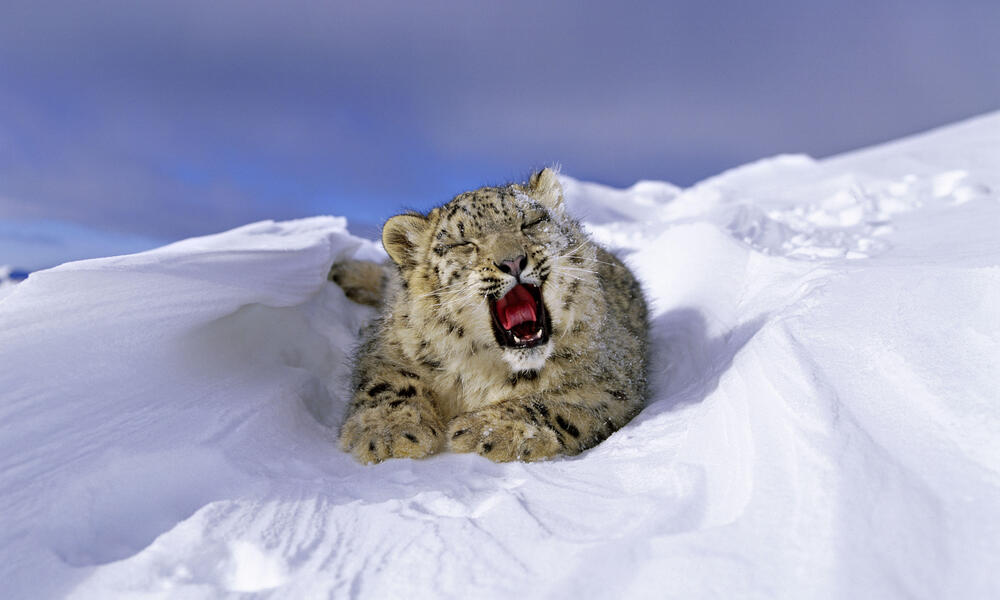 9. Why are snow leopards important?

Snow leopards play a key role as both top predator and as an indicator of the health of their high-altitude habitat. If snow leopards thrive, so will countless other species.

10. What is WWF doing to protect snow leopards?