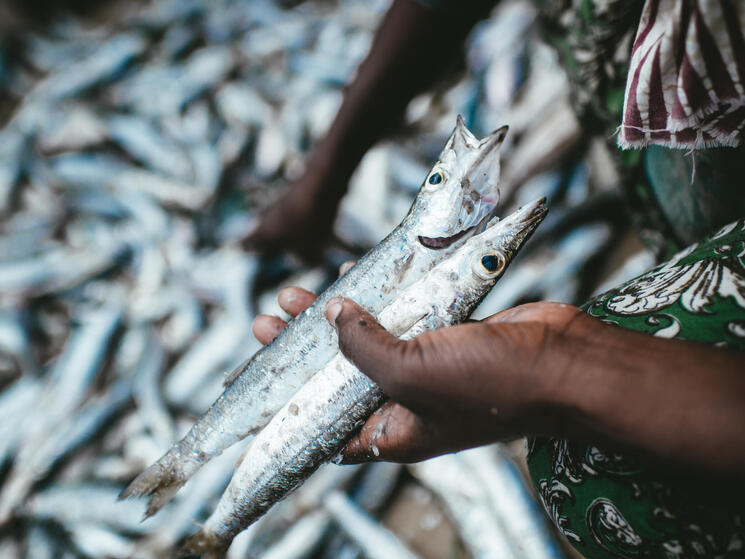 One of the biggest threats to the ocean is unsustainable fishing. When done right fishing can benefit people while maintaining balance in nature. But when fishing practices take too heavy a toll on the marine environment, wildlife populations and critical habitats decline, which jeopardizes jobs and a critical food supply.

Fishery improvement projects—called FIPs—are the most widely-used approach for raising standards in fisheries around the world so that species, habitats, and people can all thrive. WWF helped pioneer the approach more than a decade ago and today FIPs account for nearly one in every ten pounds of fish caught worldwide.

After more than a decade of leveraging seafood buying power to catalyze these improvements in fisheries, we now have a good idea of what is working and what parts of the approach need to be improved. There’s never been more incentive to get it right—and fast.

The fishing industry is a major source of food and jobs. More than 260 million people help keep the sector running with nearly one third of the world’s population relying on that seafood as a primary source of protein. Not all of the seafood we eat is sustainable, which means there’s plenty of work to do.

Even though there are a patchwork of conservation approaches needed to protect fish stocks, an individual fishery can identify the best path forward through a FIP, which details what a fishery needs to do to meet the most rigorous standards for assessing environmental sustainability. The work draws together fishers, industry, researchers, government, and NGOs, channeling the collective energy and resources of the group to help a fishery meet the requirements of the Marine Stewardship Council (MSC) standard.

The 2020 Global Landscape Review of Fishery Improvement Projects (FIPs) done by California Environmental Associates (CEA) found the FIP model to be a successful tool for improving fisheries, but outcomes on the water have been slower than anticipated. The five-year timeline most of us envisioned for a FIP to reach its conclusion is probably too optimistic moving forward. It will likely take at least 10 years since we are working in more challenging fisheries, many of which are small-scale and taking place in countries with limited resources to accelerate improvements.

In some instances, progress is and will remain slow because of local political dynamics. There are fisheries where work slowed significantly because government agencies had competing management priorities, or for some other reason didn’t align with other fishery stakeholders. In Ecuador, the government engaged from the very beginning in a mahi mahi fishery improvement project. The collaboration proved so effective that the FIP plan became the government’s National Action Plan.

In other cases, governments lack the tools to monitor what is happening in a fishery, and that impacts authorities’ ability to enforce compliance with rules.

The biggest challenges holding back fishery improvement projects also hold the key to amplifying the impact of what’s working. Nearly 10% of the wild caught fish we eat comes from a vessel actively seeking to improve practices, and that number is only expected to grow in large part because the market-driven FIP model of conservation is highly scalable.

In its analysis, CEA suggests that rather than creating many individual fishery by fishery projects, strategically rolling up effort across all FIPs within a country to collectively lobby national governments to make improvements benefiting all fisheries management is the clearest way to scale FIP impact. This type of effort is complex and requires significant coordination to pull off, but the limited resources available can be directed toward efforts that generate bigger impact. WWF has taken a regional approach to tuna fishing for years, and we’re working to scale-up to national FIPs in places like Chile where important forage fisheries bring together stakeholders from all sectors.

The clear takeaway on FIPs in 2020 is that they work but could be even more effective, and industry leadership can go a long way toward achieving a successful outcome in more fisheries.

As the world comes together to consider what it means to build an economy of the future, it has never been more important for the fishing and seafood industries to make clear that smart fishing is smart business, and a healthy ocean provides for us all. So that no matter what the seafood business of tomorrow looks like, environmental sustainability is still at its core.