What is a pangolin?

Everything you wanted to know about this scaly mammal 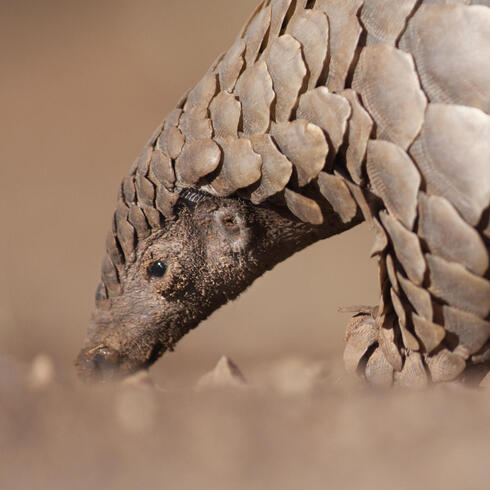 1. What is a pangolin, really?

Though many think of them as reptiles, pangolins are actually mammals. They are the only mammals wholly-covered in scales and they use those scales to protect themselves from predators in the wild. If under threat, a pangolin will immediately curl into a tight ball and will use their sharp-scaled tails to defend themselves.

2. What do pangolins eat?

Pangolins eat ants, termites and larvae and are often known as "the scaly anteater." Because they have no teeth, pangolins pick up food with their sticky tongues, which can sometimes reach lengths greater than the animal’s body.

3. The most trafficked mammal in the world?

They certainly are one of the most trafficked mammals in Asia and, increasingly, Africa. Pangolins are in high demand in countries like China and Vietnam. Their meat is considered a delicacy and pangolin scales are used in traditional medicine and folk remedies. All eight pangolin species are protected under national and international laws. But there is still growing international illegal trade in pangolins.

Based on reported seizures between 2011 and 2013, an estimated 116,990-233,980 pangolins were killed, which represents only the tip of the trade. Experts believe that seizures represent as little as 10 percent of the actual volume in pangolins in illegal wildlife trade.

4. Is there any good news for pangolins?

Yes! In 2016, a treaty of over 180 governments announced an agreement that would end all legal trade of pangolins and further protect the species from extinction. However, illegal trade of the species continues. WWF, together with TRAFFIC, works to protect species from wildlife crime. In Asia, we work to reduce consumer demand for illegal wildlife products with campaigns and partnerships with governments and businesses.

In June 2020, China increased protection for the native Chinese Pangolin (Manis pentadactyla) to the highest level, which closed an important loophole for consumption of the species in-country. Additionally, the government will no longer allow the use of pangolin scales in traditional medicine, a big win given that an estimated 195,000 pangolins were trafficked in 2019 for their scales alone (Challender, et. al, 2020).

5. What can I do to help pangolins?

Wildlife crime is the greatest threat to pangolin, so you can join our Stop Wildlife Crime campaign and pledge to help threatened species including the pangolin.

Make a symbolic pangolin adoption to help save some of the world's most endangered animals from extinction and support WWF's conservation efforts.