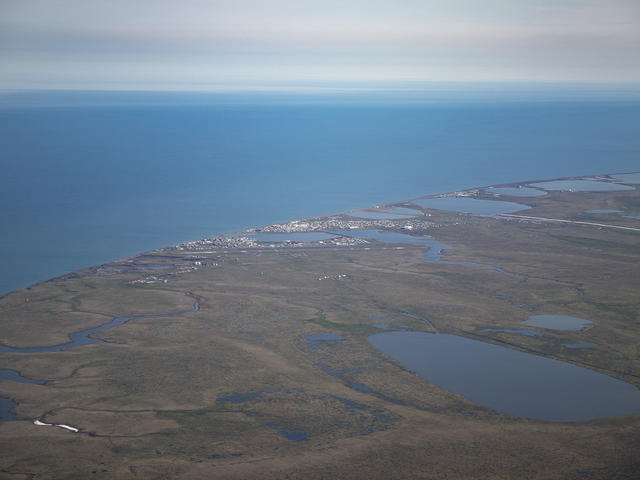 Nearly all angles of Alaska are magnificent no matter the season. But every single snapshot fails to capture a shared and uneasy feeling that this warmth is more than Alaska should enjoy.

Today, climate change is altering how and where people live, travel, and eat. Animals migrate and behave differently, while some populations of wildlife struggle to adapt and survive. The warm months are getting longer, while the cold months are getting shorter. According to locals, things are trending more wet than frozen.

The signs of change are everywhere.

A close look at the coastline reveals thawing permafrost oozing over the snow along the Chukchi Sea. The Arctic is warming twice as fast—and quite possibly faster—than any other place on the planet.

In Alaska, July went down as the warmest in history while summer sea ice reached its second lowest of all-time, leaving communities, coastlines and wildlife exposed—and not just here.

Disappearing sea ice and melting glaciers can trigger flooding and sea level rise from America’s Arctic to Miami and beyond. According to scientists, things are getting worse—faster than predicted—putting people, wildlife, and nature at risk.

While the nature and people of Alaska are being forced to live with irreversible change, the world still has the chance to slow it down and avoid the most extreme projections. But only if we act with urgency, and with local communities needs in mind.

“You can't build a wall against this tide because the ocean will just take it."- Adrianne Christensen, Port Heiden, Alaska 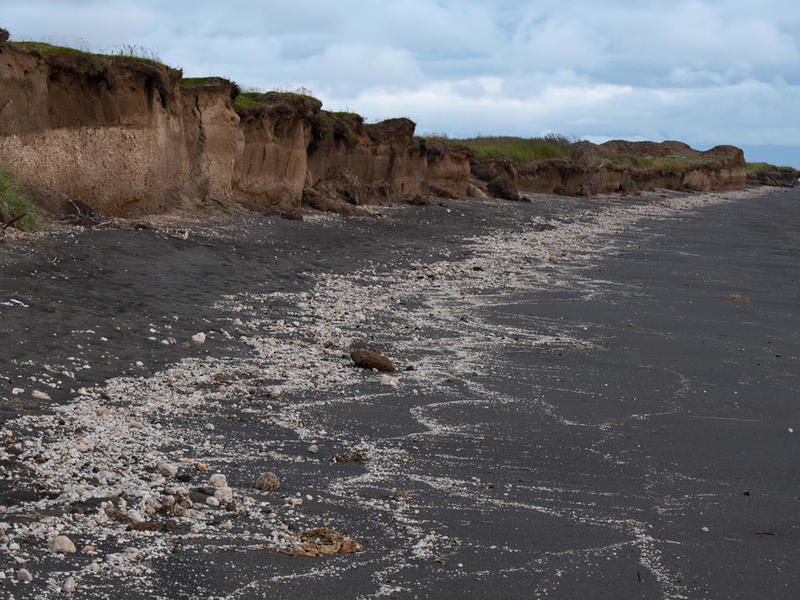 As sea ice retreats, Alaska’s coastline is exposed to strong waves during storms. As climate change increases the frequency and severity of storms, it accelerates coastal erosion.

In the north, this problem is made worse by thawing permafrost, which makes it harder to travel and hunt, and even complicates how researchers get into the field and do science.

Meantime, the entire world is caught in a feedback loop. As permafrost thaws, it releases gases like carbon and methane, which further fuels global warming.

Taking action for their future

“When I was little after school, with my gram, we’d go berry picking. We’d get big buckets. We don’t go berry picking like that anymore.”- Lillionna Kosbruk, 20, farmer in Port Heiden, Alaska

Port Heiden sits on Bristol Bay more than 400 miles southwest of Anchorage on the Alaska Pennisula. The population of this remote native village fluctuates around 100 people. While situated just south of the Arctic Circle, Port Heiden is directly impacted by what happens further north.

The loss of ice, strong storms and higher sea levels in Bristol Bay is stealing shoreline from Port Heiden with some locations losing upwards of 80 feet every year. The coast is largely comprised of pumice—a reminder of the nearby dormant volcano—and it erodes easily.

Beginning in the late 1980s, the community began moving the entire village inland, building by building. The last person remaining in the old village moved out in 2008.

“How many people can say ‘where I grew up no longer exists?’,” asks Gerda Kosbruk.

One of the old houses now sits near the village offices while the search for a permanent home continues.

“My mom was born in that house,” Kosbruk (right) adds. She’s the village administrator for Port Heiden, a position her mother Annie Christensen (middle) held previously.

“When we were all down there, everyone would visit,” Annie remembers of the old village. “Now, some people I don’t see for a couple months at a time. Back then it was a shorter walk to go visit somebody. Back then it was quite different.”

Today homes are more spread out across town thanks to miles of old military roads. And while the erosion no longer threatens homes, the entire community still feels the effects of a changing climate every day around the kitchen table.

“So we used to be able to get all of our food sourced locally here through berry picking, hunting, fishing and gathering,” said Adrianne Christensen. She grew up in Port Heiden and now works for the village.

Nearly one thousand miles north of Port Heiden, the city of Utqiaġvik—formerly known as Barrow—is home to nearly 4,500 people. This July, Utqiaġvik’s coast was sea-ice free. Disappearing ice threatens to further erode what little shoreline stands between the ocean and the city’s main infrastructure.

Utqiaġvik’s coastline is eroding faster today than ever before. The rate of erosion over the past two decades is twice that of the period between 1955 and 1979. A wall of fortified sandbags, along with gravel and rocks, went up two years ago to protect the city’, and the temporary fix is already showing signs of weakness.

“When the ice had a presence it dampened the wave action, right? It crashed on the ice,” says Harry Brower, Jr., a lifelong resident of Utqiaġvik and current mayor of Alaska’s North Slope Borough. But without that ice presence, now the wave action is coming all the way to the beach and causing coastal erosion, and flood stages are very noticeable today.”

"[Climate change] means loss of culture, loss of the land and loss of the people that have called the arctic home for the past thousands of years."- Eben W. Hopson, 19, filmmaker and photographer in Utqiaġvik, Alaska

“Our food system is changing, we’re not as healthy, we’re having to do all of these different things for the same basic nutrition.”- Adrianne Christensen, 36, village staff in Port Heiden, Alaska

“Climate change to me means a change to how we live. Because we can’t really fight it. It’s happening.” - Lillionna Kosbruk, 20, farmer in Port Heiden, Alaska

Communities in Alaska are resilient, in large part because adapting to change has always been a means of survival. But change is happening faster than any time in recorded history, faster than any one community can handle on its own.

While Alaska is undeniably warmer, it will never be confused with the tropics—it’s Snowy owls atop the tundra, not monkeys on mangrove branches. And unlike the tropics, where coastal ecosystems like coral reefs can provide natural infrastructure to buffer the impacts of rising sea levels, erosion and increasingly dangerous storms, there are few options for adapting in Alaska.

“Unfortunately they’re in locations that are difficult to defend,” says Dr. Davin Holen, a Coastal Community Resilience Specialist with Alaska Sea Grant and Assistant Professor at the University of Alaska Fairbanks.

Dr. Holen concedes that the only real options are to shore up coastlines with gravel or sea walls, which won’t work everywhere, or relocate altogether. But there are still ways for communities to adapt to the changing world around them.

“When plans are made locally, people are better able to identify and speak to the importance of the relationships with the landscapes and create plans that maintain those relationships. And that's a very important component of resiliency,” says Erica Lujan with the Alaska Native Health Consortium. She worked with Port Heiden to integrate climate adaptation into community planning.

As the traditional subsistence lifestyle changes in Port Heiden, the village is focused on growing its farming. The Meshik Farm—named after the former village—raises chickens, turkeys, ducks, geese, rabbits, pigs and a cow. The vision is for farming to provide more food security and improve physical and financial health for the village.

As part of its community planning, Port Heiden residents looked for opportunities beyond farming. One such possibility would come if the sliver of coastline between Goldfish Lake and Bristol Bay eroded completely, there’s only a few feet left. When it gives way, the village might once again get a safe harbor for its boats, something that could allow Port Heiden to become a hub on the peninsula, something some residents have wanted to explore. 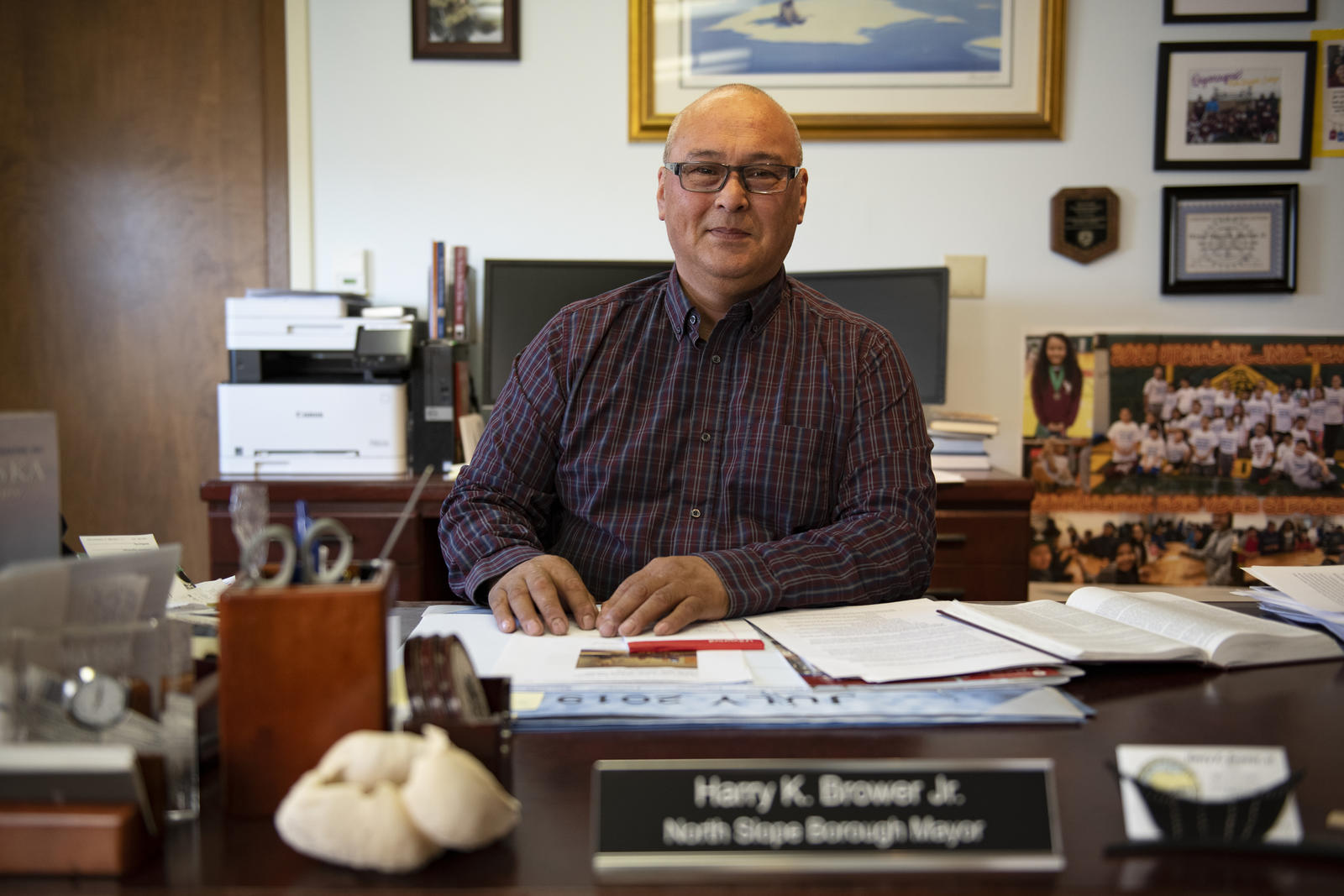 “If we were the old state of Barrow and took the word of our elders to just move, it would have been possible,” Mayor Harry K. Brower, Jr. said. “But we have infrastructure and things that we can’t just pick up and move to save and use again.”

No community left behind

While the entire world must work toward limiting warming by reducing emissions and transitioning to renewables, people in Alaska are looking for leaders to simply listen and then make decisions with their stories—and climate change—top of mind.

“Most of our government is sitting in cities and they have no idea what it's like to be out here in the remoteness of here. I don't even know if they wanna even know. And so they don't know and they make decisions on my behalf,” concedes Port Heiden Village Amdinsitrator Gerda Kosbruk.

Smart government decision-making and access to information can open a more accessible pathway toward building community-wide resilience. In places like Bristol Bay, that means declining to move forward with new development that threatens natural resources in favor of sustainable development plans that allow people and nature to survive.

The salmon industry is the lifeblood of Port Heiden and countless other communities. Proposed mining in the headwaters of Bristol Bay would increase the stress on salmon populations, which impacts brown bears and other species throughout the watershed. A recent study found that the tourists who visit and go on guided tours to spot bears in Southcentral Alaska generated $34.5 million dollars in 2017.

If Port Heiden is able to grow its farming and build a safe harbor, it could achieve another goal of growing its economy through tourism. It’s perfectly placed to become a stop for tourists hiking Aniakchak National Monument.

But when government rule-making doesn’t keep up with the change his community is experiencing, it's hard to build resilience.

“The resource availability and access to the resources, that’s becoming more difficult because of the climate that we’re dealing with,” he adds.

As the people of Utqiaġvik and neighboring communities adapt to historic heat, wildlife is adapting too. Sea ice declines bring more bears to rest along Arctic coastlines, endangering people and polar bears. Reducing human-wildlife conflict is an important way to protect the community as well as polar bear populations.

Commercial development and investment in the Arctic is also increasing, and there are steps that governments and business can take to ensure exploitation doesn’t come at the expense of people and nature. The report Getting it right in a new ocean offers guidance on how sustainability can be achieved at this pivotal moment for the Arctic.

Resilient communities in Alaska are communities that can continue to take care of nature on land and at sea. Throughout the region, as difficult as things may get, many community leaders express confidence that their people will pull through.

Gerda Kosbruk is also bullish on bringing along those who remain unconvinced by the science of climate change.

“You have to hope,” she says. “It's kind of like having somebody who has a bad habit in your life and you look at 'em and you think it's hopeless, but I've seen people change. I hope every day that they change and I—you know, we—what do we do? We do our best to help them.”

The time to act is now

Coastal erosion is just one impact of the climate crisis. More frequent and extreme storms, droughts, heat waves, increased flood risk, and more will impact people, wildlife, and wild places everywhere. It’s up to all of us to change course immediately. Here’s how you can help:

Pledge to cut your carbon footprint

Learn more about our melting cryosphere