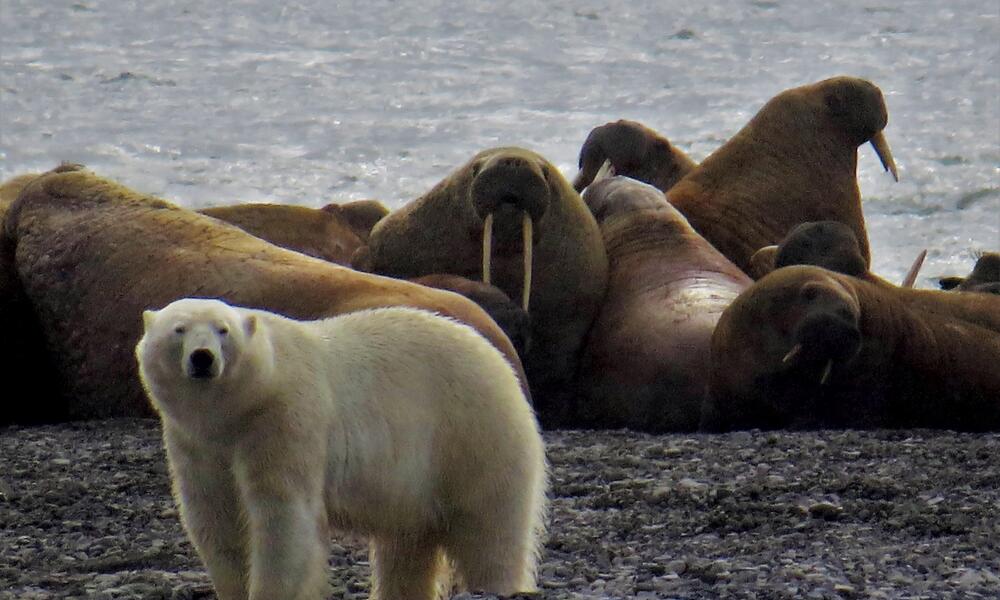 Every autumn for about the last decade, the residents of Enurmino—a tiny, Russian village located along the Chukchi Sea—have witnessed a strange sight. Tens of thousands of Pacific walruses have exited the chilly ocean waters and assembled en masse along the shoreline.

This phenomenon, known as a “haulout,” occurs when large hordes of mostly females and calves pull themselves onto the beach to rest. The walruses climb on to shore because of declining sea ice cover.

“Typically, walruses spend most of their time at sea hauled out on ice floes as they forage for food on the ocean floor” explains WWF’s Nikhil Advani, “but as sea ice declines, they’re increasingly hauling out on land instead.” 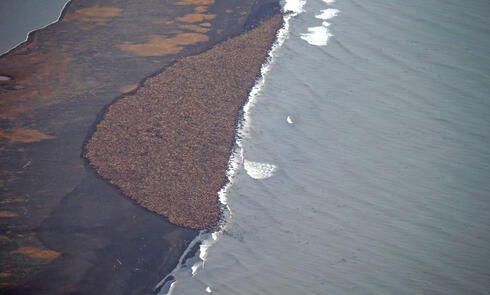 In September 2014, NOAA aerial surveys captured this image of an estimated 35,000 walrus hauled out along the shore near Point Lay, Alaska.

Throughout the Arctic, sea ice is forming later in the season and disappearing earlier, limiting the amount of space available for walruses to congregate. Floating summer sea ice is also receding further north to where the water is too deep for the animals to dive and feed. This forces them to desert the ice and seek refuge ashore. Once on land, the walruses must travel much longer distances—up to 250 miles round trip—to reach their food supply.

Researchers first observed large haulouts off Alaska’s Point Lay in 2007, when summer Arctic sea ice reached its second-lowest minimum extent in recorded history. As the extent of summer sea ice has continued to decline in Arctic waters, the number of walruses coming ashore has grown considerably.

These massive haulouts can be incredibly dangerous for walruses. The crowded animals are easily spooked; any sound or scent—an airplane flying by, a human, or a whiff of a predator—can cause a deadly stampede. In their rush to the ocean, the heavy walruses—which can weigh up to 1.5 tons—can trample other walruses, especially young calves, which are susceptible to injuries and death. Last year, disturbances to a haulout near Cape Schmidt, Russia caused more than 500 deaths.

In addition to posing risks for individual animals, these mass aggregations are a troubling sign that Pacific walruses and other species are under serious threat from climate change-driven habitat loss. “Some projections suggest that the Arctic could be ice-free in the summers as early as 2040,” says Advani. “That means sea ice-dependent species like walruses and polar bears will be spending more time on land, which could decrease access to their prey base and increase human-wildlife conflict.”

In coastal Russia, WWF is actively working with local communities to protect migrating walruses—which are economically and culturally significant for native populations—to help the species adapt to its rapidly changing habitat. In particular, WWF engages residents to establish strict no-fly zones and limit access to haulout areas, reducing the risk of harmful disturbances.

With support from WWF’s Wildlife Adaptation Innovation Fund, researchers are also collaborating with the residents of Enurmino to create artificial feeding spots along polar bear routes. Since 2017, we’ve worked with local villagers to relocate walruses that have died of natural causes from the beach to known polar bear feeding areas along the Chukotka coast, which helps to keep polar bears and other predators away from the walrus nesting grounds.

Research suggests that because of these interventions, there’s been a significant decline in polar bear disturbances to haulouts and human-polar bear conflict near Enurmino. That success has inspired residents in Ryrkaypiy and Vankarem—two other villages located near haulout areas—to undertake similar projects next year.

Still, the future remains tenuous for the Pacific walrus and countless other Arctic species. If urgent action isn’t taken to limit the worst impacts of climate change, the loss of sea ice will put increasing strain on vulnerable populations.