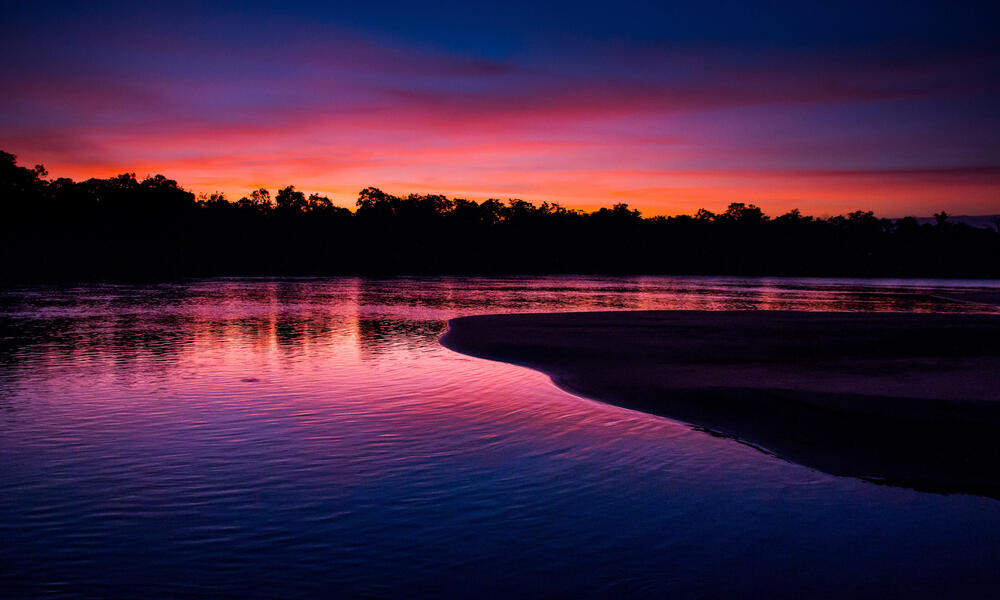 In a major triumph for freshwater conservation, Colombia’s Bita River basin was recently announced by President Juan Manuel Santos as a Wetland of International Importance under the Ramsar Convention—an intergovernmental treaty that that provides the framework for the conservation and sustainable use of wetlands. This decree spans 824,500 hectares, establishing the river basin as the largest of the country’s 11 Ramsar sites and one of very few protected sites in the world to encompass an entire free-flowing river watershed.

Running unimpeded for more than 372 miles before flowing into the Orinoco River, the Bita River is a treasure trove of biodiversity. It harbors at least 1,474 species of plants, 254 fish species, 201 bird species, and 63 species of mammals—from tapirs to deer and jaguars—and its extensive freshwater habitats and gallery forest ecosystems are home to iconic species such as river dolphins, the blue arowana, and the charapa turtle.

It also supports local communities who rely on the river for everything from fishing to tourism to survive.

The historic protection of the river is the result of joint efforts by WWF-Colombia and the Alliance for the Bita, comprised of the Omacha Foundation, the von Humboldt Institute, Vichada Provincial Government, the Ministry of the Environment and Sustainable Development, and other partners. The Alliance has been working with citizens and the government in recent years to define a sustainable future for the Bita River. After years of studies and consultations, stakeholders agreed to give the river a protected status that would allow for sustainable use, ensuring that the river’s incredible biodiversity—and the important ecological processes on which its survival hinges—are safeguarded in the long term.

“The designation means that a vast wealth of species along the Bita River will be protected with support from local inhabitants and institutions,” said WWF-Colombia freshwater specialist Saulo Usma. “Critical wetland complexes, such as floodable savannah, drainage channels, and miriti palm ecosystems—which are home to a wide variety of fish—will be conserved. These are a vital source of income for local inhabitants.”

Securing the Bita River is not only critical for protecting its biodiversity. As a free-flowing river—a river that’s largely unaffected by human-made changes to its flow and connectivity—it’s a rare example of a watershed that’s been minimally affected by deforestation and human development.

Around the globe, rivers are under assault from pollution, floods, droughts, dams, and more. Today, an estimated 60,000 large dams (dams that can generate one megawatt of power or more) have been erected on more than half of the planet's major rivers. Because of these threats, our rivers are losing life rapidly; since 1970, freshwater species populations have declined by 81%—twice as fast as the decline of marine or terrestrial species.

Remarkably, more than 95% of the Bita River’s watershed is still intact. And thanks to the commitments of the Colombian government and its partners to safeguard the country’s rivers and freshwater resources, it’s likely to remain that way.

“The Bita River’s ecological health has set the standard that other Colombian rivers should aim for,” said Director of WWF-Colombia Mary Lou Higgins. “This is a big step for the protection of the Bita River and for the concepts of conservation and sustainable development in the Orinoco region.”

Learn more about free-flowing rivers and how WWF is working to protect them.