Why Pebble Mine infrastructure would be a disaster for wildlife 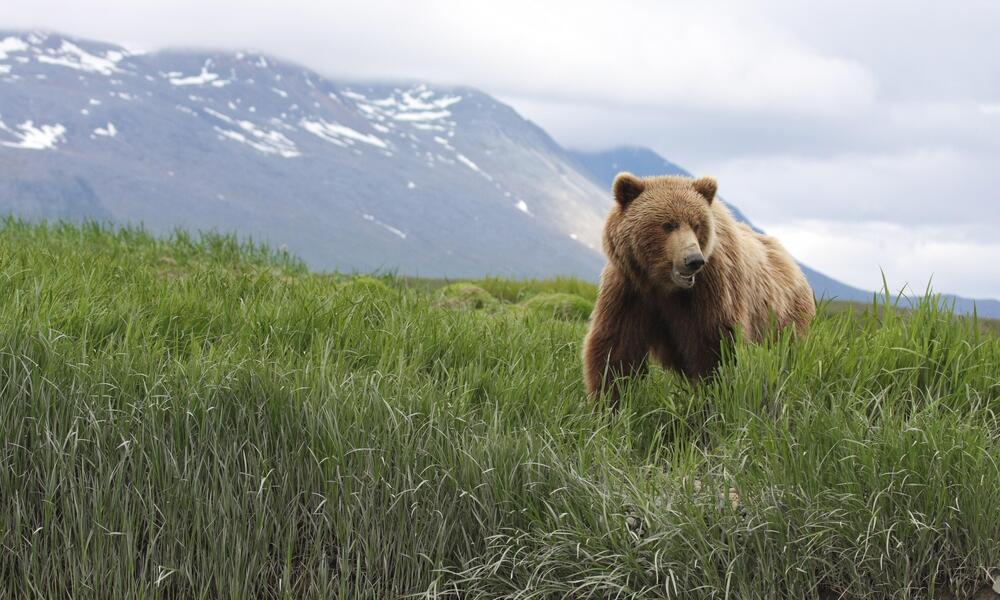 Brown bears in Alaska’s Bristol Bay region spend each year roaming the largely unspoiled land found between the coast and massive mountain-lined national parks and reserves. Standing up to a foot taller than the average human, and weighing as much as a grand piano, these bears are some of the most iconic wildlife species found in America’s great outdoors. In other parts of North America they’re called grizzly bears.

Brown bears are not listed as an endangered species—in fact, some populations are doing quite well—but in Southwest Alaska, they face an impending threat from the proposed development of an open-pit gold and copper mine.

“Bears are large creatures who need large spaces to be able to survive,” said Drew Hamilton, an  Alaska-based expedition leader with Natural Habitat Adventures who has spent more than a decade observing and photographing Alaska’s bears.

“The plans for this mine will put up barriers to movement and threaten the primary food source for brown bears—salmon.”

The potential for increased human-wildlife interaction if Pebble Mine moves forward puts both people and animals in danger.

Mine plans call for a port to help haul the gold and copper to market. Pebble Limited Partnership’s preferred route for a transportation corridor and saltwater port facility lies within sight of McNeil River State Game Sanctuary which protects the world’s largest seasonal congregation of brown bears.

“There’s so many reasons putting a port here is a bad idea,” Hamilton, the expedition leader, said. “The basic premise of the bear viewing industry is that humans come into the bears’ habitat and behave in a very specific way, predictable to the bears. When you’ve got a whole complex in the middle of prime bear-viewing area, the way the workers and truck drivers interact with these animals is pretty much the opposite.”

And with people comes food. Brown bears are always on the hunt.

“A food conditioned bear is a very dangerous animal. It now associates humans with food and if such a thing were to happen it would diminish the safety of the viewers.”

Bristol Bay’s brown bears spend winters hibernating in dens until emerging in springtime to graze on the region’s fresh flowers and plants, along with any appealing dead wildlife found along the way. In the summer season, salmon are a brown bear’s food of choice—and just as favored by consumers who support a $1.5 billion commercial salmon industry.

Building a big mine upstream has real potential to impact everything downstream. And what’s downstream from the proposed Pebble Mine is everything that makes up Bristol Bay. There has been bi-partisan, diverse community-led opposition to the Pebble Mine project for two decades.

Still, developers want to dig a mine one-mile-wide and quarter-mile deep. Carving out Pebble Mine would lead to the destruction of 3,000 acres of wetlands and more than 21 miles of salmon streams. The scar on Alaska’s pristine, productive environment would be visible from space.

“Where the mine plan truly hurts bears is the infrastructure associated with the mine. The proposed road corridor and the power plant would sit squarely in the middle of a route that bears use to move up and down the western shores of Cook Inlet. Development would also get in the way of the route many bears use to get across the mountains as they migrate to match seasonal fish abundance,” says Hamilton. “Any assault on salmon is an assault on bears and Alaskans.“

Bristol Bay boasts the world's largest wild salmon fishery. But what that really means is the region is home to an abundance of biodiversity. In an age of climate change and pressure to develop, it’s vital we protect these wild places.

Locals and visitors regularly spot beluga whales, humpback whales, caribou, brown bears, and moose, not to mention trees, flowers and plants of all types. Pebble Mine exposes the entire biome to a potentially toxic, uncertain future.

The US government put the permitting process on a fast-track, working even during a government shutdown. The administration released a rushed and incomplete draft environmental impact review of the plans, which is now open to public comments and review.

“The time to stop this is now,” Hamilton concluded.

Take action: Tell the Administration that Pebble Mine is too risky for the region’s brown bears, salmon and people.