In the Arctic, places once protected are now exposed 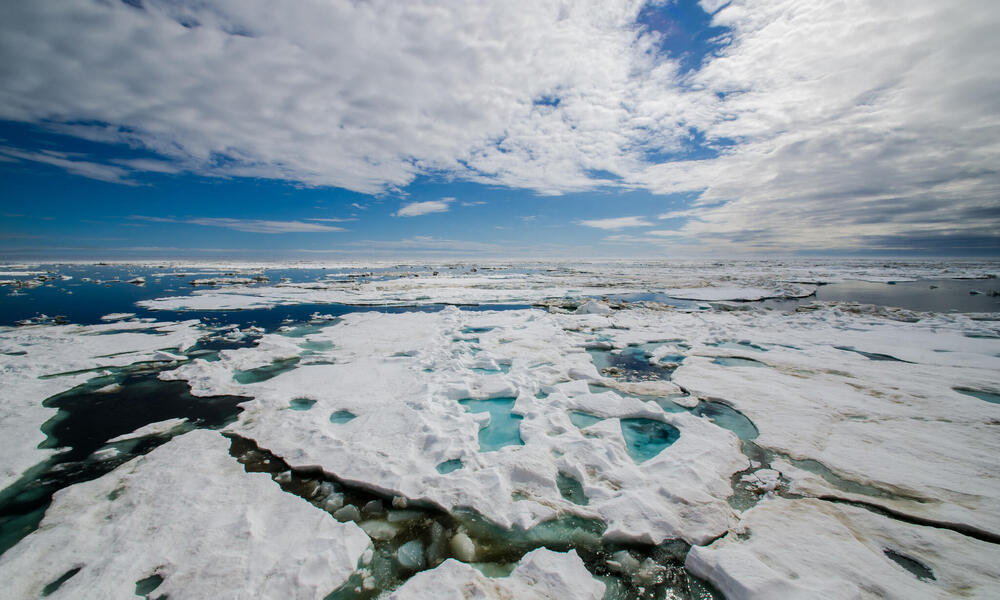 A decade after the worst oil spill in US history, the federal government is attempting to revoke broad protections that prevent offshore oil and gas development in the Arctic, and the future of these places remains in legal limbo. Additionally, longer ice-free periods in northern waters have led to a dramatic increase in commercial shipping, which increases the risk of oil spills.

In the Chukchi Sea, Beaufort Sea, and Bering Strait region, shallow waters provide feeding and calving areas for numerous species of marine mammals, including, bowhead whales, beluga whales, fin whales, humpback whales, gray whales, walrus, and ice-dependent seals. Polar bears travel freely throughout the area, mostly sticking to the pack ice but sometimes denning on shore. Estuaries and lagoons along the Chukchi, Beaufort, and Bering seacoasts support huge numbers of migratory and resident seabirds, shorebirds, and waterfowl, including yellow-billed and red-throated loons, brant geese, and common, spectacled, and king eiders. Thousands of Iñupiaq, Central Yup’ik, Siberian Yup’ik, and Chukchi people reside in the region as well, and their traditional culture and way of life depend on the bounty of the sea.

To protect these climate-stressed ecosystems from the added pressures associated with industrial oil and gas development, President Obama blocked new oil and gas drilling in nearly all of the Chukchi Sea and Beaufort Sea areas. He also designated a 72 million-acre area off the west coast of Alaska as the Northern Bering Sea Climate Resilience Area, established a related Task Force, and protected a large portion of it from oil and gas. Today these ecologically important places in the Arctic are at risk of losing their protected status and being made available for large-scale oil and gas development.

A bald eagle flies over the Bering Sea

In 2017, President Trump issued an executive order revoking the rules that prohibited offshore oil leasing in the Chukchi and Beaufort seas. The Trump administration also revoked the designation of the Northern Bering Sea Climate Resilience Area, including the protection it offered from oil and gas leasing. Both cases are now under review in the court system. Regardless of the litigation, the larger Northern Bering Sea Climate Resilience Area and its associated Task Force will remain defunct unless a future administration reinstates them.

The combined effect of these rollbacks is a dramatic decline in the security of America’s Arctic for both people and nature. While bringing back smart rules and area protections throughout the Arctic should be a priority, these measures will not be enough. As the Arctic gets more crowded, with ships favoring the shorter Northern Sea Route between Europe and Asia, places that are so crucial for Arctic biodiversity, such as the Bering Strait—and the people who live there—are increasingly at risk.

Given the dramatic impacts of climate change already felt in the region, it is more important than ever to protect against the threat of oil spills, including shipping accidents that have the potential for disaster. While the most important policy is preventing oil spills in the first places, oil spill preparedness and response requirements, training and communication capabilities for local responders, and the necessary funding to carry out these and other measures are essential for this remote region.

A major challenge to oil spill response capacity in the Arctic is limited maritime infrastructure. The closest US Coast Guard station is a thousand miles away in Dutch Harbor in the Aleutian Islands. As the area gets busier with more traffic, and possibly an expanded, deeper port in Nome, emergency prevention and response measures must be heightened. The federal government should also consider instituting a Coast Guard presence through a vessel traffic service (similar to air traffic control) in the Bering Sea region, with a possible future expansion to other areas of the Arctic.

International cooperation will play an important role in protecting the Arctic as well. The US and Russia have successfully partnered to establish shipping routes and areas to be avoided (ATBAs) to protect key wildlife habitat and subsistence areas in the Northern Bering Sea region. Similar bilateral cooperation between the US, Russia, Canada, and the other Arctic nations will be immensely helpful in protecting the sensitive ecosystems and communities of the Arctic from the multiple threats they are facing.

Learn more about WWF's work in the Arctic