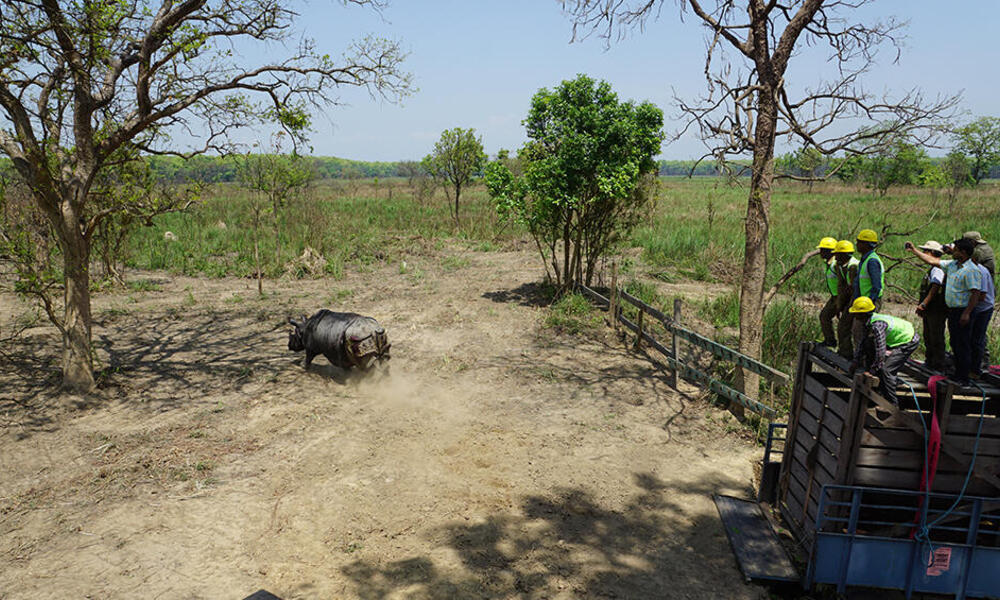 Four greater one-horned rhinos are adjusting to a new home in India’s Dudhwa National Park after they were successfully translocated from one part of the park to another during a five-day period in April. Dudhwa NP is located in WWF’s Terai Arc Landscape, which is transboundary with Nepal. The rhinos—each weighing between about 3,900–4,900 pounds—were moved from Kakraha in the South Sonaripur area of the park, where rhinos were first reintroduced 34 years ago, to Bhadi, within the park’s Belrayan range.

The landmark translocation was part of concerted efforts to expand the rhino population within Dudhwa NP. But the move was no modest endeavor. The process was a coordinated collaboration between the Uttar Pradesh Forest Department, Assam Forest Department, WWF-India, and the Wildlife Trust of India, and involved more than 200 people, including field staff, government officials, veterinarians, and rhino experts.

“The greater one-horned rhino is one of conservation’s greatest success stories. Considerable government conservation investment in range countries like India, along with the use of techniques like translocation to expand numbers, have enabled significant increases in rhino populations over the past century,” said Nilanga Jayasinghe, senior program officer for Asian species at WWF.

The rhinos were first selected and monitored for several months before a team of experts tracked and sedated them for translocation. The rhinos were then carefully loaded onto special trucks that transported to their new home range within Dudhwa NP, where they were released to form a new rhino population.

Dudhwa NP received its first group of rhinos in 1984, which included two males and three females that were moved from the northeast Indian state of Assam, home to the world’s largest population of greater one-horned rhinos. Four more females from Nepal were added the following year. By 2015, the park’s rhino population, which had been confined to Kakraha, had grown to 32.

Translocation programs help to re-establish viable populations in regions that once held rhinos by increasing their habitat and reducing the risk of inbreeding. Both range countries, India and Nepal, have been very successful in expanding greater one-horned rhino numbers from around 200 individuals at the turn of the 20th century to a total of around 3,500 today.

A growing rhino population in Dudhwa NP isn’t just good news for the species. It also benefits India’s larger Terai region, which is known as the country’s “food basket” for its robust agricultural production. Browsing rhinos keep savanna grasses trimmed, clearing the way for smaller mammals. They also spread seed through their dung, which enriches the soil and helps plants flourish. So when rhino numbers increase, other mammals, birds, insects, and fish also thrive.

“The relocation is an important milestone in rhino conservation,” said Ravi Singh, secretary general and CEO of WWF-India, “WWF-India looks forward to strengthening joint efforts for rhino conservation in the Terai Arc Landscape with the Uttar Pradesh Forest Department.”

Following their release, Dudhwa NP staff and the Uttar Pradesh Forest Department are now continuously monitoring the rhinos with help from WWF-India.