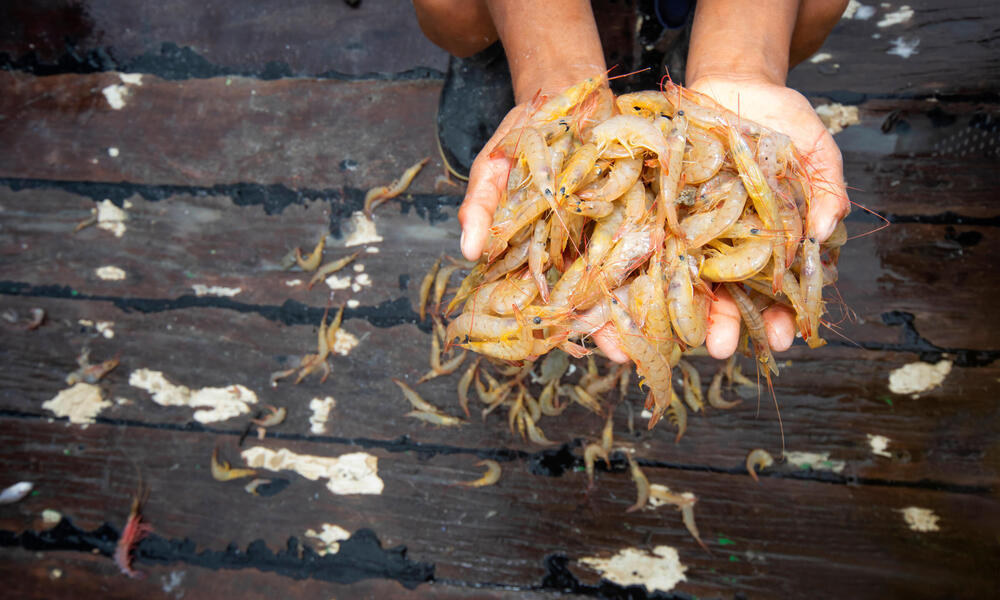 If you’re like me, you probably feel guilty about eating shrimp. After all, a lot of the shrimp we eat today come from shrimp farms in the tropics, where they have been responsible for the clearing of mangrove forests.

But on a recent trip to Ecuador, I learned about a small shrimp that has potential to be both good for the mangroves and for the local people that harvest it. Called the titi shrimp, it’s a little guy that you may have encountered at a Chinese restaurant, where they are often used in dishes like fried rice.

Underneath the surface of these zig-zagged wooden posts are a series of V-shaped nets, which funnel the titi shrimp into bolsos.

Julián Marcial Ponguillo is a leader of one of the mangrove communities that sets out these wooden posts and nets.

Titi shrimp, or pomada, are wild shrimp, native to Ecuador, and they are harvested around the Gulf of Guayaquil by both trawlers and artisanal fishermen using a unique kind of trap that doesn’t exist anywhere else in the world. WWF-Ecuador has been working with both the industrial and artisanal fishermen to try to reduce conflicts between the two groups and ensure that the fishery is sustainable.

On November 7th Ecuador announced that the fleet of pomada shrimp trawlers in the Gulf of Guayaquil will implement electronic logbooks at the express request of the fishing sector and based on the successful results of a pilot project with WWF.

The pomada shrimp fishing fleet is the first in Ecuador to use this technology to record data on fishing and catches. “Undoubtedly, an important milestone for the fisheries management of our country. We hope that the electronic logbook can also be used in other national fisheries, as well as in other countries of the region,” says Pablo Guerrero, fisheries director WWF-Ecuador.

WWF will provide technical advice to the Undersecretariat of Fisheries as well as the fishing sector during the initial phase of the official implementation of the electronic logbook.

With the industrial fishermen, for instance, WWF has introduced a system of electronic logbooks, so that captains can keep track of their catch histories and fishing efforts on cell phones and to timely self-report this information to managers, improving this way fisheries monitor and catch traceability.

As part of a model artisanal fishery, locals have erected a zig-zagging line of hundreds of wooden posts in a shallow finger of the Gulf known as Bajo Negro. Just beneath the water’s surface are a series of V-shaped nets, which funnel the shrimp into mesh bags, or bolsos, when the tidal waters rush past.

Julián Marcial Ponguillo, a leader of one of the mangrove communities that sets out these traps, says that they have been doing this for decades. Throughout these years, government attention has been scarce. Bajo Negro is a community of 1,000 people with dusty streets and crumbling buildings, and a lack of schools, electricity, running water, and flushing toilets. Every trip to buy groceries or harvest their catch puts them at risk of robbery in waters teeming with pirates. Yet when the government proposed relocating the community, they refused. The new location would be too far to ever catch shrimp or gather crabs from the mangrove forest they manage and protect. “They like the life here,” Marcial told me.

Although fisheries regulators have never tried to stop the fishermen from setting out their bags, the communities never had legal permission to sell their catch. In 2016, WWF launched a pilot project at Bajo Negro — one of 11 Bajos (“Shallows”) in the Gulf — to provide the government the data it would need to regulate the shrimp fishery and prove that the communities could do this on their own.

One concern raised by the owners of industrial trawlers has been that the bolseros were targeting juveniles and preventing them from reaching the deeper ocean waters. WWF helped create the first rules for the fishery, limiting the number of bags at Bajo Negro and requiring the fishery to close down for six months from November to April.

This year, the program was handed off to the government. About once a week, Rosa Garcia of Ecuador’s National Fisheries Institute receives information on the weight of the catch and the number of active bolsos. The bolseros also send her cellphone photos, showing bycatch in their net bags. So far, she says, both the bolseros and the industrial fishermen are catching shrimp of the same size. “I think they are doing it in a good way,” she says of the fishery.

Fisheries regulators are thinking about the replication of the same management scheme for the rest of the Bajos of Gulf of Guayaquil. Pablo Guerrero, Fisheries Director for WWF Ecuador and Latin America and the Caribbean, says “It’s not just a matter of conserving the stock, but the livelihoods of these people. Those people depend on the pomada and therefore, they are willing to cooperate with its good management and conservation."

And, in fact, the pomada — and other creatures in the Gulf — depend on the people. While we were out on the water with Marcial, he pointed towards a shrimp farm on the coast where illegal burning of the mangrove was taking place. He vowed to report them, as he always does.