It is not just people that need to be resilient to climate change–but also businesses and nature. When conservationists, communities and corporate water stewards work together it can make a difference. 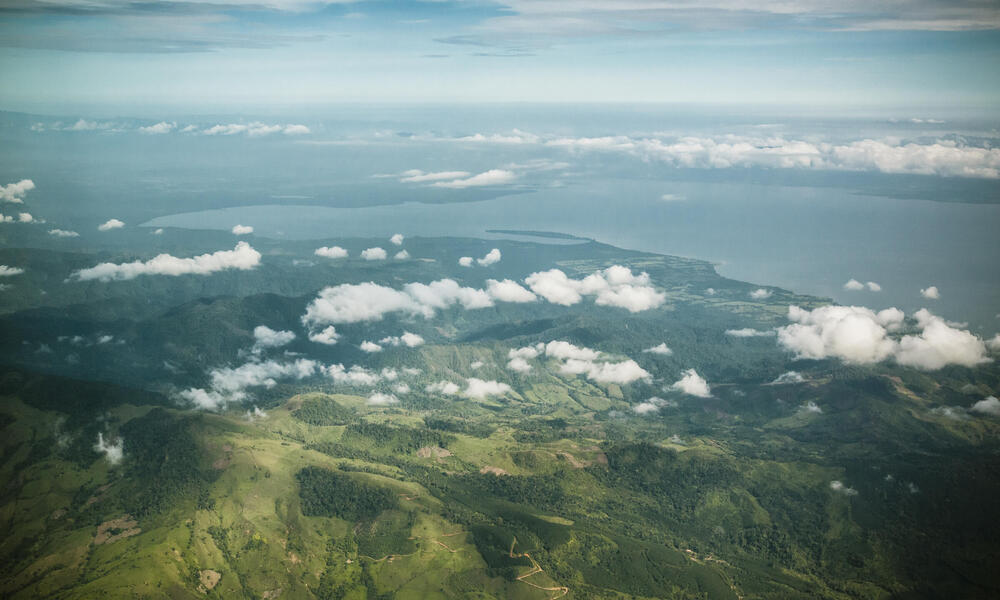 In Guatemala, thousands of people call the Teculutan and Pasabien watersheds home. Under the cover of iconic cloud forests, rivers flow down from the mountainous region called the Sierra de Las Minas; providing fresh water for nature and these communities, for drinking, hygiene and sanitation, agriculture, as well as for business operations and so much more.

Here the rivers should flow, and forests should thrive, nourishing the communities that surround them. But the impacts of climate change are taking their toll, with severe consequences. Droughts are more frequent and more severe. Forest fires are becoming uncontrollable. With increasingly irregular rainfall, crops are failing, and many are abandoning their farms altogether to pursue other livelihoods or decide to work on a bigger piece of land with the belief that cultivating more land will solve the problem, encroaching on areas that are not meant for farming.

The rural communities in the watershed rely on water from upstream sources for drinking water, which is often contaminated with mud from erosion caused by deforestation. Changes in the climate have contributed to increased water scarcity as well as heavy rainfall events, increasing runoff in the watershed, members of the community report that the rivers used to be crystal clear but now they are murky.

Back to the source

Despite the difficult situation in Guatemala all hope is not lost, and the future looks positive. This region has become an example of best practice when it comes to tackling water scarcity and ensuring the shared resource of water is managed and protected for current and future generations.

Over 10 years ago, working alongside the local communities, WWF-Guatemala/Mesoamerica and Fundacion Defensores de la Naturaleza (FDN) launched an initiative in Sierra de las Minas Biosphere Reserve to look at the way water was managed here, in specific sub-watersheds. The Coca-Cola Company System (HQ and bottlers) was one of the first participants in this initiative, investing in water sustainability.

The ongoing work in this region now takes a holistic approach to landscape and water management informed by climate information. By investing in climate-smart integrated plans for managing the watershed that includes forest firefighting, early warning systems, and other climate-smart projects, we are working towards building the resilience of the landscape to benefit people and nature. Nature is also going to help provide specific solutions here. Reforestation projects will be using native trees that are able to thrive in a warmer and drier climate in the watershed.

The worsening impacts of climate change are bringing new challenges with new solutions needed. Guatemala is an example of where it is necessary to go back to the source of the challenge and at the same time part of the solution, looking at the health of the overall watersheds. Because everything is connected here, from the cloud forests in the headwaters to the communities downstream, the way each of the stakeholders responds to climate change impacts everyone.

Communities at the core

The communities and people that live in this region are at the core of the progress we’re making here. Before the initiative started forests were being used intensively in the upper part of the watershed for fuel to cook and land was being cleared for subsistence farming and cattle ranching. This still happens but less every year, as communities have become engaged and empowered. As part of the work, communities were given energy-efficient stoves to reduce the need to burn wood from the forests, as well as given the opportunities to make a living from activities such as forest fires prevention and control and reforestation. Now the communities understand the importance of the water source for health and livelihoods and work alongside other the stakeholders to protect it.

Nixon Perdomo Pérez, a forest fire brigade member.
"I know that fighting forest fires is a risky job. I make a living from this yes, but it’s also my way of collaborating to benefit the environment that sustains us all. With the forest fires during the dry season came a lot of landslides during the rainy season - the mud from landslides ends up in the river that we get our drinking water from. There was so much mud water looked like chocolate - and we cannot drink it. We now understand how important the forest is so that our family has clean water and a good quantity of it."

Blanca Rossi Esquivel, member of the community and fuel-efficient stove user
"At the start, there was some resistance to change to these stoves because we needed training to use them and it takes longer to cook the food. But over time we saw the benefits, to our health from the clean air in our house and because women now do not need to go as often into the forest to collect the wood (and we carry less weight as we take small branches now), so they have more time to spend at home with family or for doing other things. People are also more willing to give their time to efforts to protect the environment, like planting more trees and taking care of the forest."

In numbers: Work in the Pasabien watersheds