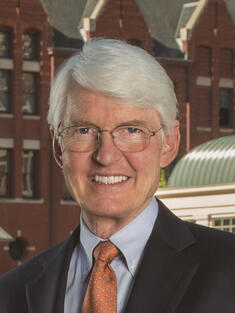 EDWARD P. BASS is extensively involved in business, conservation and ranching. A committed environmentalist, his long-time interest in the sciences is evidenced by the numerous national and international education and conservation organizations in which he participates. He is director emeritus of World Wildlife Fund, on whose board he served from 1988 to 2007. In addition, he serves on the executive committees of the New York Botanical Garden and the Botanical Research Institute of Texas and is an honorary trustee of the National Environmental Education Foundation. He is founding trustee of the Philecology Trust, created in 1986 to fund selected nonprofit ecological interests, and of the Philecology Foundation, established in 2007. A cofounder of Biosphere 2 near Tucson, Arizona, Bass helped guide that organization’s transition to a major research center of the University of Arizona. In 2009, he was awarded the honorary degree of doctor of science by the University of Arizona in recognition of his contributions to the study of Earth’s environment. He served as a successor trustee of his alma mater, Yale University, from 2001 to 2013, and as senior fellow of the Yale Corporation from 2011 to 2013. He also serves as member and former founding cochair of the Leadership Council of Yale’s School of Forestry and Environmental Studies, as a member and former founding chair of the External Advisory Board of the Yale Institute for Biospheric Studies, and a member of the Yale Peabody Museum Leadership Council. Closer to home, Bass has been a leader in the redevelopment of downtown Fort Worth in what has been recognized as one of the most successful urban revitalization efforts in America. He serves as chairman of the board of the Fort Worth Stock Show and Rodeo and chairman emeritus of Performing Arts Fort Worth. An avid rancher, he is active in the direction of personal and family interests, including holdings in Texas and the Flint Hills of Kansas, where the focus is on the sustainable management of the tallgrass prairie ecosystem using controlled burning and seasonal cattle grazing as rangeland management tools.