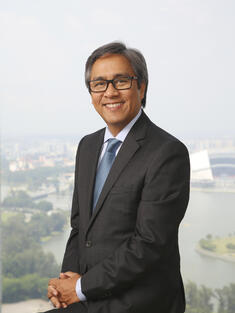 VINCENT PÉREZ is Chairman of Alternergy, a Philippine renewable power company in wind, hydro and solar. As Philippine Energy Secretary from 2001 to 2005, he promoted clean indigenous energy and crafted an ambitious renewable energy policy framework. He served briefly as Industry Undersecretary and was vice chairman of the Philippines’ Renewable Energy Board. Vince first became involved with WWF in 1989 by arranging debt-for-nature swaps. He was a founding trustee and chairman of WWF-Philippines, and later elected a member of the WWF-International Board. Currently he is a trustee of WWF-China, a member of advisory boards of Bhutan Foundation, New Zealand Trade and Enterprise, Pictet Clean Energy Fund, and Yale Center for Business and the Environment. Vince had 17 years of experience first in Latin American debt restructuring at Mellon Bank, and later in debt capital markets in emerging countries at Lazard in London, New York and Singapore. He was a Partner at Lazard Frères in New York as head of its Emerging Markets Group and later a Managing Director of Lazard Asia in Singapore. Vince then founded Next Century Partners, a private equity firm in Singapore, and founded Asian Conservation Company, a venture philanthropy that acquired El Nido Resorts, an eco-tourism destination in Palawan. Vince is a director of ST Telemedia, a strategic investor in information and communication technology companies, and of Banco de Oro, the largest Philippine bank. He holds an MBA from Wharton School of the University of Pennsylvania, a BS in Business Economics from University of the Philippines, and was a Yale World Fellow, where he lectured an MBA class on renewable power. He and his wife, Maria Adora, reside in Manila and Melbourne, and they have three sons and one daughter. Vince enjoys Pilates, yoga and zen meditation.