Coastal East Africa encompasses a beautiful tapestry of land and sea—from mountains and grasslands to mangroves and fringing coral reefs. Within this region, WWF works in Kenya, Tanzania and Mozambique and the western part of the Indian Ocean. Elephants, rhinos, lions, wild dogs, and more iconic species roam the landscape. Along the coasts, you can find dugongs, whale sharks, dolphins, whales, and five species of marine turtles. The waters of the Western Indian Ocean also support globally important shrimp and tuna industries.

For all its richness, the region also has some of the highest rates of people living below the poverty line on the planet. People here depend on the region’s natural resources—clean freshwater, healthy forests and mangroves, and abundant fish and wildlife. These resources must be managed sustainably to ensure their future. Local communities need the ability to protect their resources against illegal activities.

In response to Covid-19, a new partnership will boost the devastated nature-based tourism industry in Africa

With $1.9 million in funding from the Global Environment Facility, an African Nature-Based Tourism Collaborative Platform is being developed to connect funders to communities and small and medium enterprises involved in nature-based tourism in eastern and southern Africa—and who are most affected by the loss of revenue due to Covid-19. 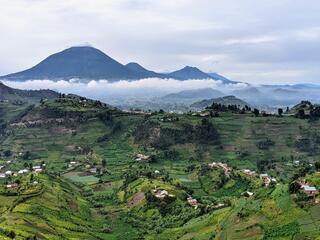 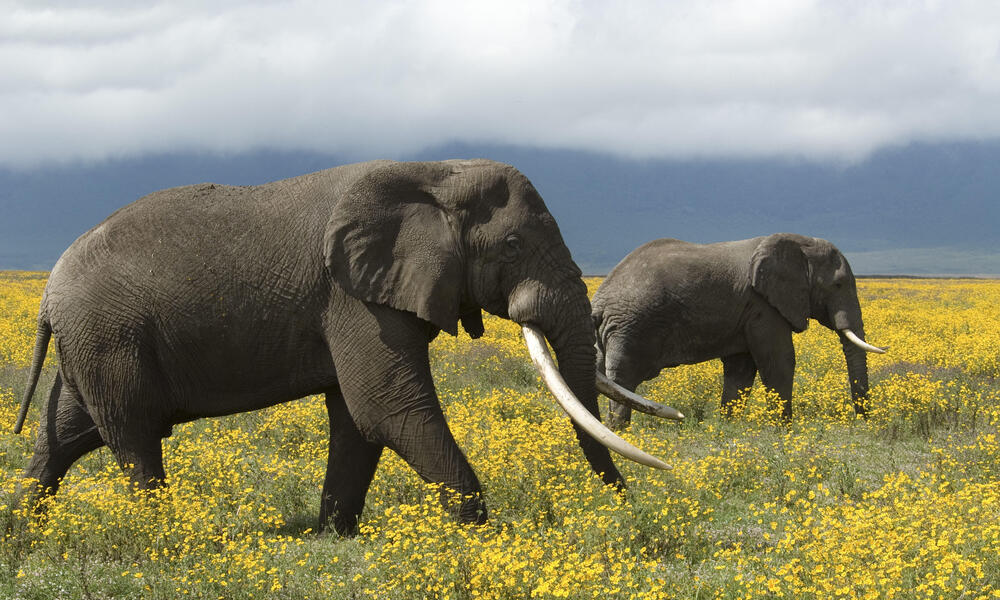 The region also provides habitat for threatened shorebirds and seabirds, including the sooty tern, the masked booby, the greater crested tern, and the brown noddy. The Kiunga Marine National Reserve in Kenya supports the world's largest breeding colony of roseate terns. 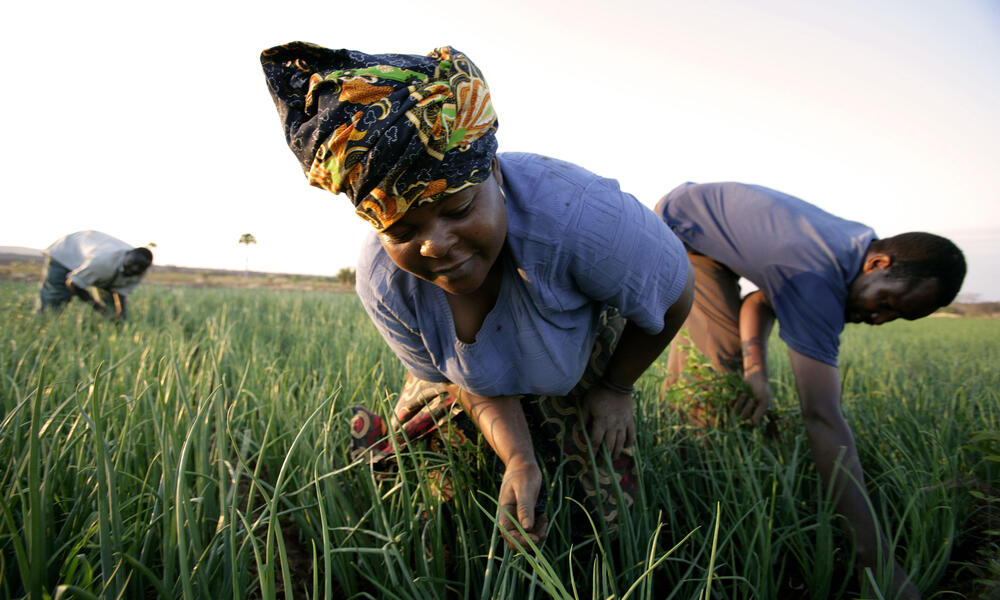 WWF works with local communities, governments and industry to create awareness and appreciation for the connection between nature and people. We assist local communities in securing management rights to their local wildlife and fisheries. We work on sustainable use of natural resources, such as certified timber or fisheries, which also creates incentives for conservation. WWF strives to ensure that local people benefit from economic opportunities that come with new tourism enterprises.

In Tanzania, WWF works with partners to help improve lives and protect wildlife through the creation of Wildlife Management Areas (WMAs)—communal lands where local communities participate in the management of wildlife and resources. WMAs create opportunities for wildlife tourism, which directly benefits local communities through jobs and revenue. For example, men from local villages are now employed as game scouts, patrolling for poachers over hundreds of miles, often on foot. This protection of wildlife creates a strong and sustainable incentive for conservation. WWF’s goal is to have over 31 million acres of land in Tanzania managed in this way, which will help wildlife migration outside of protected areas.

Ibo Island, one of 27 small islands in the Quirimbas Archipelago.

WWF strives to develop practical solutions to address the conflict that frequently occurs between people and wildlife. In and around Quirimbas National Park in northern Mozambique, we have worked with farmers to minimize physical confrontation with elephants, protect crop fields and save lives. The use of deterrents—noise or chili peppers—has resulted in a dramatic reduction of conflicts and crop field destruction.

WWF works with farmers to develop climate “smart” solutions that conserve natural resources and protect wildlife habitats, while improving local food security and incomes. We encourage the use of drought resistant and high yield crops—such as maize and beans—and distribute improved seed varieties. We work with famers to improve soil fertility, resulting in greater yield on less land. This also leaves more habitat for wildlife and keeps farms close to home.

To provide further sources of income—and also serve as markers for property boundaries—WWF helped incorporate citrus trees. We also introduced a new program of raising goats and offered improved husbandry techniques to reduce the animals’ impact on vegetation and crops. 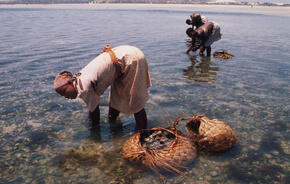 Approximately 55,000 people live in or around the Quirimbas marine reserve off the coast of Mozambique. Nearly all of them rely directly on its marine resources for their livelihoods. Villagers found that the small no-take zones that allowed fish stocks to rebound also produced an abundance of oysters. WWF and partners have helped fishermen create a sustainable oyster harvesting system, resulting in increased profits and yield. 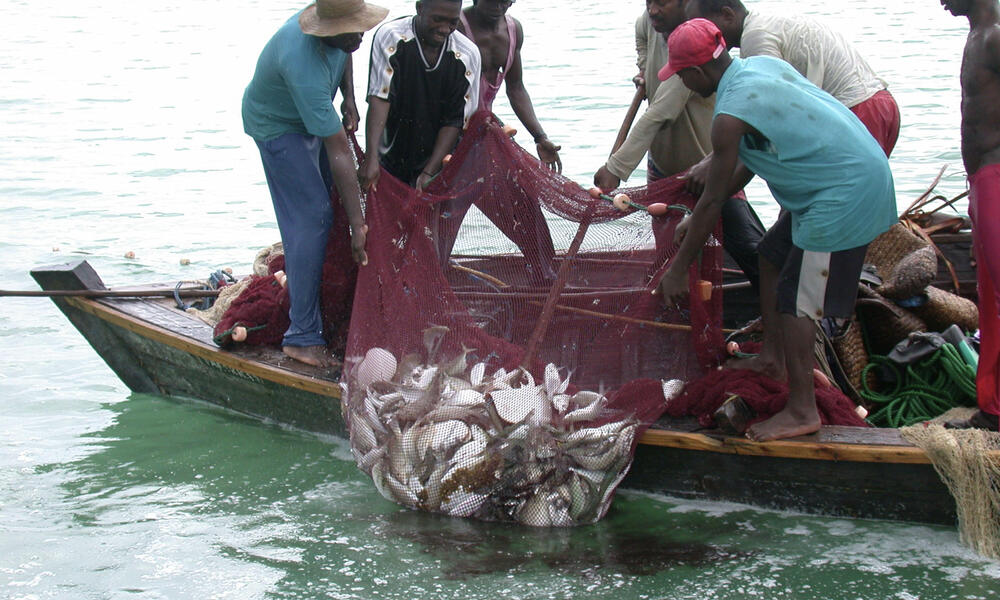 This region already suffers from unpredictable rainfall and frequent drought, along with intense rains and flooding. Coastal storms bring stronger winds creating greater wave damage along shorelines. Weather extremes also severely threaten the region’s traditional livelihoods of farming and fishing. In rural areas, people have lost crops and livestock and face hunger and outbreaks of malaria. Climate change is expected to intensify these and other problems. Warming seawaters threaten the incredible diversity associated with the regions’ coral reefs, leading to die-offs from bleaching. Coastal erosion threatens the nesting beaches of marine turtles and harms mangrove forests—which are already being battered from increased storm surges, and vulnerable to future sea level rise.

Overfishing—for local consumption and export to commercial markets—poses a major threat to the region.

The health of stocks is wavering, particularly for tunas such as yellowfin and bigeye. Some fishing practices are causing unacceptable amounts of bycatch—threatening shark, marine turtles and seabird populations.

Illegal, unreported and unregulated fishing may account for as much as a third of total catches in some important fisheries in the region, and the capacity for local enforcement is severely lacking. Foreigners operate large-scale industrial fisheries along the coast, exporting most of the catch. 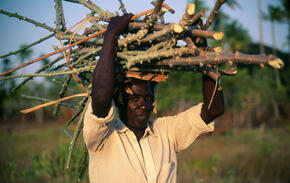 Overharvesting of timber and illegal commercial logging continue to threaten forests in Coastal East Africa. An ever-growing population dependent on timber and fuel wood continues to put pressure on this dwindling natural resource. The situation is exacerbated by large-scale illegal logging, which is often exported to international markets. Logging also opens up previously inaccessible forests to poachers and illegal wildlife traders.

Rising demand and weak enforcement have led to a higher incidence of elephant poaching and increasing ivory markets. Wildlife crime networks are using more sophisticated weapons and techniques to obtain ivory, such as automatic rifles and helicopters. Mozambique, Tanzania and Kenya are not only sources of ivory, but also major conduits for illegal wildlife trade. Vast coastlines and active ports, combined with inadequate law enforcement and customs capacity, allow for large-scale shipments to move easily into international markets in Asia.

“Chili bombs,” a mixture of dried elephant dung and hot chili, are placed in crop fields to keep elephants away because they do not like the smell of chili.

The second largest population of savanna elephants in Africa roam across this region in search of food and freshwater. With millions of humans also sharing the land, frequent encounters occur and often lead to conflict. Elephants have learned that raiding farmers’ fields can provide them with tasty treats—leaving little for the farmer and his family. Farmers are often killed while trying to defend their fields and elephants become the source of resentment and anger by the local communities. 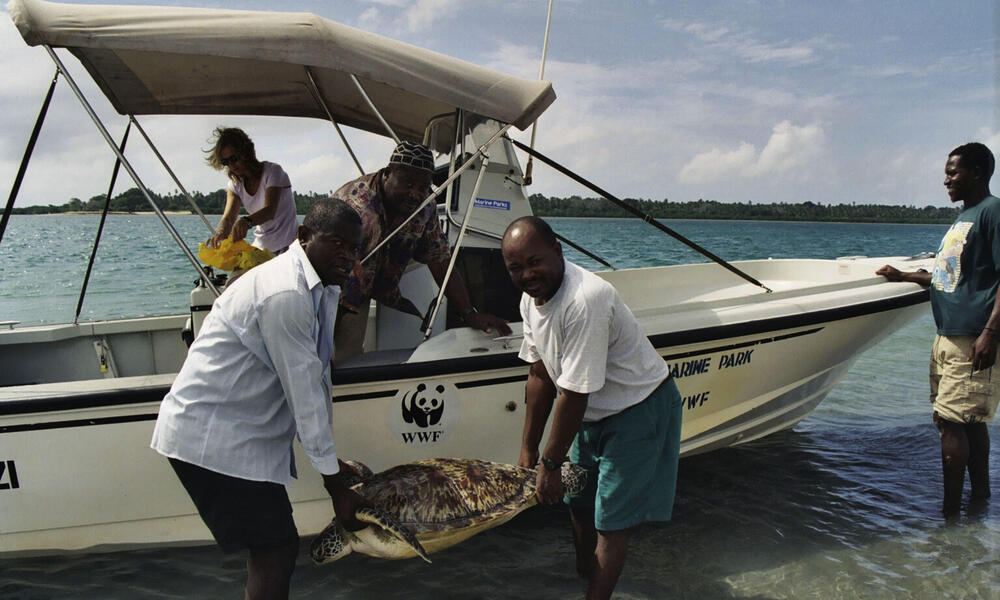 A green turtle that was accidentally caught in fishing gear is about to be returned to the wild by WWF staff.

The islands of Primeiras and Segundas off the coast of Mozambique are a major nesting site for several marine turtle species. WWF, in partnership with CARE, has worked to train local rangers to patrol nesting sites along these islands and marine turtle poaching has decreased significantly. We also work with local communities in Mozambique and Kenya to reduce turtle harvesting and local trade. Because exploitation of turtles is often driven by a lack of economic choices, WWF works to develop alternative livelihoods so that local people are no longer dependent on turtle products for income.

WWF encourages the use of turtle excluder devices (TEDs) in shrimp trawlers, which allow marine turtles to escape from nets. In Mozambique, WWF helped initiate a new law that makes TEDs mandatory in the country’s shrimp trawl fleet. Once implemented, the law will save the lives of up to 5,000 marine turtles per year and allow Mozambican fishers to sell their shrimp to the U.S. market. 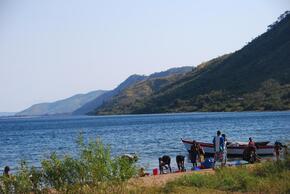 Lake Niassa is an important source of freshwater, home to over 1000 fish species and critical to the livelihoods of the people of Mozambique. Threatened by illegal fishing, agricultural pollution and surrounding forest degradation, WWF worked to protect this area for future generations. In 2011 with WWF’s support, the government of Mozambique officially created the Lake Niassa Reserve. Lake Niassa is located in Mozambique and shares borders with Malawi and Tanzania. It spans 11,430 square miles (Mozambique’s portion is 2,470 square miles), is the eighth largest fresh water lake in the world and second deepest in Africa.

WWF helped Mozambique establish the Quirimbas marine reserve in 2002. The park is Africa’s largest marine protected area—rich with coral reefs, dugongs, dolphins, marine turtles, whales, sharks and hundreds of species of fish. Local communities play a critical role in management and patrolling of the area, and have established sanctuaries (no-fishing zones) that allow for the recovery of depleted fish stocks and corals. WWF has also helped community fishing councils gain authority to combat illegal fishing in the reserve. Increased numbers of fish in the sanctuary areas benefit local fishermen who catch more fish in the surrounding areas, and have fueled a profitable tourism industry. 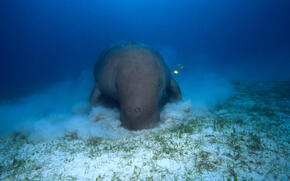 In the Western Indian Ocean, WWF works to transform the way fisheries are managed in order to achieve sustainability. One area of work focuses on tuna, as we seek to help fisheries achieve certification by the Marine Stewardship Council (MSC). We also work towards MSC certification for the deep water shrimp fishery in Mozambique. To reduce illegal fishing, WWF supports local rangers who monitor artisanal fisheries. Through our involvement in the creation of local fishing associations, fishermen are recruited to monitor bycatch of turtles and dugongs and provide us with important data on population trends. 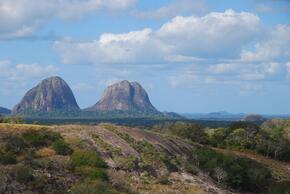 Elephants and other wildlife require freedom to roam in search of food and freshwater. There are protected wildlife areas in southern Tanzania and northern Mozambique, but they are separated by areas with large human populations. Wildlife need corridors to move safely and easily between protected areas. WWF works with government and communities to develop land use plans that allow wildlife movement and human use to coexist.

We work with farmers to adopt practices that conserve resources and use less space, ensuring forest remains intact for wildlife. We help them increase crop yield, improving livelihoods and offering alternatives to poaching. We also provide tools to reduce conflict with wildlife.

WWF seeks to halt the illegal logging in Mozambique and Tanzania that is destroying vital coastal forests. We collaborate with authorities on a comprehensive investigation of illegal practices in an effort to create new policies and standards that mandate sustainable forest management and trade.

Aiming to reduce illegal activities, WWF helped the governments of Tanzania and Mozambique agree to work cooperatively on improving forest management. This benefits local people who rely on the forest for their livelihoods and frees up resources for the governments to improve local education and health infrastructure. 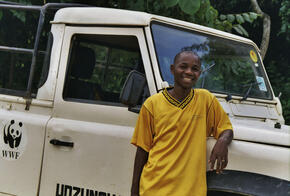 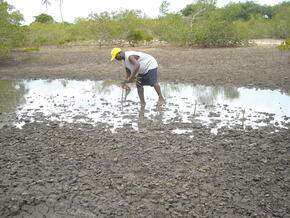 WWF has worked with local communities to replant and restore degraded mangrove forests in Tanzania and Mozambique, enhancing the resilience of these habitats to climate change. The different types of mangroves that were planted can withstand longer periods of flooding. At the same time, inland areas were restored, enabling mangroves to adapt to sea level rise.

WWF works with communities to identify vulnerabilities to climate change, and help them develop strategies to adapt and increase their resilience. For example, we work with farmers to adopt drought resistant crops and conserve natural resources in the face of water shortages.