Climate change threatens the fragile balance of our planet’s ecosystems and significantly increases the risk of species extinction. A warmer world also poses great risks for society such as crop failure, water shortages and national security concerns. To avoid these devastating consequences we must slow climate change by drastically reducing the carbon pollution generated from burning fossil fuels. Embracing renewable energy, along with ambitious energy efficiency measures, is the best way to achieve the rapid pollution reductions we need while also creating millions of new jobs and ensuring America remains competitive in the global economy.

To help achieve this goal, World Wildlife Fund, in collaboration with energy consultants at Ecofys, prepared The Energy Report which explores how to power the world entirely by renewable energy by the middle of this century. The result is the most ambitious, science-based examination yet of a renewable and clean energy future on a global scale. It covers all energy needs and the challenge of providing reliable and safe energy to all. Importantly, it uses deliberately conservative assumptions: fossil fuel price increases of no more than two per cent annually, deployment of technologies available today and continuous but not disruptive renewable energy expansion. It is an ambitious but achievable vision that outlines the key changes required to achieve a fully clean energy future and avoid catastrophic climate change.

Key Points of The Energy Report

• The Ecofys scenario, contained within The Energy Report, concludes that it is technically feasible to supply everyone on Earth with the energy they need by 2050, with 95 per cent of this energy coming from renewable sources utilizing technologies current or in development today. In its report, WWF indicates how its vision of a 100 per cent renewable and sustainable energy supply could be realized.
• In 2050, ambitious energy saving measures result in total energy demand being 15 per cent lower than in 2005 - despite population, industrial output, passenger travel and freight transport rising as projected.
• As far as possible electrical energy is used instead of solid or liquid fuels. Wind, solar, geothermal and hydropower are the main sources of electricity, with solar and geothermal sources, as well as heat pumps providing a large share of heat for buildings and industry.
• Bioenergy (liquid biofuels and solid biomass) is used as a last resort where other renewable energy sources are not viable - for aircraft, ships and truck haulage and industrial processes requiring very high temperatures.
• By 2050, we save nearly $5.4 trillion globally each year through energy efficiency and reduced fuel costs over a "business-as-usual" scenario.
• Under the Ecofys scenario, fossil fuels, nuclear power and traditional biomass are almost entirely phased out by 2050.

Achieving a sustainable renewable energy future will take determined action at the international, national, community and individual levels - and the sooner such action is taken the earlier the benefits will be realized. At the international level, the clearest priorities are strong international agreement on climate change action, including viable levels of assistance to help developing countries to a sustainable energy future. Regional, national and local governments need to cut perverse subsidies and commit to targets and pathways to energy efficiency and renewable power. Business needs to begin following some of their own leaders into a green economy future. And individuals need to consider the implications of their energy use and lend their support to moving to a sustainable rather than an anxious and threatened future. 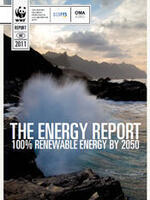