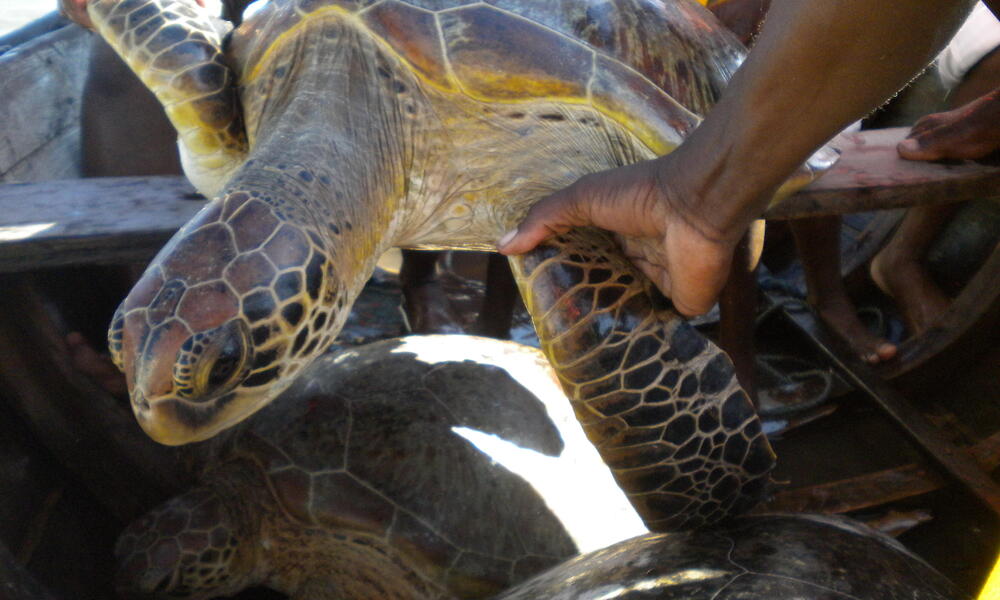 An ocean ranger returns a rescued green turtle to the sea.

Fishing is a way of life in the Primeiras and Segundas archipelago off the coast of northern Mozambique. But with fish stocks suffering from overfishing and unsustainable practices, some local villagers are turning to the harvest of sea turtles to make ends meet. Such hunting is illegal, as the green sea turtles that nest in the southern islands and inhabit the surrounding beds of seagrass are endangered.

Unfortunately, selling the meat of these turtles can be a lucrative business—particularly for local fishermen whose daily catches are diminishing. In June 2012, several men were spotted heading out to the islands with nets designed to catch turtles.

Upon hearing that the men had gone turtle hunting, three community guards camped at Mpuitini Beach and waited for the group to return. A lack of fuel rendered the guards unable to intervene out at sea, so they apprehended the five men as they returned to shore in a small wooden boat carrying four green sea turtles.

The guards are part of the Primeiras and Segundas Livelihoods Program, a joint effort by CARE and WWF launched in 2008 to empower and educate local residents on the threats to turtles and the alternatives for sustainable fishing. The program is a piece of a broader alliance aimed at addressing the root causes of poverty and environmental degradation in the world’s poorest communities that rely on natural resources for food, water, shelter, and income.

The Livelihoods Program in Mozambique includes a team of community guards who are paid a small monthly incentive to patrol the estuaries and inform local fishermen about laws against turtle poaching and specific regulations for nets and other fishing practices. Their first response to fishermen caught violating local fishing laws is simply to talk to them about the laws. But they get tougher with repeat offenders and anyone caught hunting turtles, taking the offenders directly to local law enforcement.

In the June incident, the guards took the leader of the group into custody and moved the turtles to the police station, where they were guarded overnight. In the morning a team of CARE and WWF staff, the chief of police, and government representatives loaded the large turtles into a motorboat and released them near the island of Careca, where they had been captured. Meanwhile, the leader of the poachers was fined 14,000 meticais (about $520) and imprisoned for six days.

The guards see the urgency of the turtles’ situation. “If we hunt too much, turtles may disappear forever,” Dínis Mário, head of the marine community guards in Moma district.

“They’re an important animal that needs our help to survive,” added Molidi Chale, one of the marine guards involved in the June intervention.

Their work, both on protecting turtles and promoting suitable fishing practices, is having a positive impact, particularly their efforts to raise awareness about the importance of conserving sea life as a basis for sustainable livelihoods. Their main strategy for engaging community members is day-to-day reinforcement of the rules and best practices to prevent problems. But when problems arise, their position as authority figures connected with law enforcement certainly helps.

“I think our presence in the field is important and necessary because when we are there, there aren’t many problems,” said Chale.

Mário agreed. “These incidences have declined,” he said. “We are happy [with] our work.”