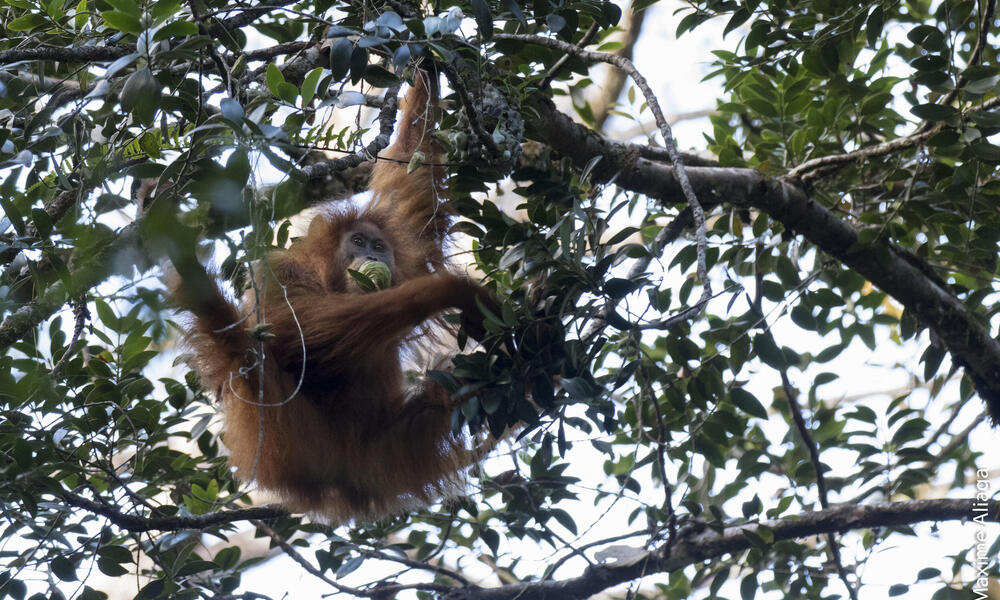 Previously, two species of orangutans were known—the Bornean orangutan and Sumatran orangutan. This new third species lives in North Sumatra, but is genetically and behaviorally distinct from the two other species.

An international team of scientists described the new species in Current Biology. The Tapanuli orangutan (Pongo tapanuliensis) is distinguished from other orangutan populations based on morphological and genomic evidence. The new species is endemic to 475 square miles of upland forest in the Batang Toru Ecosystem of Sumatra and is believed to have been isolated from other orangutan populations for 10,000-20,000 years.

The Tapanuli orangutan was first discovered in 1997 during an orangutan survey in the region. Over the next decade, the Sumatran Orangutan Conservation Programme (SOCP), together with other non-governmental organizations, universities, and Indonesian authorities, focused on learning more about the population. By 2006, a research station was established to study the orangutans’ behavior and genetics.

A breakthrough came in 2013 when researchers examined the skull of a male orangutan killed in human-wildlife conflict. When compared to orangutans from other populations, the skull from Batang Taru showed noticeably different characteristics. This discovery prompted the largest genomic study of wild orangutans to date. As a result, the data collected clearly identified three distinct evolutionary lineages among all orangutans.

The discovery of a new species of great ape in the 21st century is a cause for celebration. But it is also a call to action. Like all orangutans, the Tapanuli is under serious threat. Human encroachment—in this case from mining and a plans for a hydroelectric dam—as well as hunting put these orangutans in immediate peril.

“If steps are not taken quickly to reduce current and future threats to conserve every last remaining bit of forest,” the scientists point out in their article, “we may see the discovery and extinction of a great ape species within our lifetime.”

“This discovery not only demonstrates how much we still don’t know about the biodiversity on our planet, but also sheds further light on the precarious position species like the Tapanuli orangutan are in as their forest homes are increasingly threatened by conversion,” said Nilanga Jayasinghe, senior program officer for Asian species, WWF. “It’s critical to address the many threats to their habitat if we want to secure their future.”