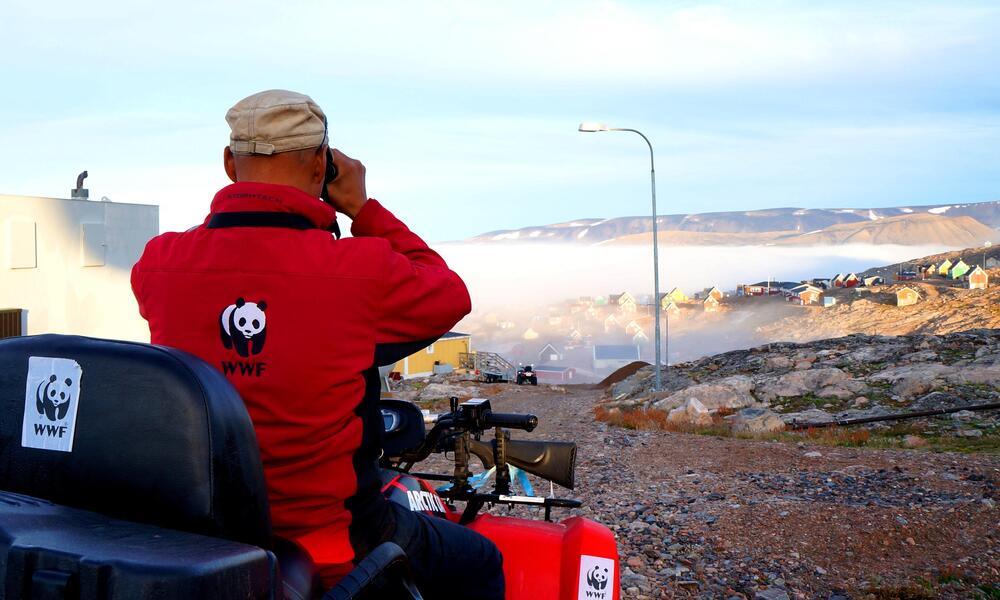 Dine steps outside the incineration plant early in the morning to smoke a cigarette. Flicking on his lighter, he finds himself looking into the eyes of a polar bear standing by his ATV four meters away. The bear moves straight towards him. Dine races for the corner of the building, and fortunately, the bear chooses to move in another direction.

Mikkel, who works at the weather station, goes to launch a weather balloon at 22:00. As he walks towards the building, he hears the ice crunch behind him. He turns around and sees a polar bear three meters away. He runs inside, and the polar bear takes off down the slope at the dump and swims towards Storesten.

The hard work of the polar bear patrol

Throughout the Arctic, conflicts between polar bears and humans have risen as summer sea ice shrinks due to climate change. In some areas, bears are now forced to stay on land for longer periods than before. In their search for food, they are often attracted to nearby villages.

In Ittoqqortoormiit, Greenland, the problem is particularly severe as a deluge of bears created life-threatening situations for both bears and the villagers.

In 2007, nine polar bear conflicts were registered in all of Greenland. By 2017, there were 21 conflicts between August and December in Ittoqqortoormiit alone. In almost all of the 21 cases, the local polar bear patrol was called to ensure that the bears were scared away from the community and kept under observation.

WWF provided support for the community to establish a polar bear patrol in 2015 to protect the town's 450 residents from dangerous encounters on their way to school or work, and to reduce the number of bears killed in self-defense. During peak polar bear season in autumn, the patrol is particularly active just before school opens each morning.

“The community members tell us that the patrol gives them greater peace of mind, and we prevent a lot of polar bears from being shot in self-defense”, says Bo Øksnebjerg, Secretary-General of WWF-Denmark. “So on the one hand, we’re glad that the polar bear patrol is working so well. On the other hand, we regret that the patrol is so busy. Everything indicates that the problem of hungry polar bears in communities will continue to grow as the sea ice shrinks.”

The village of Wales, Alaska—the westernmost town in mainland North America— started a polar bear patrol in 2016. Now, they are embarking on an expedition to six other villages in the region to tell their story, listen to the concerns of other villages, and see if a polar bear conflict avoidance/deterrence program might be a good fit for them. WWF has committed to helping two additional Alaskan villages initiate polar bear patrol programs in 2019.