Protecting progress in the Brazilian Amazon 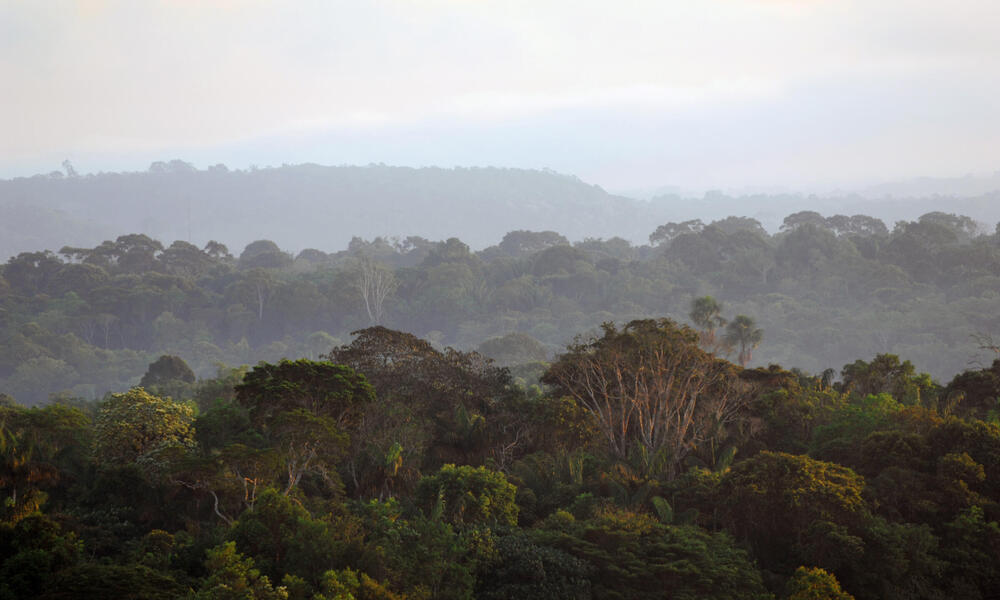 Here at World Wildlife Fund (WWF), our work always boils down to places and species and the communities they support. And among all the places in the world it's hard to compete with the importance of the Amazon, which is why it has occupied our energies and attention more than any other.

This amazing place spans nine countries and supports one in ten of every species on our planet, while covering one percent of the Earth's surface. A recent WWF report found that a new plant or animal species was discovered in the Amazon every two days between 2014-2015. It is, quite simply, home to the greatest wealth of plant and animal life on Earth. And it contains 154 million acres of indigenous lands, where more than 300 different languages are spoken by native peoples.

Beyond its irreplaceable biodiversity, the Amazon hydrological and climatological systems sustain life in the region, and across the globe. Its canopy helps regulate rainfall and weather patterns that deliver water to the region—not just for crops, but also cities to the South. This cycle relies on moisture from the forest itself evaporating into the atmosphere and then turning into rainfall as clouds move from east to west across the region. 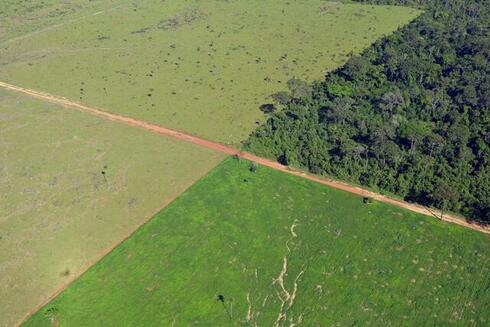 Deforestation from increased development, agricultural expansion, illegal logging or wildfires could throw this delicate cycle out of balance. Some experts estimate that merely 20 percent deforestation could constitute a "tipping point" after which the forest would dry out and weather patterns throughout the region would suffer. We are now perilously close, with 17 percent of the forest lost over the last 50 years.

The rainforest serves as a massive carbon sink, keeping 90—140 billion tons of carbon from releasing into the atmosphere. Allowing a fraction of that carbon to escape via deforestation would accelerate climate change. Allowing all of it to escape would be catastrophic.

We have seen important progress in recent decades, with deforestation rates dropping by 75 percent between 2000 and 2012. Much of that progress is the result of ARPA (or Amazon Region Protected Areas), an initiative of the government of Brazil which WWF, the World Bank, the Global Environment Facility, the Gordon and Betty Moore Foundation and many others have been supporting since it began. Launched in 2002, ARPA now protects nearly 150 million acres of rainforest—the largest tropical rainforest conservation project in history.

In 2014, WWF helped finalize a deal which created a $215 million “transition fund” to help Brazil cover the costs of maintaining these areas until it can assume the full cost on its own. According to one study, the ARPA initiative will help Brazil avoid at least 1.4 billion tons of carbon emissions by 2050. But deforestation rates rose 29 percent between 2015 and 2016, and while they again trended downward between 2016 and 2017, recent events in Brazil could lead to further losses.

A perfect storm of political and economic upheaval in Brazil—which holds a majority of the Amazon within its borders—now threatens to unleash agricultural and mineral development in previously protected areas of this unique ecological region, with potentially severe impacts on the hydrological cycle, wildlife and people. We can’t let that happen.

After years of growth, Brazil's economy is now in crisis—the result of a fall in global commodity prices and a pervasive corruption scandal that centers on the country’s major economic institutions. For the first time since 1931, the country’s GDP has fallen for two consecutive years, while unemployment has nearly doubled and the government deficit has increased to levels not seen since 2001.

The Brazilian government has also been beset by political turmoil. Allegations of obstruction of justice and criminal misuse of federal funds engulfed former President Dilma Rousseff’s administration, leading to her impeachment and the conviction of her predecessor on criminal charges. Fresh allegations involving illegal campaign donations now plague the current president, Michel Temer, weakening his hold on power.

Moreover, in April, over a third of government ministers and dozens of senators and representatives in Congress were placed under investigation. Mass protests by the Brazilian public have followed. Thousands took to the streets of Brasilia in May, in a demonstration that was ultimately quelled by the deployment of federal troops after the Agricultural Ministry building was set on fire.

As traditional power centers have collapsed, a large block of “ruralistas” have maintained a majority in Congress, gained influence over President Temer and driven an aggressive agenda focused on agricultural expansion. Unfortunately, to achieve this expansion, the Brazilian President and his allies have made clear that they are willing to undo decades of conservation gains with little regard for the consequences.

The last six months have brought a flurry of measures from the Congress that threaten to exacerbate deforestation by opening up two prominent protected areas (over 2 million acres) to agricultural production. After those measures moved to the President’s desk for signing in June, WWF worked with others to orchestrate a global campaign to convince Temer to veto the measures.

Through the first six months of 2017, WWF-Brazil helped generate more than 800 news articles about the various efforts to downgrade, downsize or degazette protected areas. The campaign included tweets from celebrities with millions of global followers like Gisele Bündchen and Leonardo DiCaprio; and a social media initiative that reached more than 3 million people and garnered more than 20,000 signatures for a public petition against the measures.

It also included op-eds by leaders, such as WWF-US National Council member Tom Lovejoy; an excerpt from Tom’s op-ed is below, illustrating the kind of “tipping point” scenario America experienced during the dust bowl which could also happen in the Amazon if we aren’t careful:

It was straight out of the Book of Job. In the midst of the Great Depression of the 1930s, some unknown and unaware farmer in the American Middle West cut some trees that tipped the center of the North American continent into an environmental plague: The Dust Bowl. Gigantic dust storms dominated the Plains and crippled its agriculture for years. Only massive tree planting, the creation of a major government program called the Civilian Conservation Corps, and better plowing and planting were able to bring back American agriculture to what it is today.

On June 13, the news finally came, and in an unexpected fashion. At 12:11 pm local time in Brasilia, President Michael Temer issued a tweet announcing he was vetoing the measure. Of note, he addressed Gisele and WWF directly in signaling his intent:

Unfortunately, our celebration was short-lived. New legislation once again began moving through the Brazilian Congress to replace the vetoed measures—more than 30 bills in total that could put 19.7 million acres at immediate risk. And in August, the President announced the opening of another area in the northern Amazon—known as the National Reserve of Copper and Associates (Renca)—to commercial mining that would have increased pressure on protected areas. A Brazilian court has since suspended the President’s decree, and the Administration subsequently withdrew it.

In the past, Brazil’s commitment to protect the Amazon made the nation a world leader in the fight against climate change. Global deforestation is responsible for roughly 15-20 percent of annual CO2 emissions. Brazil’s backsliding threatens efforts to reduce these figures and jeopardizes future funding for Amazon conservation.

Norway has given over $1 billion to Brazil’s Amazon Fund since 2008, and had pledged to continue giving about $120 million annually through 2020. But that commitment requires Brazil to meet certain benchmarks. Norway has already cut its current annual payment in half due to increased deforestation in the Amazon, and could end payments if deforestation rates continue to rise. The same holds true for the $215 million raised for ARPA. If the government of Brazil steps back from its pledge to protect the Amazon, other nations could follow.

This will be one of the great litmus tests of our movement: can we marshal the resources necessary to secure the gains we’ve made and chart a new path forward?

Someone recently said that WWF’s role is to help be a bridge—to ensure that the natural world remains and endures, until that time when governments, businesses and civil society come to recognize its true value. We think that’s right, but we also believe we have a role to play in accelerating that process.

Other nations in the Amazon region are making good progress. Peru is working with WWF to finance the protection of 41 million acres, and Colombia is working to finance the protection of 42 million acres—a particularly important step as that nation emerges from decades of armed conflict and begins to develop areas of the country that were previously too volatile to access. It would be a shame to take steps forward in those countries only to step backward in Brazil.

Here are the steps we, as conservationists, need to take to keep the Brazilian Amazon protected:

1. Support Allies in the Brazilian Government

We should continue working with allies in the Brazilian Congress to block or delay legislation that would further encroach on protected lands. These allies form the Frente Parlamentar Ambientalista, headed by Alessandro Molon. We can also engage with the Temer Administration and urge them to listen to the voices within their government that favor conservation. Indeed, although President Temer has appointed a number of pro-development leaders to lead Brazilian agencies, there are many others employed by the government who understand the threats posed by deforestation and are quietly working to influence decision-makers. And we can monitor relevant cases brought before Brazil’s judiciary, which has historically served as an important bulwark against the overreaching impulses of the executive and legislative branches.

Outside of the government, conservationists can work to inform and energize the Brazilian people. The vast majority of Brazilians live in cities and may not be aware of the tangible benefits that the Amazon brings to their daily lives, such as its role in regulating the rainfall and weather patterns that deliver water to Rio and Sao Paulo. Let’s make sure all Brazilians understand what they stand to lose.

Many global corporations have pledged not to source any commodities, like soy and beef, that are produced through deforestation. As ruralistas in Brazil continue to push the boundaries of where they can clear forests, we need these companies to be more vigilant than ever in tracing the origin of their products.

The fate of ARPA, as well as Brazil’s economy in general, is tied largely to financing from international banks, governments and private donors. ARPA for Life funds are already tied to performance benchmarks, so we can work with the financial backers of that initiative to communicate with the Brazilian government about the implications of implementing any new anti-conservation measures. And we can engage banks and other financiers to discourage investments in infrastructure, mineral or agricultural development that have negative environmental impacts and establish incentives that encourage green growth.

The mission of keeping 80 percent of the Amazon intact for all time will not be accomplished in a month or even a year; it will be the cumulative result of many people over many years standing up for what’s right. We look forward to standing with our WWF colleagues, our global network of supporters, and the people of Brazil for as long as it takes.