Supporting communities and forests in Laos

WWF and villagers work together on sustainable rattan production

Over the last decade, Linhthong La-Intong has seen many changes in Sobphouan, his small village located in central Laos’s Bolikhamxay Province. But, he says proudly, there’s one thing that has remained the same: the forest.

That’s because the village of Sobphouan, with help from WWF, is a leading example of successful efforts in Laos to replace traditional agriculture and farming—drivers of widespread deforestation—with sustainable rattan production.

Rattan is a naturally renewable palm plant that grows in the tropical regions of Africa and Asia. Commonly used for furniture, building material, crafts, and more, it’s a non-timber forest product (NTFP) that’s relatively easy to grow and harvest. In Laos, where 80% of rural people’s livelihoods are dependent on agriculture, rattan has become an invaluable commodity that’s now part of a global trade that generates $4 billion USD per year.

But in recent years, over-harvesting and land conversion for cash crops have caused a rapid decline in natural rattan. Agriculture, farming, and commercial exploitation of timber have meanwhile spurred extensive deforestation in Laos and neighboring countries, increasing pressures on forests and the communities that depend on them. Without better regulations and forest management, the region faces serious threats resulting from depleted natural resources.

Since 2006, WWF has partnered with local villages, provincial governments, and corporations across Laos to address and combat these destructive practices. With support from IKEA, the Swiss Agency for Development and Cooperation (SDC), and the Swedish International Development Cooperation Agency (SIDA), the WWF-led project funds and trains local villagers in harvesting, producing, and selling sustainably produced rattan. By providing alternative livelihoods for communities, the project is also helping to alleviate pressure on forests while empowering communities to effectively manage their natural resources.

La-Intong and fellow villagers are already reaping the benefits. In the 10 years since he switched from fishing and farming to growing rattan shoots, La-Intong’s income has more than tripled. “I’m proud of my product,” he says. “Before the WWF project, I didn’t know how to plant rattan seedlings. Now, selling rattan shoots is my main occupation.”

WWF’s work in Bolikhamxay Province is just one example of larger efforts in the Greater Mekong region to establish a sustainable rattan supply chain from natural forests and to support communities by creating alternative livelihoods from NTFPs.

“We focus on strengthening local livelihoods by building villagers’ capacity to develop alternative sources of income and to manage their forests sustainably,” adds Boavanh Phachomphonh, project manager of WWF-Laos Rattan & Bamboo. “And our approach is simple: people first.”

Linhthong La-Intong, head of Sobphouan’s forest patrol group, sells rattan shoots and products in Bolikhamxay Province. In many parts of Laos, villagers hunt wildlife for food or in response to crop loss. But in Sobphouan, sustainable rattan production provides a reliable source of income. As a result, there’s little conflict between the villagers and wildlife. 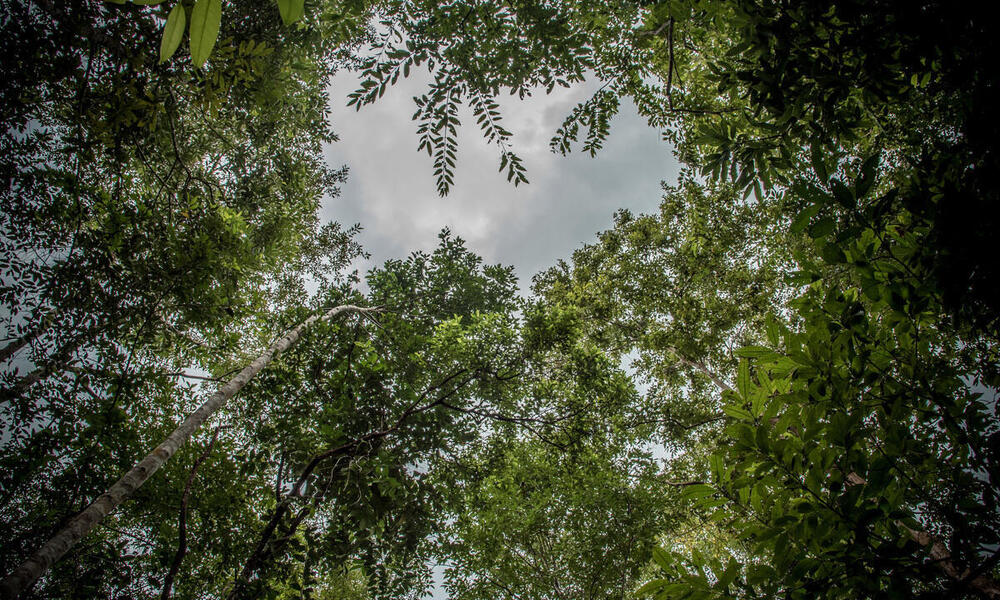 The canopy of a rattan forest in Sobphouan Village. One key aspect of the project is certifying and protecting forests where rattan and other valuable non-timber forest products (NTFPs) grow through the Forest Stewardship Council (FSC). FSC certification ensures that forests are well-managed and benefiting local communities, and also helps meet the growing international demand for sustainably sourced products. In 2011, Bolikhamxay Province achieved the first-ever FSC certification of a natural rattan forest.

A villager harvesting rattan cane in Bolikhamxay Province. One of the most significant benefits villagers receive from harvesting rattan is a stable income. The WWF project has established a benefit-sharing system through which rattan harvesters agree to contribute 17% of their income back to community projects and forest management. 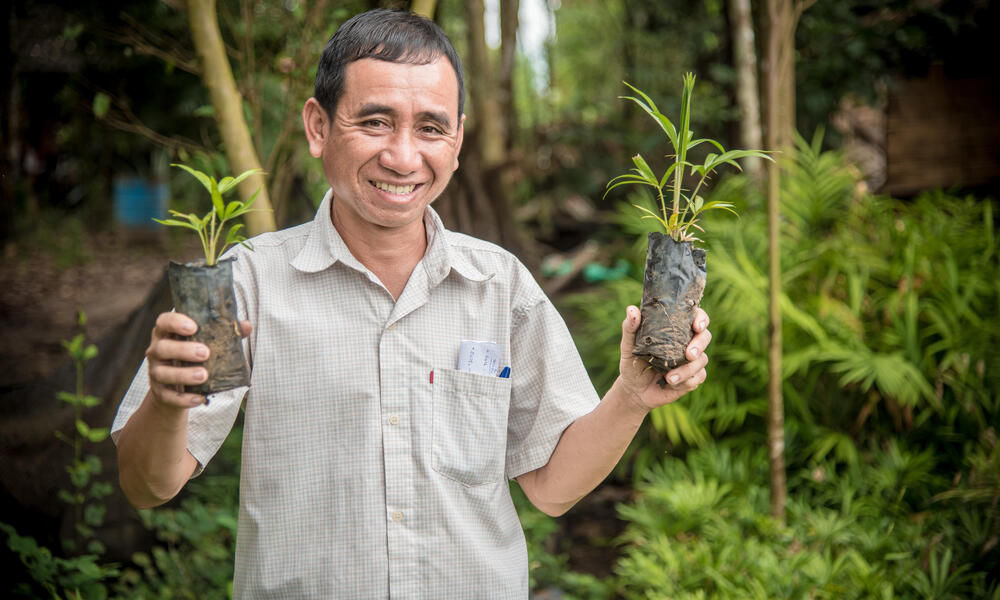 Khensy Milatid, Deputy Chief of Thaveng, heads the local group that produces rattan handicrafts for export. “We used chop down rattan and collect stumps for food," he says, "Now, I see it as something valuable. Without the forest, it's hard for me to live.” 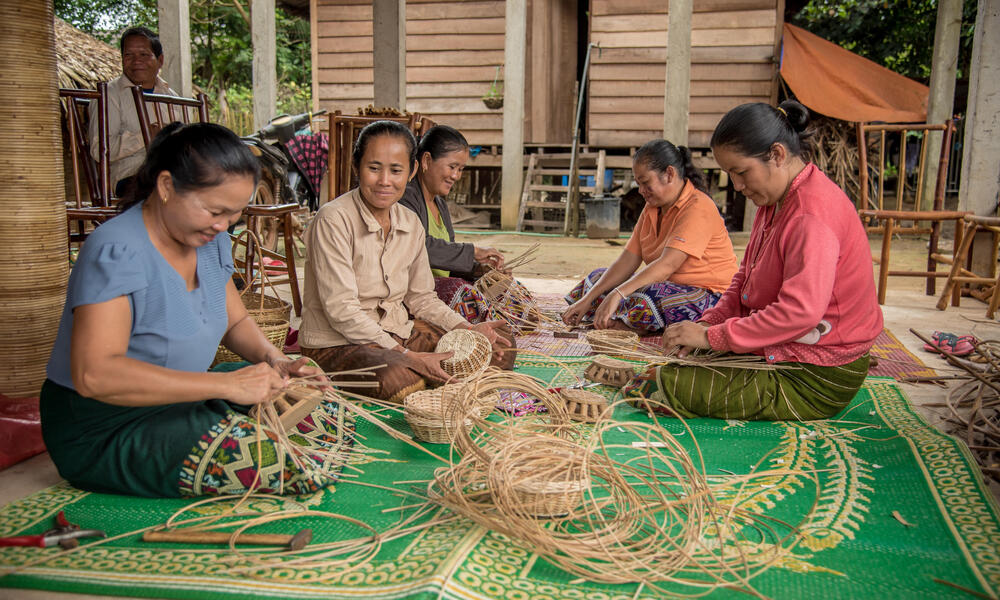 Women weaving rattan baskets in Thaveng Village in Bolkhamxay Province. Villagers have been trained to manage their inventory and harvest, and to split and weave rattan that’s sold domestically and exported to countries like Thailand, Switzerland, Sweden and the US. “The WWF project helped train us and encouraged us to do work that now provides us with sustainable income,” says Khensy Milatid, Deputy Chief of Thaveng Village. “The project acts like a bridge between us and the world market.”

Women skillfully weaving rattan chairs and other products at the Danlao factory in Vientiane, Laos. Danlao sources rattan and finished products from villages that are part of WWF’s sustainable rattan project. 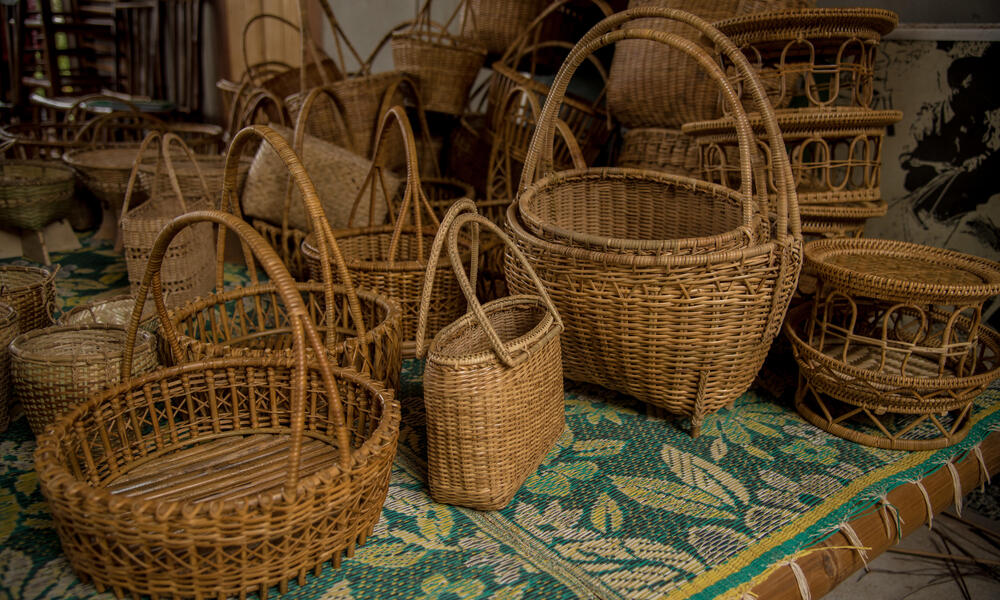