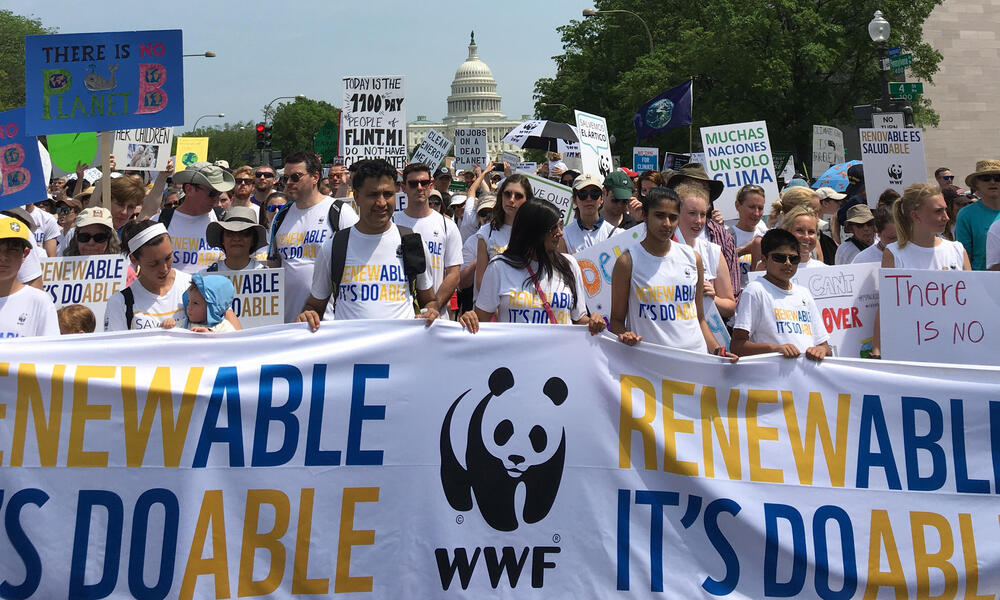 “There's no Planet B!” This was a rallying cry chanted by WWF staff, activists and supporters who gathered today on the National Mall at the People’s Climate March in Washington, DC to fight for climate change mitigation. As I navigated through the sea of neon signs, puffy-painted t-shirts and boisterous chants, I was struck by the sheer number of those who gave up their sunny Saturday to join the fight for climate in our nation’s capital, and I left feeling deeply inspired that together, we can provoke positive change.

The crowd was fired up. This was especially obvious during the march’s significant moments: the kickoff, moment of silence and moment of noise at the White House and the end-of-march gathering at the Washington Monument. In the midst of uncertainty as to where America’s energy policies are headed, concern for the future was funneled into an emphatic call for action.

The Arctic is melting, sea levels are rising, coral reefs are bleaching and droughts threaten crops and food security. These are all signs that our planet is at risk from climate change, and the future can seem dire and overwhelming. But we can’t bury our heads in the sand. We can and must address the climate crisis by reducing carbon pollution, advancing policies to fight climate change, working with businesses to reduce emissions and helping people and nature adapt to a changing climate. And it’s up to us to make sure our policymakers and representatives take action to do so.

Lou Leonard, WWF’s senior vice president of climate change and energy, also took part in the march today, and told me “Facing the climate threat is up to all of us.  Now more than ever, we need a new generation of climate leadership. As I marched alongside moms and dads, students and scientists, city leaders and business owners, I saw those leaders today. I’m more convinced than ever that we are up to the challenge.”

I wholeheartedly agree. The size and enthusiasm of the crowd showed me that we are prepared and ready to fight for the Earth, our home. I was so proud to be marching on the front lines of the climate movement today, and will continue to do so. I hope you’ll join me. You’ll be in good company.

Audrey Payne is a WWF specialist for media and external affairs