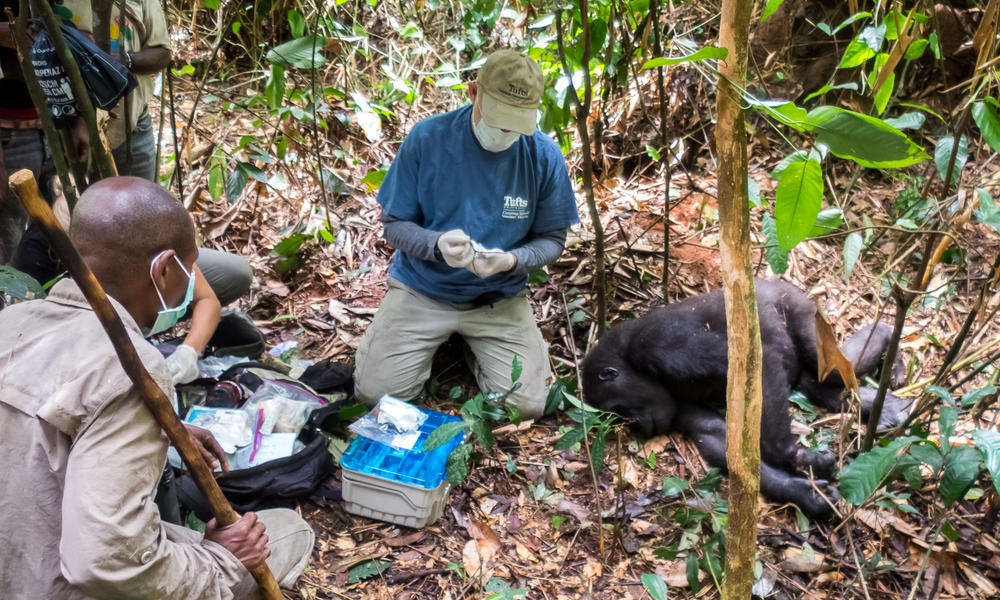 Wusa was a dedicated gorilla mother, doing her best to care for her three-month-old infant. But WWF staffers noticed something amiss with the adult gorilla in the Dzanag-Sangha Protected Areas of the Central African Republic. Her wrist was caught in a metal snare.

Snares are generally intended to catch small forest mammals in the forests. But great apes like Wusa can accidentally get caught and injured by them. If not treated, these snare-inflicted injuries can result in infection and eventually death. The metal snare embedding itself into Wusa’s wrist was causing her hand to swell and preventing her from putting weight on that hand, making mobility and caring for her three-month old infant difficult. 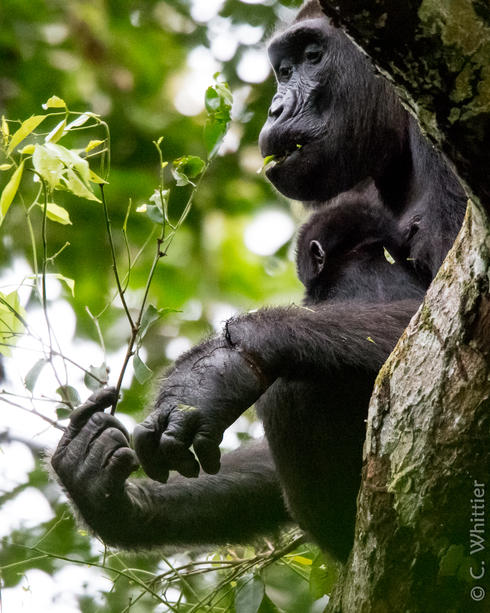 Wusa and her baby. Wusa's hand was swollen from the metal snare, making mobility and caring for her infant difficult.

WWF Primate Habitation Program staff alerted veterinary colleagues about the snare by email and phone. Dr. Christopher Whittier departed Boston the next day and once in the CAR joined the PHP team to find Wusa. Together, they tracked the gorilla for a day and a half before finally getting close enough to administer anesthetic.

With a new baby and a human-caused injury, Wusa was understandably very guarded and stuck closely to the group’s silverback gorilla leader, Mata. Initially, Wusa immediately ran away after being darted, with trackers scrambling to find her. As the immobilization drugs began to take effect, Mata became very upset and was trying to protect Wusa, but eventually retreated with Wusa’s baby under his protection. The trackers monitored Mata and the infant’s whereabouts while Dr. Whittier and the team were able to remove the snare and treat Wusa.

The team stayed close to Wusa as she recovered from the anesthetic and confirmed she returned to her group, where she was quickly reunited with her baby. She was observed resuming her normal behaviors including climbing and putting pressure on the injured arm.

Western lowland gorillas like Wusa are Critically Endangered. Their survival depends on establishing and managing protected areas like the Dzanga-Sangh Protected Areas (DSPA) where Wusa lives. DSPA is co-managed by WWF and the Central African Republic government, with most of the funding coming from WWF and the Sangha Tri-National Foundation.