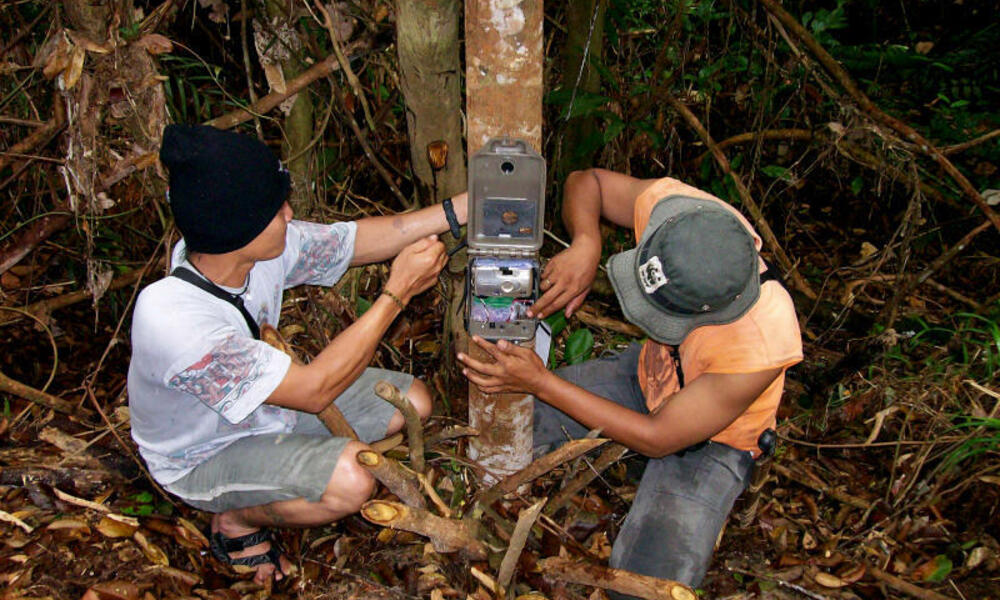 Q: "How often do you find the camera traps have been damaged or sabotaged by passing animals or humans?"
– Jessica, Cookeville, TN

A: "To date, after putting up cameras for seven months, we have had 14 (out of 80 cameras that we placed) stolen by people. Only few (fewer than 5) have been damaged by the animals."
– Sunarto, WWF Wildlife Biologist

Q: "When a camera trap flashes does it harm the animals' eyes?"
– Lisa, Hamilton, ON

A: "The cameras used in these camera traps are the same 35mm point and shoot type cameras that can be purchased anywhere. They do not use a special flash. So if the flash is safe for humans and their pets, we assume that it's safe for wild animals too."
– Matthew Lewis, Program Officer -- Species Conservation

Q: "How much film or memory can be stored in the camera traps at one time? And how often do you check them?"
– Jessica, Cookeville, TN

A: "The amount of film and the life of batteries -- and therefore how often we check camera traps -- are a function of the camera type and protocol for the study. At the moment we are still using standard 35mm film, so a roll of 36 exposures is all we can get. Because the camera flash has to remain charged and ready to shoot 24 hours a day, batteries last for about 36 exposures (two weeks to a month).

"The infrared trigger is passive so it lasts a little longer. However both are dependent on how much animal "traffic" there is at a site. A busy site will use up more film and batteries and we will check it more often.

"Digital camera technology is rapidly improving and the hope is that soon options will be available which are as quick as the 35mm cameras (currently there is a 1-2 second delay with digital cameras which can be a problem when animals are passing by quickly). With a digital camera and a large memory card one could take 500 pictures without changing the card, but the batteries would be used more quickly, so there is a trade-off."
– Jan Schipper, WWF Conservation Science Program, Talamanca Mountains and Caribbean slope forests of Costa Rica

Q: "How do you set up a camera trap?"
– Ajay Shrestha, Pokhara, Nepal

A: "Before setting up a trap you have to find the best spot. Once we know roughly where we are going to put the camera we look for the best tree, or pair of trees in some cases, to attached the traps. We look for game trails, small creeks, ridges and other places where we think we have the best chance of getting a photo. The camera trap system is basically just a medium-sized black waterproof box, with a 'heat in motion' sensor and camera inside. When something warm (like a mammal) crosses the beam, it takes a photo - so the box needs to be close to the ground. The "dry" box ensures that the camera, sensors and film stay dry - and in an area that gets up to 18 feet of rain per year - this is very important. Then we attach the trap to the base of a tree (1-2 feet off the ground) using a piece of webbing (like a belt), and lock it on with a cable lock. We use a laser beam to aim the trap across where we want the animals to trigger the camera. Finally we take one photo to make sure it works then leave it for a few weeks."
– Jan Schipper, WWF Conservation Science Program, Talamanca Mountains and Caribbean slope forests of Costa Rica

Q: "How much does it cost to setup and use a camera trap?"
– Robin, Pittsburgh, PA

A: "Camera traps consist of either a digital or 35mm film camera, usually the small 'point-and-shoot' variety, a housing to hold the camera, and an infrared-sensor. The trap is usually set up along a path known to be used by animals, with the infrared sensor and its receivor shooting across the path. When an animal (or human!) passes through the infrared beam a photo is taken. Depending on the type of camera (digital or film) camera traps typically cost between $200-$400 USD. The costs of field maintenance differs by country, but usually involves one of our field staff (or nature reserve staff) to check the camera an average of once a month."
– Colby Loucks, WWF Conservation Science Program

Q: "How long does it take to check your camera traps?"
– Paul, Arlington, VA

A: "A good day of checking camera traps takes about 10 hours. Get up early, get back late. Some trips are seven days long, and others are three. Every day is different and full of surprises. Some days - surprise! - you can't even cross the river to get back to your vehicle."
– Jan Schipper, WWF Conservation Science Program, Talamanca Mountains and Caribbean slope forests of Costa Rica