Every November, monarch butterflies arrive in the mountain forests of central Mexico to hibernate for the winter, having travelled up to 2,800 miles from Canada and the United States. Their two-month journey is the second longest migration of all known insects.

In the most recent migration, fewer of the orange- and red-winged monarchs made it to the end of the journey than ever before. The monarch butterfly population in Mexico was the lowest ever since 1993 (the year scientists started to monitor monarch butterfly colonies), according to research just released by the WWF-Telcel Alliance and the Monarch Butterfly Biosphere Reserve Office of the Mexican government.

The research shows a 43.7% decrease (nearly three acres) in the total amount of forestland occupied by monarchs in and near Mexico’s Monarch Butterfly Biosphere Reserve. The research was conducted over several weeks in December 2013 and the decrease is in relation to December 2012 research. 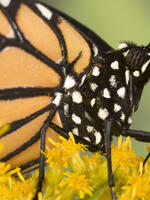