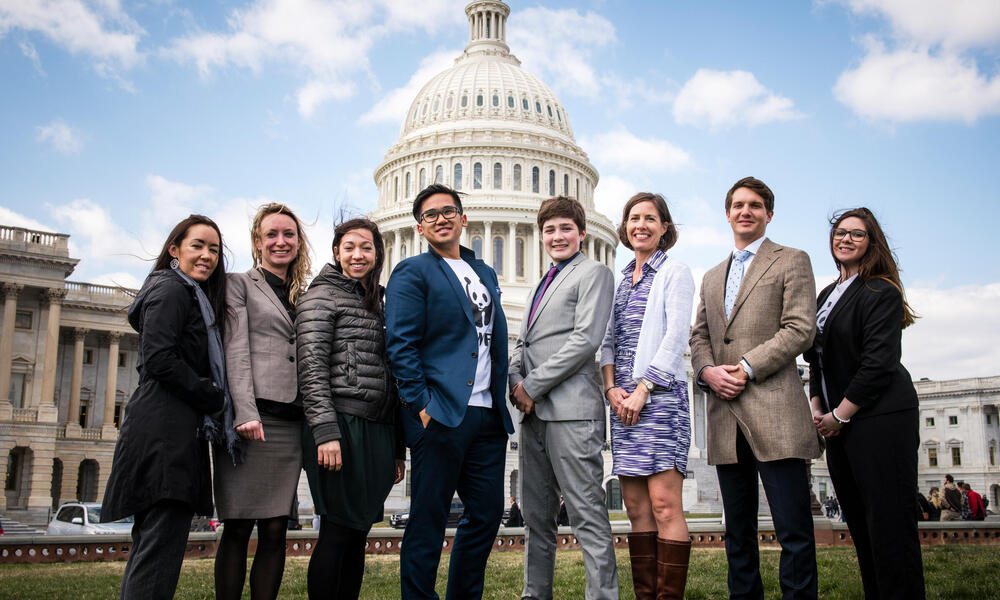 A group of Marylanders wended through a narrow underground passage painted in peach and punctuated by a series of doorways leading to halls and rooms unknown. The path led them to a stone spiral staircase and when they reached the top, a door swung open to a far grander space: The United States Capitol.

“We’re letting our representatives and senators know that we are here. We are going to show up and do our part. We care.”

Here they would meet with Representative Steny Hoyer—a Maryland Congressman—to share their thoughts on the most pressing environmental threats facing our planet and thank him for his support of international conservation funding.

Activists from around the country assembled on Capitol Hill for WWF’s Lobby Day 2018 to persuade lawmakers to maintain the amount of funding the United States government provides for international conservation programs. Altogether they made their voices heard through nearly 80 meetings with representatives, senators, and congressional staff.

“Being in those meetings speaking with staff, speaking with representatives, and understanding how our government works was such an amazing experience,” said Christopher Pham, a WWF Panda Ambassador from Maryland. “It gave me a peek behind the curtain to realize that these are people, too, and whether it’s a representative or the staff or other activists, people care. And knowing that I’m not alone—that we’re not alone—in this fight is something I’ll take away.”

Meeting with representatives in person is one of the best ways to affect change. It lets them know their constituents care and are paying attention, making them more likely vote to continue US supports for these vital efforts.

A history of support
The US government has long been a leader in international conservation and encouraged other countries to cooperate on efforts to conserve wildlife, habitats, and natural resources, particularly in the developing world. The foreign assistance budget is less than 1% of the federal budget, and conservation funding is even smaller—less than 1% of that 1%. The programs funded through the international conservation federal budget help countries manage their natural resources sustainably, crack down on illegal wildlife trafficking, and combat the illegal trade of timber and fish. This assistance overseas helps prevent future conflicts, strengthen our relationships abroad, and create a brighter economic and natural future for both other nations and ourselves.

Activists rising
Throughout the day, activists expressed their passion for conservation through a personal lens. An entomologist tied insect populations to the health of forests; a seventh-grader described a class field trip to the Chesapeake Bay that helped spark his interest in the natural world; a woman from Hawaii explained how what happens in the ocean in one place impacts life thousands of miles away.

Together, their voices made a striking impression in the halls of Congress.

“Yesterday, we opened doors for conservation,” said Sara Thomas, director of activism and outreach for WWF. “As I walked the halls of Congress, participating in several meetings alongside our supporters, I watched as Panda Ambassadors transformed into seasoned activists, telling their story and hosting important conversations with congressional staff across party lines. I witnessed a sea change of hope as relationships between activists and congressional leaders were established and common bonds formed over the need to protect our planet for a better future.”

For the Maryland group making their way to legislators through elegant walkways and hidden shortcuts, the power of Lobby Day 2018 was clear. Both the sheer number of activists who joined them in their cause and the positive response from their representatives proved that using your voice matters.

“Putting face time in and showing up is a big deal,” said Amanda Jorgensen, a Panda Ambassador from Maryland. “We’re letting our representatives and senators know that we are here. We are going to show up and do our part. We care.”

Want to get more involved in WWF's conservation work? Become a Panda Ambassador.