Orangutans in Sumatra learn to live in the wild 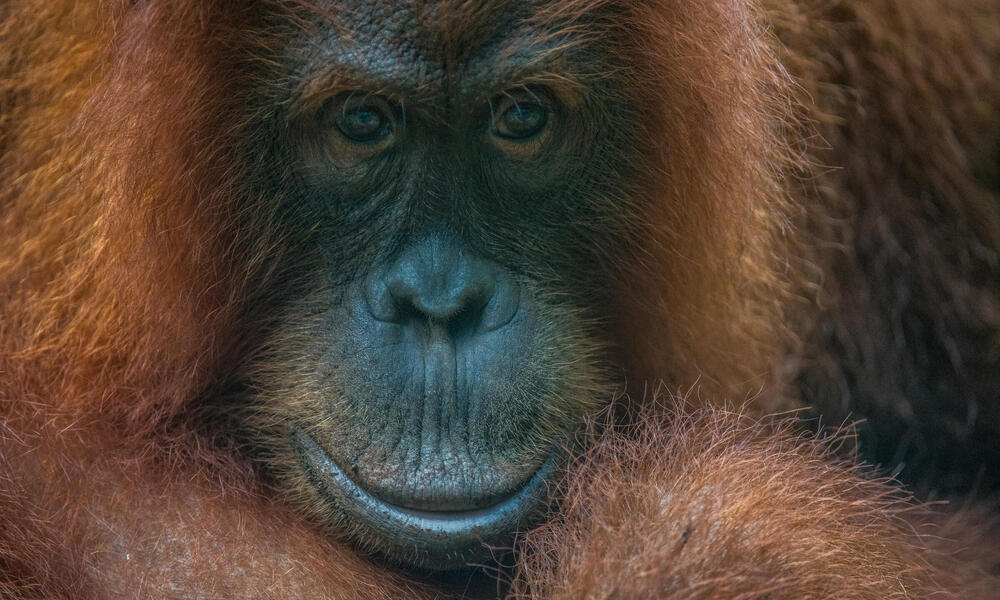 Willy clenches a vine with her feet and dangles upside-down, letting her lanky arms hang slack. As she pushes herself forward, the vine starts swinging. She’s satisfied with this for a minute or two before an adjacent tree becomes more appealing. She wraps her arms around it, frees her legs, and rapidly slides down the trunk, groundward.

The uniformed young man who’s been standing watch nearby moves toward her, grunting Eh! Eh! Eh! His tone is soft but admonishing. The orangutan contracts into a ball and squats atop some brush at the base of the tree, whimpering.

Orangutans spend roughly 90% of their time in the tree canopy; it isn’t normal for Willy to want to spend much time on the ground. Willy is a student, so to speak. She’s learning how to be wild. The 12-year-old Sumatran orangutan was taken from her mother at a young age and illegally kept in a Sumatran household as a pet before being rescued. Now, at the Frankfurt Zoological Society’s Orangutan Rehabilitation Center, she’s one of dozens of orphaned orangutans taught how to feed and fend for themselves in the lowland rainforests of central Sumatra—skills they never had the chance to pick up from their mothers.

The center is located in an area of Sumatra known as Thirty Hills, a tract of increasingly rare tropical forest here that is home to orangutans, elephants and tigers as well as local communities. The Orangutan Project, the Frankfurt Zoological Society, and WWF are working together to help manage and protect this 100,000 acres of forests. Most of the rehabilitation center’s pupils, like Willy, are former pets. But that’s not because of a booming illegal orangutan trade. According to Peter Pratje, who directs FZS’s Sumatra work, the main reason orangutans are captured and sold is the widespread conversion of natural forests across the Indonesian island.

“Orangutans in the illegal market are a side effect of deforestation,” Pratje says. “Hardly anyone would go into the forest to intentionally poach a baby orangutan. It wouldn’t pay off. But when people go into the forest to clear it, they come across a little baby and try to take advantage and get it. Which will only work if you kill the mother.”

To rescue captive or orphaned orangutans, the center relies on an extensive network of local contacts and law enforcement officials. Once primates arrive at the center, they progress through a series of lessons designed to teach them everything from how to climb trees to more complicated tasks like finding fruit and building the nests wild orangutans sleep in every night. 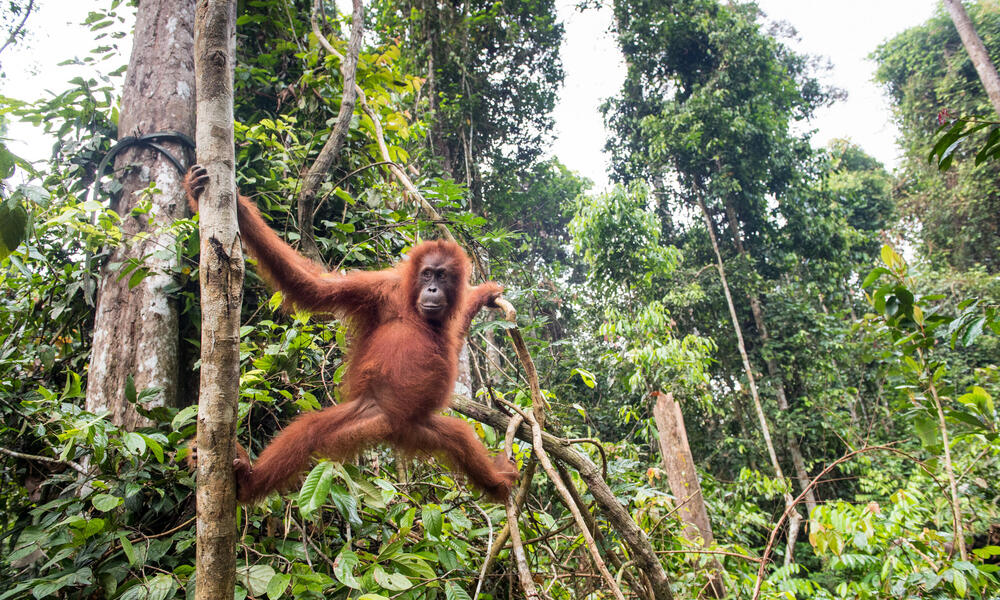 Willy is a 12-year-old Sumatran orangutan learning how to feed and fend for herself. She was taken from her mother at a young age and illegally kept in a Sumatran household as a pet before being rescued. Now, she’s learning life skills at the Frankfurt Zoological Society’s Orangutan Rehabilitation Center.

When they’re ready to start spending long periods of time alone, pupils at the center are still carefully tracked by technicians--most of whom come from nearby villages—to make sure they’re getting proper nutrition and not trying to revert to what they may have learned from humans. Every orangutan who “graduates” is tagged so it can be easily monitored.

“Even after they’re released, the orangutans still know to come back to the center when they get sick or  injured,” says Andhani Widya Hartanti, one of the veterinarians for the center. Hartanti is currently on site because an eight-year-old named Dora got sick and needed her attention, but she says the orangutan is recovering quickly. “When an orangutan that was sick becomes healthy again, that’s my happiest moment at work,” Hartanti adds.

Only between 6,000 to 10,000 Sumatran orangutans are estimated to remain in the wild, making them critically endangered. Beyond its immediate goal of rehabilitating and releasing rescued orangutans, FZS is working toward two bigger, longer-term goals: Establishing a healthy new population of these endangered primates in the forests of Thirty Hills, where no orangutans were present before FZS began its work here, and protecting those forests for future generations of orangutans.

So far, the center has released 170 orangutans into the wild, making 30 Hills a rare success story for this species. The goal is to reach 350—the minimum required for a stable population—in the next two decades. But when asked how many orangutans this jungle could shelter, Pratje estimates 4,000.

“Thousands would be the minimum carrying capacity,” he says. “When we were deciding where to establish this new population, for me, we had to work here, because it’s exceptional to have such a large area of lowland rainforest.”