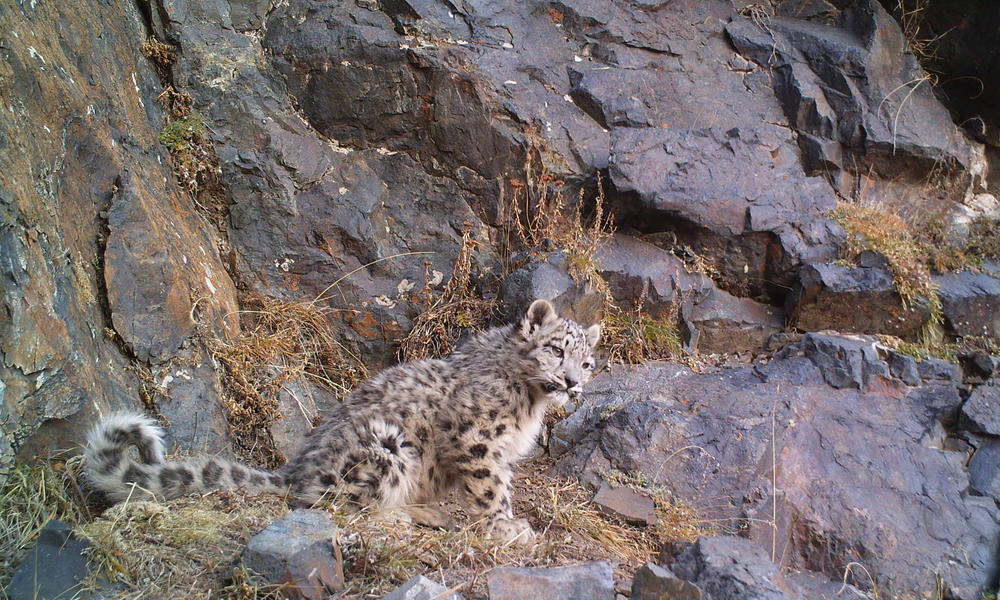 Atop the windy, frozen steppes of Mongolia’s Khar Us Lake National Park, Byambatsooj guides his herd through the rocky canyons of Khovd Aimag’s Jargalant Khairkhan Mountain. An outsider might think he is lost or wandering aimlessly. But Byambatsooj knows the mountain inside and out: every cliff and spring, where to find each kind of plant, and the locations favored by rare species like argali (the Asiatic bighorn sheep), Siberian ibex, and Altai snowcock, the primary diet of local snow leopards.

This knowledge, combined with his respect for snow leopards—the spotted phantoms of the mountains—makes him the ideal “citizen scientist,” able to put his skills and passion to use protecting the grasslands and mountain both he and the snow leopard call home.

This region that Byambatsooj knows so well endures some of the world’s harshest winter weather. As climate change intensifies, the frequency of livestock-killing winter snow disasters, known as “dzud” in Mongolian, is increasing. Such disasters can have a huge impact on Byambatsooj’s community and their pastoral way of life as well as on local wildlife. If Byambatsooj and his community fail to adapt to climate change impacts, one of planet’s last remaining nomadic cultures could disappear forever along with the endangered snow leopard.

However, WWF has found a way to protect the snow leopard while also benefiting nomadic herders. As part of the USAID-funded Conservation and Adaptation in Asia’s High Mountain Landscapes and Communities (AHM) project, local herders like Byambatsooj are now being trained and equipped to collect basic data on the remote mountains they know better than anyone else.

Photos obtained from camera traps enable scientists to estimate how many individual snow leopards inhabit a mountain, track where their travel routes, and provide insight into movement of their prey species. While the cameras are self-contained, they do need to be regularly checked to make sure they are working.

Enter the nomadic herders. Byambatsooj, the youngest herder to be trained, is responsible for maintenance and data retrieval from seven camera traps. The data he collects benefits both wildlife and herders because it helps WWF study the snow leopard population and develop methods for reducing livestock kills by snow leopards. And since he began capturing images of Jargalant Khairkhan’s snow leopards, he is even more motivated to protect snow leopards and their prey.

“We never hunt the snow leopard, even if they attack our livestock,” said Byambatsooj, adding “we are very happy for the involvement of local herder communities in this action. We are all obliged to care for and safeguard the camera traps placed on the mountain,”

In addition to addressing environmental issues in a way that benefits both local communities and ecosystems, the Asia High Mountains project is also working to build transnational dialogue on snow leopard protection and other environmental issues. WWF hopes that by empowering local residents like Byambatsooj, the project will inspire others to work for the protection of Asia’s high mountain landscapes